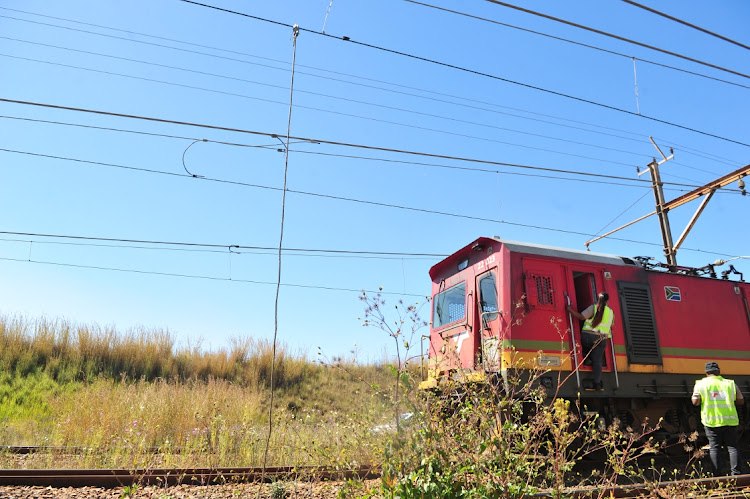 Workers from Transnet fix a section of a railway in Spring, Ekurhuleni, in this file photo. Picture: THULANI MBELE

The United National Transport Union (Untu) and the SA Transport and Allied Workers Union (Satawu) said their members had rejected the offer, which was one percentage point higher than Transnet had put on the table.

“We have just sent communication now to the bargaining council to say we’ve had quite a bit of response and the response was to reject the offer,” John Pereira, deputy general secretary of Untu, said on Thursday.

“Both unions have rejected the mediator’s recommendation of 4% … the unions want one thing only and that is a certificate to strike,” Satawu general secretary Jack Mazibuko said.

Mazibuko said the parties had been in wage talks at the Transnet bargaining council since March. “But we couldn’t reach consensus among ourselves because the employer was initially offering a zero percent increase. The negotiations deadlocked after three rounds of talks. We then roped in an independent mediator to help us broker a deal.”

Satawu, which represents about 18,000 workers at Transnet, has been demanding a one-year 15% wage increase across the board. It also wanted the state-owned company to put a moratorium on retrenchments during the duration of the wage hike deal.

“We took the 4% proposal to our members. Unfortunately it was rejected, so we didn’t have any option but to request a strike certificate from the mediator. We expect the non-resolution certificate within seven days from now,” said Mazibuko.

Transnet said it believed the non-binding offer recommended by the mediator, though unaffordable, was acceptable as a means to arrive at a quick settlement, given the “current operational and financial challenges the company continues to face”.

“The demand by the unions is simply unaffordable in its current form,” Transnet said, adding that any solution must have due regard to the sustainability of the company.

SA faces a raft of crippling strikes over wages, from the public sector to city waste removers, as unions try to eke out the most for their members in a pandemic-battered economy with huge unemployment.

Steve Harris, general secretary of Untu, the majority union at Transnet representing more than 26,000 workers, said his union had been demanding a 7% wage increase.

“We rejected the mediator’s proposal for a 4% wage increase, even though Transnet indicated they are willing to implement it,” said Harris.

“We have now requested a strike certificate from the mediator. So, let’s see what happens.”

The certificate will allow the two largest unions at Transnet, representing more than 75% of the total workforce of about 48,000 staff, to give the company 48 hours’ notice before embarking on a protected strike.

Any prolonged strike at the state-owned company in charge of SA’s port and rail freight network could affect key exports of automobiles, grain and mineral ore just as the country tries to get its struggling economy working again.

“We will decide when is the best time to strike so we have maximum impact,” Pereira said.

JOHN DLUDLU: Between hope and results jobs are lost and services fail