Tom Moyane: I was the best Sars commissioner in democratic history

In Moyane's 700-page application to the Constitutional Court, he takes aim at Ramaphosa, Gordhan, and the Nugent and Bham inquiries 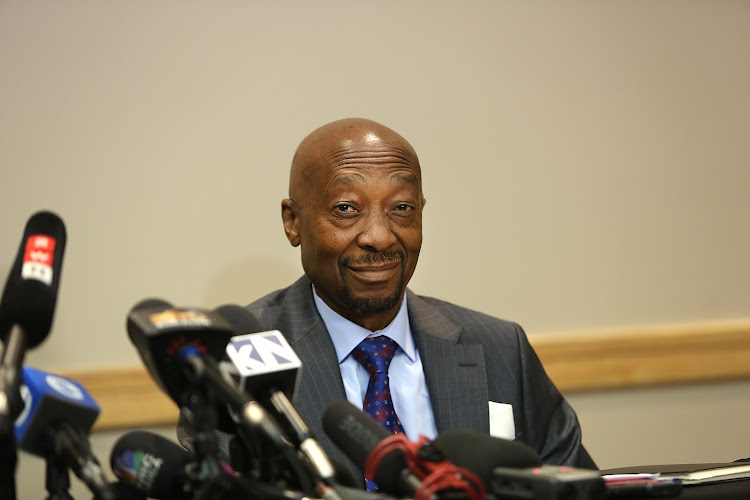 Tom Moyane says he was the most successful SA Revenue Service (Sars) commissioner in democratic history – and argues that President Cyril Ramaphosa’s treatment of him amounts to a violation of the constitution‚ and Ramaphosa’s oath of office.

“By any lawful measure or standard, my tenure at Sars was the most successful in the democratic era. For example, I was the first and only commissioner of Sars in the history of the institution to reach the psychologically important revenue milestone of R1-trillion and to break that hitherto elusive barrier three times in a row,” Moyane said in a 700-page application filed at the Constitutional Court on Monday.

He has also revealed that Sars commission chairperson Judge Robert Nugent wrote to his lawyers in September‚ and told them that he intended to “recommend to the president‚ by the end of September 2018‚ that ‘in the interest of Sars and the country‚ (commissioner Moyane) should immediately be removed from office and be replaced by another person as commissioner’.”

In the application‚ Moyane challenged the fairness and legality of both the Nugent inquiry‚ and the inquiry into the misconduct charges against him by advocate Azhar Bham.

He also took aim at public enterprises minister Pravin Gordhan‚ who he said targeted him out of “either envy or downright jealousy” and the mistaken belief that he was behind the Sars “rogue unit” claims made against him.

Moyane also handed over an audio recording of Gordhan calling him “cheeky” and claiming that he (Moyane) believed he was God. He maintains that Gordhan despises him and is therefore conflicted and should not have been the person to make the case for his dismissal.

“The latter reference carries racist and condescending undertones as outspoken or assertive black people are usually referred to by other races as ‘cheeky k****rs’ or such other insulting terms.

"For a grown man like myself to be referred to as ‘cheeky’ by another person in the same age group as I am (I am 65 and Gordon is 69) was particularly hurtful‚ demeaning and an affront to my human dignity and self-worth‚” Moyane stated in court documents.

He added that Gordhan accused him of “being connected to the leadership of the Hawks and the NPA” and needing to “grow up” - comments he found to be disrespectful.

Moyane went to the Constitutional Court to object to the misconduct hearing against him‚ and Nugent’s Sars inquiry‚ being conducted at the same time.

He wants his misconduct inquiry to be decided through oral evidence‚ and is fighting Ramaphosa’s “decision to deny me my right to an oral hearing and/or cross-examination of witnesses‚ alternatively to make the right of cross-examination subject to the discretion” of Bham or Nugent.

Moyane argued that Ramaphosa should not have appointed Michael Katz as a member of the Sars Commission‚ as Katz had worked as Ramaphosa’s lawyer and was therefore conflicted.

He also argued that Ramaphosa unlawfully “abdicated” his powers to Gordhan‚ “who is not legally authorised to act as he did in respect of the disciplinary inquiry and who is in any event further disqualified due to his conflict of interests and proximity to the issues as a relatively recent commissioner of Sars and his legendary hostile and disrespectful attitude and conduct towards me”.

Moyane further argued that his challenge to the fairness of the Bham and Nugent inquiries should not be perceived as an attempt by him to avoid answering to the charges against him.

Ramaphosa suspended Moyane in March. He was later charged over his alleged mishandling of a Financial Intelligence Centre report on his former second-in-command Jonas Makwakwa; unauthorised bonus payments to his staff; allegedly misleading parliament over the Makwakwa investigation; and instructing Sars employee Helgard Lombard to feign illness and not co-operate with the KPMG investigation into the so-called Sars “rogue unit”.

In his affidavit before the Constitutional Court‚ Moyane gave his response to these charges for the first time.

• “This charge is simply a cut-and-paste job derived from a persistent complaint made by a non-governmental organisation known as Corruption Watch. It is a far-fetched witch-hunt”.

• His disclosures of a Financial Intelligence Centre report raising flags over Makwakwa were “done in the proper and bona fide discharge of my fiduciary duties as both the accounting officer and the accounting authority of Sars‚ in terms of section 9 of the Sars Act”.

• “This charge would have long and easily been disposed of in a fair process.”

On the allegations of unauthorised bonus payments being made to Sars officials‚ Moyane maintained:

• That the payments were authorised by the minister of finance‚ and were paid because “the collection target for the 2015/16 year had been exceeded”.

• “In light of the above‚ it boggles the mind how the president and/or Gordhan can genuinely believe that I can ever be found guilty on this charge. They must be legally presumed to know that the charge is baseless and hopeless.”

On the charge that he misled parliament‚ Moyane argued:

• “It is now a matter of public record that subsequent to the issuing of the charge sheet‚ parliament informed the relevant treasury officials that this charge was baseless because parliament was never ‘misled’ by anything‚ I told them. If this is denied‚ the necessary Hansard transcript will be procured.”

On the accusation that he told Lombard to feign illness and not co-operate with the KPMG investigation‚ Moyane said:

• “This charge is illogical and‚ with the greatest respect‚ contrived‚ manufactured and objectively unsustainable.

• “It is based on not one but two false premises: firstly‚ that I was the inventor of the affected employees’ alleged anxiety about attending the KPMG investigation when he was the source thereof and I am no medical doctor.

• “Secondly‚ it is common cause that I advised him to attend the very same inquiry at a later stage‚ hardly the actions of somebody who is instructing non-cooperation‚ as alleged.”

The Constitutional Court has yet to decide whether it will grant Moyane direct access.