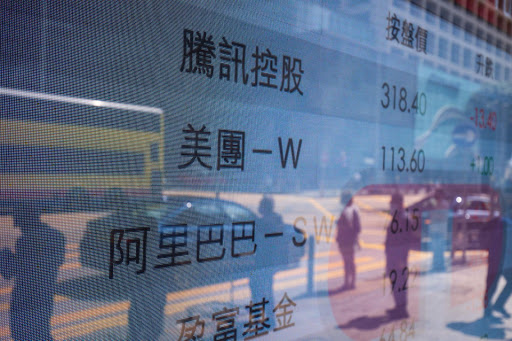 Sydney — Asian share markets were struggling to sustain even a minor rally on Monday after shockingly weak data from China underlined the deep damage lockdowns are doing to the world's second-largest economy.

China's April retail sales plunged 11.1% on the year, almost twice the drop forecast, while industrial output dropped 2.9% when analysts have looked for a slight increase.

The risks have been to the downside given new bank lending in China hit the lowest in nearly four-and-half years in April.

China's central bank also disappointed those hoping for a rate easing, though Beijing on Sunday did allow a further cut in mortgage loan interest rates for some home buyers.

News that Shanghai is relaxing some of its lockdown restrictions offered only cold comfort to investors.

Chinese blue chips shed 0.4% in reaction, while commodity currencies took a knock led by the Australian dollar, which is often used as a liquid proxy for the yuan.

MSCI's broadest index of Asia-Pacific shares outside Japan were still up 0.2%, though that followed a 2.7% slide last week when it hit a two-year low.

Japan's Nikkei clung to gains of 0.6%, having lost 2.1% last week even as a weak yen offered some support to exporters.

Both are far from last year's highs, with the S&P having fallen for six consecutive weeks.

Sky-high inflation and rising interest rates saw US consumer confidence sink to an 11-year low in early May and raised the stakes for April retail sales due on Tuesday.

A hyperhawkish Federal Reserve has driven a sharp tightening in financial conditions, which led Goldman Sachs to cut its 2022 GDP growth forecast to 2.4%, from 2.6%. Growth in 2023 is now seen at 1.6% on an annual basis down from 2.2%.

“Our financial conditions index has tightened by over 100 basis points, which should create a drag on GDP growth of about 1pp,” said Goldman Sachs economist Jan Hatzius.

“We expect that the recent tightening in financial conditions will persist, in part because we think the Fed will deliver on what is priced.”

Fears that all this tightening will lead to recession spurred a rally in bonds last week, which saw 10-year yields drop 21 basis points from peaks of 3.20%. Early Monday, yields were easing again to reach 2.91%.

The pullback saw the dollar come off a two-decade top, though not by much. The dollar index was last at 104.560, and within spitting distance of the 105.010 peak.

In cryptocurrencies, bitcoin was last up 2% at $30,354, having touched its lowest since December 2020 last week after the collapse of TerraUSD, a so-called stablecoin.

In commodity markets, gold was pressured by high yields and a strong dollar and was last at $1,811 an ounce having shed 3.8% last week.

Data on Monday painted a dire picture for the world’s second-largest economy, which is still grappling with a wave of Covid-19
Markets
1 month ago

Miners rebounded after recent losses, lifting the all share index 2%
Markets
1 month ago

‘A lot of fund managers have cut their equity allocations and raised cash, though we think this is a correction rather than a bear market’
Markets
1 month ago
Next Article