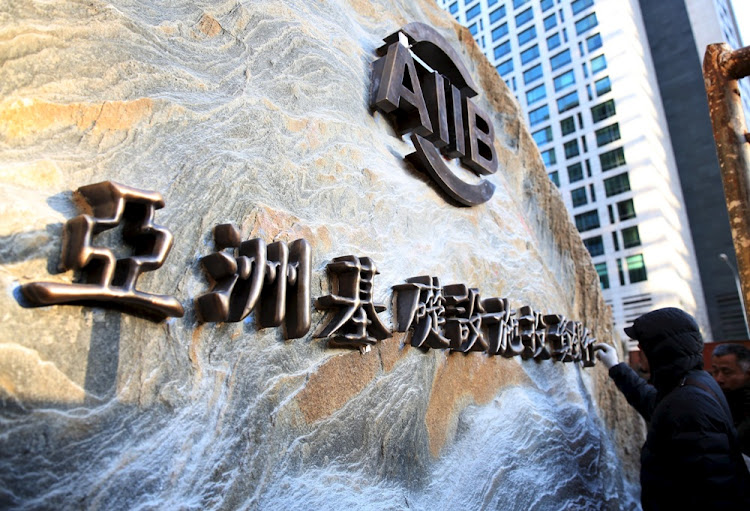 The headquarters of the Asian Infrastructure Investment Bank in Beijing, China. Picture: REUTERS

Singapore — Chinese stocks led Asian markets higher on Monday as investors bet on a steady recovery for the world’s second-largest economy, though caution about the fate of US stimulus kept the dollar firm and a central bank policy tweak unwound some of the yuan’s gains.

“If capital is moving on relative growth rates, then China is looking quite attractive,” said Chris Weston, head of research brokerage Pepperstone in Melbourne. Equities are cheap, yields advantageous and the outlook solid, he said.

“From a virus perspective as well, we’re seeing concerns in Europe, while China is considered a quasi-safe haven.”

China has returned from an eight day Mid-Autumn festival with investors encouraged by a robust rebound in tourism and ebbing coronavirus cases.

Qingdao city said on Monday it will conduct Covid-19 tests for the entire population of more than 9-million people over five days after a small number of new cases.

Elsewhere, in the US Midwest, infections are at record levels and the World Health Organisation is urging fresh curbs for Europe.

Coronavirus aid plans in the US are also in disarray, with the Trump administration on Sunday calling on Congress to pass a stripped-down relief bill while talks on a more comprehensive proposal were again at an impasse.

S&P 500 futures wobbled either side of flat in the Asia session, while European futures edged higher.

“The economic fallout of Covid-19 has accelerated the relative decline of the US as the world’s economic engine,” said ANZ chief economist Richard Yetsenga. “It is also increasing the centrality of Asia — and particularly, of China.”

Chinese blue chips have gained nearly 17% this year, compared with an almost 8% gain by the S&P 500. Foreigners’ buying of Chinese government bonds hit its fastest pace in more than two years last month.

In currency markets, a 0.4% drop in the yuan dragged the China-sensitive Australian dollar lower and underpinned small but broad gains for the dollar against other majors.

The People’s Bank of China has scrapped a requirement for banks to hold a reserve of yuan forward contracts, removing a guard against depreciation.

Traders said that suggested authorities were discomfited by recent gains in the currency. However the lack of an aggressively weaker setting of the onshore trading band cooled some of those concerns and the yuan pared losses a little.

The yuan is up more than 7% since late May and had shot higher on Friday as investors wagered that a Joe Biden presidency would drive smoother Sino-US relations. It last sat at 6.7211 per dollar in onshore trade.

“We continue to expect a stronger yuan on the back of our expectation of solid Chinese growth and favourable interest rate differentials between China and the US,” Goldman Sachs’ analysts said in a note, with a 12-month yuan forecast at 6.50.

In commodity markets, oil prices were back under pressure after the resolution of an oil workers strike in Norway and the resumption of production after a storm in the Gulf of Mexico.

Gold held steep Friday gains at $1,927 an ounce as investors stuck with bets that US stimulus would eventually arrive and drive inflation to the benefit of bullion.

The US bond market is closed on Monday for Columbus Day.