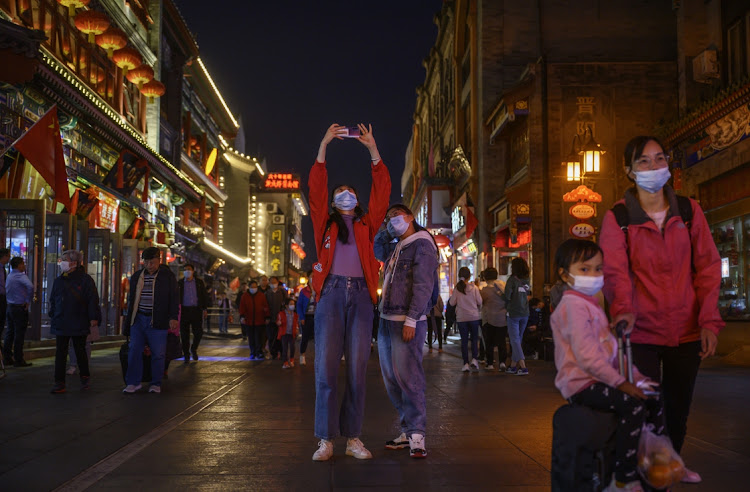 Chinese tourists take photos as others walk in a busy shopping area on October 8 2020 during the final day of the 'Golden Week' holiday in Beijing. Picture: Kevin Frayer/Getty Images

With the Covid-19 pandemic largely under control in China, the Golden Week holiday is putting on display the country’s confidence in its economic rebound and its public health measures. Through the first four days of the week-long holiday that started October 1, about 425-million local trips were taken, according to the ministry of culture and tourism, nearly 80% of 2019’s level.

The surge of activity stands in stark contrast to the rest of the world — the global tourism industry is expected to lose at least $1.2-trillion in 2020 — and underscores the relative strength of China’s economic recovery. As of September, the OECD forecast a 1.8% expansion this year, putting China alone among the Group of 20 on pace to expand.

That positive outlook assumes the country can avoid another wave of coronavirus and the aggressive lockdowns China’s used to quash it. As millions criss-cross the country during the holiday that marks the founding of the People’s Republic of China in 1949, no virus tests or quarantines required, the risks grow. Late in September, China opened its borders to foreign nationals holding valid residence permits.

“There is undoubtedly a risk in allowing mass tourism to resume and, in some ways, this is an early exercise in what the rest of the world will have to go through as global travel restarts next year,” said Nicholas Thomas, associate professor in health security at the City University of Hong Kong.

China hasn’t reported any local virus infections since August 15, though it found two asymptomatic cases in late September, and the government has eased almost all of its peak-Covid-19 travel restrictions. The ban on group tours was lifted in the middle of July, every district in every city has been designated “low-risk” and coronavirus test results are no longer required for cross-province travel.

“We have gone at least six weeks without reporting a single confirmed case domestically, which means the environment accessible by ordinary people is virus free,” said Wu Zunyou, chief epidemiologist at the Chinese Center of Disease Control and Prevention, at a briefing in Beijing last week. “The chance of you running into an asymptomatic person is very very low, almost negligible.”

In a McKinsey survey conducted before the holiday, more than one in three Chinese consumers said they were planning a trip during the Golden Week.

Other countries are more reluctant to endorse a return to 2019-style vacationing. South Korea, for example, which has seen daily new cases hover around 100 a day, tightened social distancing rules for two weeks of back-to-back holidays starting in late September. European cities and countries are instituting new restrictions in an effort to fight a new wave of the pandemic sparked by summer travel.

In China, tourists seem confident. “I’m not worried about the virus,” said Zora Li, who plans to fly via Beijing to the southern Chinese province of Guangxi with her two children and her parents, their first trip of 2020. “I don’t have a choice. The kids can only travel during vacation.”

She wasn’t the only one ready for a change of scenery. Flight bookings for the holiday were up 11% compared with 2019, according to a report from travel data and analytics agency Cirium. Reservations for domestic hotels began rising near the end of August, and prices soared: As of September 10, the average hotel booking cost around 20% more in 2020 compared with 2019, according to data released by travel booking site Qunar.com Inc.

Ride-hailing apps Didi and Dida crashed as the holiday period began on September 30, according to local news agency Xinhua. Some 11.7-million passengers travelled by train on October 3, down just 15% from 2019.

Tickets at the Badaling section of the Great Wall sold out by midmorning on October 3, the first time daily tickets have sold out since late March. Popular sites from the Forbidden City in Beijing to the Mogao Grottoes in Gansu province were fully booked before the holiday started.

Other Chinese destinations saw an influx of domestic tourists who might have otherwise spent the week abroad. While foreign travel isn’t explicitly banned, the lack of flights and onerous quarantine and testing requirements for re-entry have discouraged most people. Tibet, Xinjiang and Ningxia were among regions where spending rose fastest on October 1 and 2, based on China Unionpay data reported in Xinhua. Hotel spending in Tibet more than doubled from a year earlier, and food-and-beverage spending jumped 49%.

Kickstarting economies hobbled by the pandemic has been tricky. In the US, Japan and almost everywhere else, eagerness to reopen the economy — or reluctance to close it — has led to new waves of infection, often worse than the first.

Since the coronavirus emerged in the central Chinese city of Wuhan late last year, the government has used its unchecked authority to lock down cities, require testing and track the movements of infected people. Still, as recently as late last month, Qingdao, a coastal city, found two asymptomatic coronavirus cases, the first in five weeks without local transmission. Some frozen seafood imports have also been banned, after the virus was found in some samples.

“We will only know how successful China has been 2-3 weeks after the holidays as we see how many new infections emerge,” Thomas said. “If they manage to avoid an upsurge in cases, it will be evidence that China is truly moving into a post-Covid period.”

The spectre of Covid and the fragile recovery are still taking a toll. Even travellers may not be ready for a Golden Week spree. Through the first four days of the holiday, tourism revenue was 312-billion yuan, according to the ministry of culture and Tourism, down 31% from the same period last year.

And plenty of people are still staying home. Shirley Zhang, an auditor in Shenzhen, cancelled her travel plans this year, including a long-planned trip to Japan.

“This year is so difficult for everyone,” she said. “Some of my friends lost their jobs lately. For first time in my life, I feel I need to save some money for future uncertainties.”

SA investors have benefited greatly from their exposure to Tencent, but should look further in the Middle Kingdom
Opinion
9 months ago