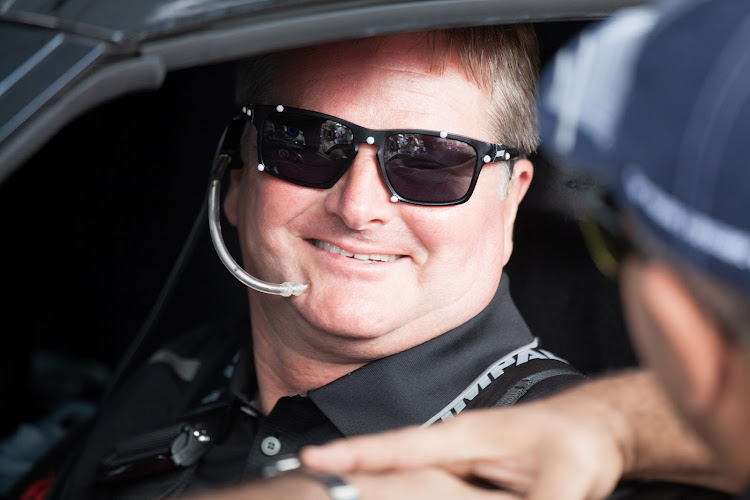 Sam Schmidt is able to drive without using his arms and legs. Picture: REUTERS

Goodwood — Since the age of five, Sam Schmidt's ambition was to be an IndyCar champion. And he achieved it, winning the Indy 500 at the Las Vegas Motor Speedway in 1999. A glorious racing career beckoned.

But months later, on January 6 2000, Schmidt crashed during a practice lap at the Walt Disney World Speedway in Orlando, severely injuring his spinal cord.

Doctors told him he would likely be on a ventilator for the rest of his life. He was off the ventilator in six weeks, but was diagnosed as a quadriplegic, paralysed from the neck down.

“It was my passion my entire life and then this happens and it kind of turns things upside down,” Schmidt told Reuters.

While the prospect of him racing again was gone, Schmidt founded Schmidt Peterson Motorsports in 2001. His team, now known as Arrow McLaren SP, has won 12 IndyCar races.

Still, the urge to race prompted Schmidt to embark on an exciting proposition: building a race car that he could drive despite his disability.

Beginning in 2013 and working with engineers from tech company Arrow Electronics, the result is the SAM Car, SAM standing for “semi-autonomous mobility”.

“Arrow came along with this idea of building a car for somebody that can't use their arms and legs. And it was an amazing experience,” Schmidt said.

“What I didn’t anticipate was this overwhelming feeling of normalcy because I was in control. And literally to that point in my life, there was really not a lot that I controlled. I needed help for everything. So the fact that I’m steering it, I'm using the brake and the gas and going as fast as I want is exhilarating. So it’s fantastic.”

On July 8 the latest version of the SAM Car — a modified a V8 Chevrolet Corvette C8 Stingray — took to the racecourse at Goodwood in southern England, driven by Schmidt himself.

He steers via a racing hat and sunglasses fitted with infrared sensors, which are motion-tracked by infrared cameras mounted on the dashboard to detect his head movements.

To accelerate and brake Schmidt uses his breath, inhaling and exhaling through a “sip-and-puff” pressure sensor.

While Schmidt has a co-driver alongside him with their hands hovering over the wheel to take control in an emergency, he has managed to navigate a number of race tracks in the US and now the Goodwood course as part of its annual Festival of Speed motoring event. Other milestones include going over 320km/h, and driving his wife on a date. 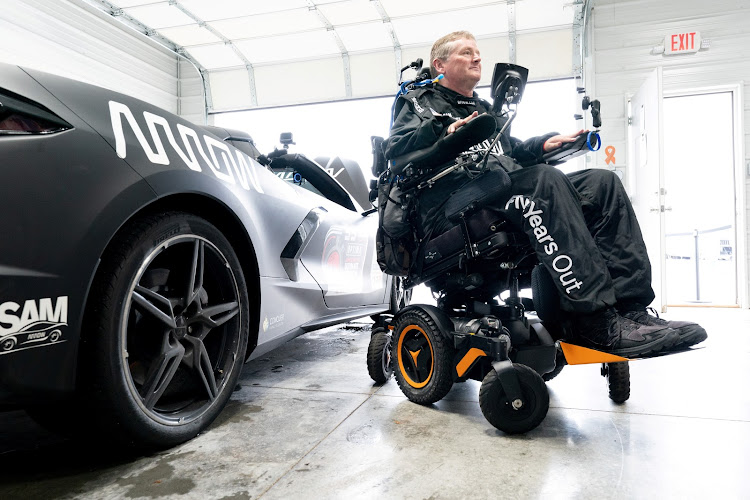 To accelerate and brake Schmidt uses his breath, inhaling and exhaling through a ‘sip-and-puff’ pressure sensor. Picture: REUTERS

“In the last few months I wore [it] my to daughter’s wedding. So, by far the best day in 21 years,” Schmidt said, adding that there wasn’t a dry eye in the house when he danced with his newlywed daughter.

The tech that he and Arrow are pioneering could have a wider impact on helping people with disabilities, he added.

“This technology could be transferred to industrial purposes to get people back to work. You can drive a harvester, you can drive a train, you could drive a forklift or a crane.”

As for what his future holds, Schmidt is aiming high.

“The sky’s the limit. I hear they’re selling tickets to the space station, maybe that’s it!”

Helio Castroneves won the Indianapolis 500 for a record-equalling fourth time on Sunday, in front of the largest crowd to attend a sporting event in ...
Life
11 months ago

Keep open the door, keep challenging, and you will eventually get the chance, says the 43-year-old
Sport
1 year ago

Helio Castroneves won the Indianapolis 500 for a record-equalling fourth time on Sunday, in front of the largest crowd to attend a sporting event in ...
Life
11 months ago

Formula One history will be made on Saturday, which features the first qualifying race without pitstops
Life
10 months ago
Next Article