Castroneves says he is not yet done 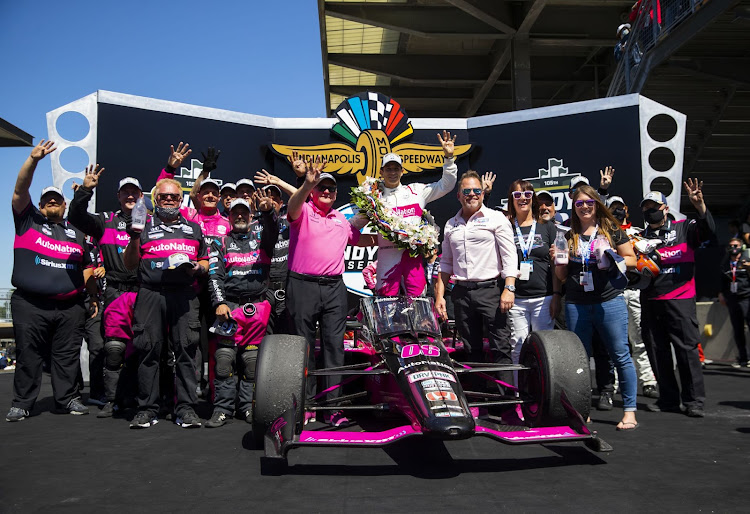 Hélio Castroneves won the Indianapolis 500 for a record-equalling fourth time on Sunday, in front of the largest crowd to attend a sporting event in the US since the start of the Covid-19 pandemic.

The 46-year-old Brazilian surged to the front with two laps to go and held off a challenge from hard-charging Spanish young gun Alex Palou to claim victory and join AJ Foyt, Rick Mears and Al Unser as the only four-time winners of the “Greatest Spectacle in Racing”.

It was the 21st Indy 500 start for Castroneves but his first with Meyer Shank Racing and just as sweet as his other wins in 2001, 2002 and 2009 with powerhouse outfit Team Penske.

Castroneves, known as 'Spiderman' celebrated the victory the way he had all his others, parking his car on the front straight and climbing up the protective fencing punching his fist into the air as the crowd roared.

It was the type of celebration denied to last year's winner Takuma Sato, who heard no cheers at a race run at an empty track due to Covid-19 restrictions. “I love Indianapolis, the fans they give me energy,” said Castroneves, fighting to be heard over the wild celebrations.

“This is absolutely incredible, right now I am just excited. I knew I was going to get a fight, I had to put the elbows out but I tell you what, man, what an incredible feeling.”

With the race back in its traditional US Memorial Day holiday weekend slot, after last year's event was moved to August due to the pandemic, a sold-out crowd of 135,000 excited fans flocked to the Indianapolis Motor Speedway (IMS).

While the crowd was well shy of the close to 400,000 that IMS can accommodate, the roars returned to the Brickyard as fans partied in the sunshine.

Castroneves will not replace 47-year-old Al Unser as the oldest winner of the Indy 500 but his victory adds to a golden oldies theme running through the 2021 sports calendar.

His win follows Phil Mickelson becoming the oldest man to win one of golf's majors at the PGA Championship last week and Tampa Bay Buccaneers Tom Brady the oldest quarterback to win a Super Bowl. “It's not the end of it, it's the beginning,” said Castroneves.

“Tom Brady won the Super Bowl, Phil Mickelson won the PGA so the older guys still got it, still kicking the younger guys' butts, we're teaching them a lesson. I think I still got it don't you think?”

The race took a bizarre turn during the opening pit stops when Stefan Wilson had a spin entering the pit lane and slammed into the wall, bringing out the day's first yellow flag.

With the race under caution, pole sitter Scott Dixon, who was running out of fuel, was allowed in for emergency service but stalled in his box and could not get his Chip Ganassi Honda to re-fire. Dixon was eventually able to return down a lap but could not overcome the setback and finished 17th.

Another IndyCar veteran, Graham Rahal, who was running near the front, also fell victim to a pit-stop mishap when his crew did not secure his left rear tyre, sending the American spinning hard into the wall as he rejoined the race.

There was more trouble for a pair of Australians — Will Power overshooting his box and spinning while his Team Penske team mate Scott McLaughlin was hit with a pit-road speeding penalty.

Switzerland's Simona De Silvestro, the only woman in the 33-car field, also took a spin on her final pit stop and finished 31st.​

The seven-time, premier-class world champion has fared poorly this season and is lying 19th
Life
1 year ago