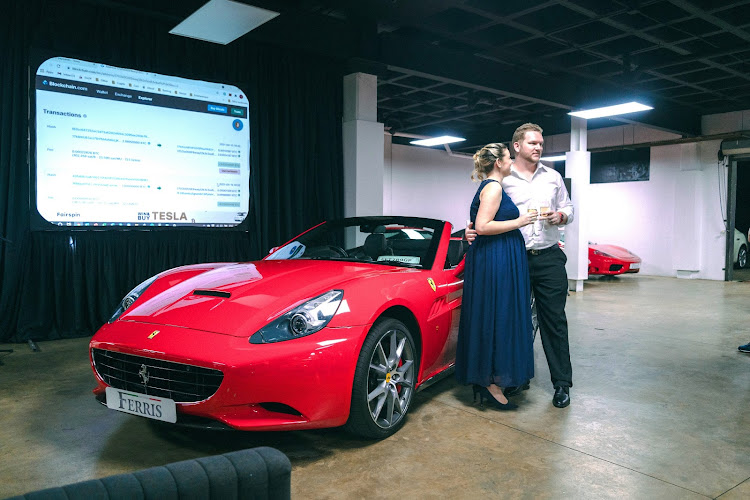 The first vehicle to be bought using bitcoin in SA is a pre-owned Ferrari California model. Picture: SUPPLIED

Ferris Cars of Fourways made history in mid-April 2021 when it became the first car dealership in SA to sell a car in exchange for bitcoin. And, what’s more, it was not just any car, but a pre-owned Ferrari California.

The occasion was marked by a glamorous cocktail function attended by influential guests at Ferris Cars’ recently revised showroom in the Broadacres Shopping Centre. The highlight of the evening was the purchase of the beautiful California by one of the guests, live on-screen, demonstrating a bitcoin transaction to the captivated audience.

“The idea of selling Ferraris using bitcoin as a currency was in fact mooted a few months ago,” said Ferris Cars co-owner and director Tommy Roes. “We announced on March 5 2021, through our newsletter, that we would now be accepting bitcoin as a method of payment.”

“Not only were we the first SA dealership to take this step, but to put things into a global context, less than three weeks after our announcement, Elon Musk announced on Twitter that Tesla’s were now for sale using bitcoin. So we beat Tesla to the draw by nearly three weeks!”

However, Musk’s recent antics have poured cold water over this unprecedented occasion. Within days of rubber stamping the sale of Tesla models using cryptocurrencies, he made an unexpected about-turn, suspending acceptance of bitcoin payments and other cryptocurrencies and criticising the token for its energy usage.

This led to a fall in the value of bitcoin. Reuters reported that the cryptocurrency was about 9% down on the week, “though up from a Wednesday plunge towards $30,000”.

China’s central bank also inflicted further damage on Tuesday after carrying a statement warning against using virtual currencies and on Thursday it emerged the US may require crypto transactions of $10,000 or more to be reported to tax authorities.

But Ferris Cars was the first dealership in SA to formally announce the direct acceptance of the decentralised currency as a method of payment. Within days of that first Ferrari being driven out of the Ferris Cars showroom in mid-April, the dealership says it has facilitated a second bitcoin transaction for a private customer buying a Ford Mustang, and days after this transaction, they were facilitating yet another bitcoin payment deal on a Mercedes-Benz G-Class.

Popular SUV has been polished for better performance and cushiness whether in town or out on safari, writes Phuti Mpyane
Life
1 month ago