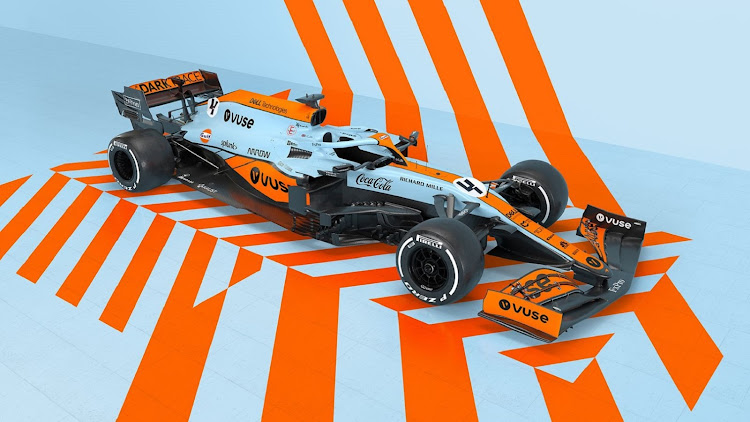 The combination of orange stripe and powder blue has a particular resonance for motorsport fans. Picture: MCLAREN RACING

Woking, UK — McLaren’s cars, drivers and team will sport a retro look for the return of Formula One’s Monaco Grand Prix this week with a special one-off livery in the colours of sponsor Gulf Oil International.

The combination of orange stripe and powder blue has a particular resonance for motorsport fans, with Hollywood actor Steve McQueen famously racing a Gulf-liveried Porsche 917 in the 1971 movie 'Le Mans'.

The Gulf connection with McLaren dates back to 1968 and the team's late founder Bruce McLaren.

“It’s cool. I didn’t need another reason to get excited for Monaco so I've got to control myself, save some energy for next weekend,” said Australian Daniel Ricciardo, a winner in the principality with Red Bull in 2018.

British team mate Lando Norris told reporters after a presentation at McLaren’s old Albert Drive factory that the car, usually decked out in papaya and a darker blue, would be the best-looking on the grid.

“I said to [McLaren Racing CEO] Zak [Brown] it was even better than our current livery but he didn’t sound so convinced by that,” said the 21-year-old, whose helmet design will be “old school, a bit of a throwback”.

Monaco, a glamorous highlight of the season since the 1950s, was not held last year due to Covid-19 and will be the championship’s first street race since 2019.

“At this point we only intend to run it at Monaco. I think if you’re going to have a special livery you need to keep it special,” Brown said of the paint job that will also feature on merchandise.

“We don’t want to confuse the fans and kind of lose our identity. But at the same time I think to do something a few times a year that is special creates some excitement and some additional engagement with the fans.”

The team will be wary of what happened to Mercedes in 2019 when the champions celebrated their 125th year in motorsport with a retro livery and dressed team members in period costume.

The weekend at Hockenheim turned into a nightmare, with team boss Toto Wolff saying afterwards they would not be “making any other big splashes in future”.

Brown, whose team are holding off Ferrari for third in the championship after four races, had no such concerns.

“When these guys put their helmets on, they’re going to forget what the race car looks like other than a steering wheel and two tyres in front of them,” said the American. “I’m not worried at all.”

Monaco is the fifth round of the 2021 Formula One championship, with Mercedes’ Lewis Hamilton leading Red Bull’s Max Verstappen in the title chase. McLaren’s Norris and Ricciardo are respectively fourth and seventh in the standings.

To mark the film’s release, Shelby SA is auctioning an iconic car
Life
1 year ago
Next Article