New BMW 4 Series gets a grilling 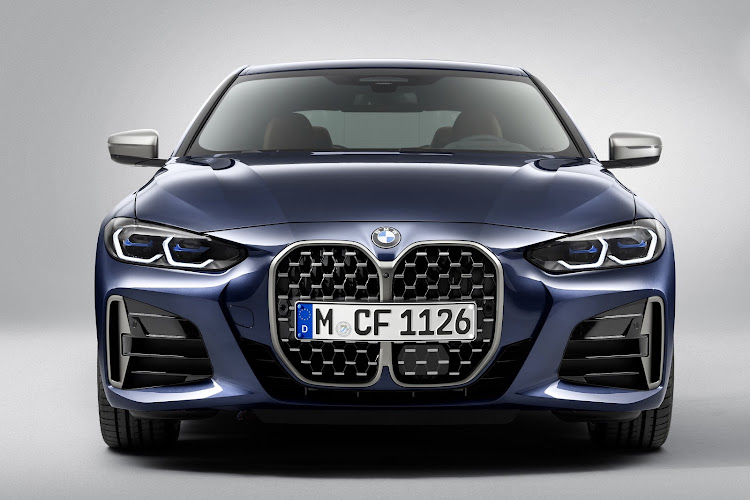 BMW has launched its new 4 Series Coupé, and it turns out it wasn’t kidding about that colossal kidney grille when it showed us the concept car last year.

It isn’t a delayed April Fools’ joke; the bucktoothed uber grille is real, and follows the new BMW zeitgeist of gaping front facades as recently demonstrated in the BMW X7 and facelifted 7 Series.

Except this grille, rather than just being very wide, is vertically elongated and reminiscent of the air intakes of BMW’s 2000C cars of the 1960s and also the 328 of the 1930s.

It’s a styling gamble that will be watched with keen interest over the coming months. Will the 4 Series be shunned by buyers for being too quirky, or will the design quickly settle into normality like Audi’s large singleframe grille did a few years back?

We shall see. For its part, BMW says the new 4 Series two-door coupé “exudes unadulterated driving pleasure from every angle”. Apart from the grille, the car has become visually more distinct from its 3 Series sedan cousin with a more stretched look, smaller rear side windows, and a prominently tapered rear roofline with muscular shoulders. 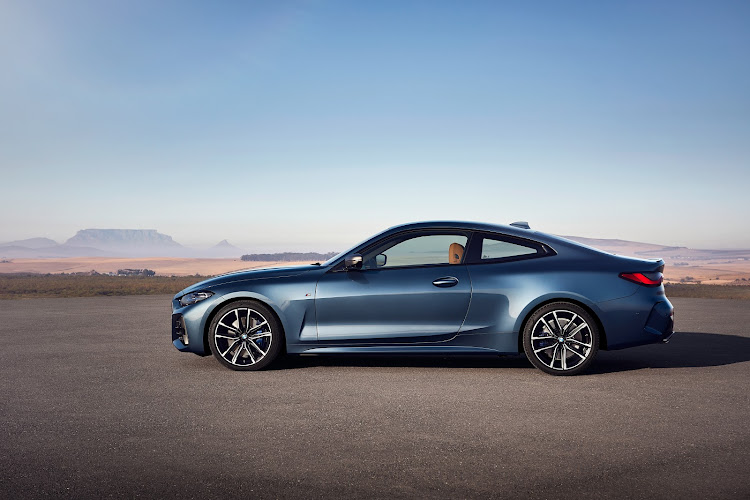 The car is 128mm longer than the old 4 Series and has increased in wheelbase by 41mm, while it’s also 27mm wider and 6mm higher.

The centre of gravity is 21mm lower than the 3 Series sedan’s, and tweaks to the chassis geometry give the new 4 Series Coupé a sporty character all of its own.

Inside, the cabin follows the modern, high-quality theme of the 3 Series including a fully digital instrument cluster and infotainment with advanced voice control. Sports seats and a newly designed sports leather steering wheel come standard, and the rear has two individual seats instead of a bench, making this a pure four-seater. 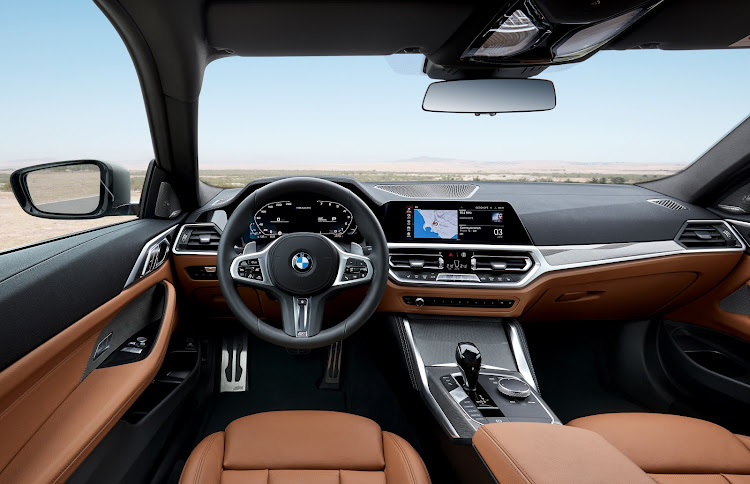 Smart and digitised interior is much the same as the new 3 Series. Picture: SUPPLIED

Behind that gnashing grille is a choice of three engines for the local market, and available from the fourth quarter of this year will be the 420i, 420d and 440i xDrive models.

The range-topping 440i xDrive is a mild hybrid car with a 48V starter-generator that provides an additional 8kW electric boost to the 275kW/500Nm six-cylinder 3.0l turbo engine, for extra overtaking or off-the-line acceleration. The starter-generator also improves fuel consumption by assisting the engine while driving at a constant speed.

As part of a vast array of customisation options, an M Sport model is available with features such as even larger air intakes and a prominently contoured rear apron, M Sport suspension, 18-inch M light alloy wheels, knee pads on the sides of the centre console, and an M Carbon exterior package.

A new equipment line available for the first time is the M Sport package Pro which adds items such as 19-inch wheels, eight-speed Steptronic Sport transmission, a rear spoiler and a sporty soundtrack fed into the cabin via a Harman Kardon surround sound system.

Driver assistance systems include a head-up display, front collision warning with brake intervention, and lane keeping assist. The optional Parking Assistant now features the reversing assistant which automatically steers the vehicle over exactly the same route it has last been driven forward, up to a 50m distance.

BMW set to auction M2 CS when it arrives in SA

With only 28 cars headed to SA, an auction is a unique, democratic way to give everyone a chance of owning a special vehicle
Life
10 months ago

This all-wheel driver Beemer is a fine mix of luxury, sophistication and sporting venom
Life
10 months ago
Next Article

Suzuki S-Presso punches above its weight

Suzuki S-Presso punches above its weight