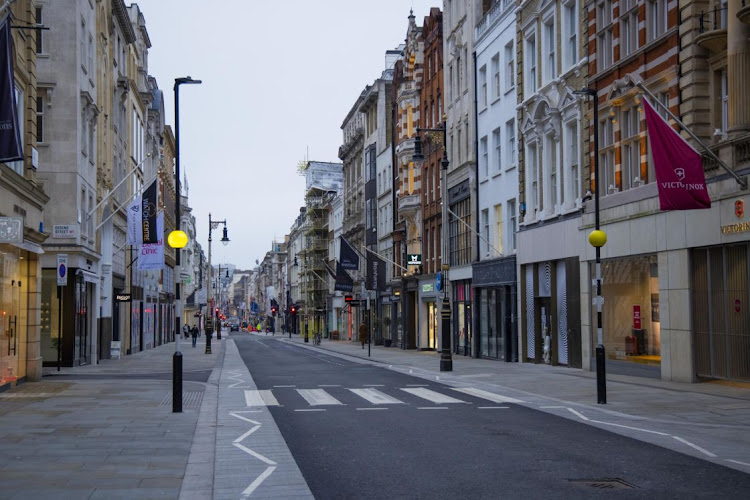 Closed luxury retail stores on Bond Street in central London, Britain. A flood of store closures and deterioration in the quality of the buildings and public spaces along Oxford Street is being aggravated by lockdown restrictions that are decimating foot traffic and driving more shoppers online. Picture: JASON ALDEN/BLOOMBERG

London — Kate Moss brought London’s Oxford Street to a standstill in 2007 when the supermodel posed at Topshop’s flagship store to launch her clothing collection.

Hundreds of shoppers lined Europe’s busiest retail street, trying to get their hands on the Moss range in the 8,300m2 emporium, a retail sensation buzzing with a mix of clothing, food stalls and live DJ tunes.

Now the music has stopped and Oxford Street is once again at a standstill. Topshop closed its doors in January, possibly for good, relegated to an online-only presence under a new owner. A short stroll down the street, Debenhams, a department store with more than 200 years of history, is also shuttered, as are dozens of other shops. In total, at least a fifth of the stores on Oxford Street are now shut and will not reopen after the Covid lockdown ends, according to the New West End Company, a lobby group for the district.

As UK chancellor Rishi Sunak prepares to unveil a budget next week that retailers hope will bring more aid for a sector on its knees, Oxford Street’s reputation as Europe’s premier shopping destination faces its biggest threat in decades. A flood of store closures and deterioration in the quality of the buildings and public space along the near 2km thoroughfare is being aggravated by lockdown restrictions that are decimating foot traffic and driving more shoppers online.

“I am really worried about the West End. There is nobody there, no shops are open and there is no reason to go,” said Brian Duffy, CEO of Watches of Switzerland Group, which sells fine watches and jewellery in shops on Oxford Street and the nearby Bond and Regent streets.

In a bid to stop the rot, the local authority for the UK capital’s West End unveiled plans to “reinvent” the nation’s main street, including a proposal to erect a climbable hill overlooking the Marble Arch landmark. The council is injecting £150m to kick-start the makeover, which includes a plan for more pedestrian space, pop-up parks and a wider range of businesses to reduce the reliance on retail.

Melvyn Caplan, deputy leader of the Westminster council, is optimistic the proposals will help unwind some of the issues that plagued Oxford Street long before the pandemic. The street has been taken over by a mishmash of faceless retail brands and down-market tourist traps. Noisy traffic, few public spaces to relax and a lack of entertainment activities further diminished its appeal.

“Oxford Street used to be at the heart of London’s culture but it has disappeared a bit behind all the retail,” Caplan said.

The demise of London’s top shopping destination is emblematic of major cities struggling to reinvent their main retail spheres. In Berlin, the Kurfuerstendamm long suffered a haemorrhaging of shoppers who favoured smaller boutiques in the fashionable eastern part of the city or gravitated online. Only recently has the street made a comeback with a blend of restaurants, high-end boutiques and bread-and-and butter fashion retailers.

In Paris, the Champs Élysées is trying to reverse years of decline with a $305m plan that pares back the space allotted to cars, increases the area’s tree cover and seeks to encourage more small-scale shops along the avenue’s flanks.

“The Parisians have certainly got their act together,” said Jace Tyrell, CEO of New West End Company. “We don’t want to lose out to our great rival.”

The council does not even need to look as far as Paris to learn how a concerted effort can reimagine a fading street.

At the turn of the millennium, the Crown Estate, the property company that generates income for Queen Elizabeth II, began a regeneration of nearby Regent Street and the Piccadilly Circus area after it became an uninspiring sea of travel agents and tourist shops flogging Union Jack memorabilia.

Today, the street houses flagship stores of global brands including Apple and Burberry Group. Since the pandemic began, the Crown Estate has also widened sidewalks and introduced new greenery and seating areas.

The revamp was made easier by the consolidated ownership of properties on Regent Street, said James Cooksey, director of central London development at the Crown Estate. It is a bonus that Oxford Street does not have, given properties there are in the hands of multiple landlords, complicating a concerted regeneration effort.

Still, with the council pouring resources into the revival, more landlords pulling together and the public raring to go shopping again after months of being stuck at home, Oxford Street has a chance to turn itself around, Cooksey said.

Westminster’s revival plans may get an additional boost from short-term measures in next week’s budget, such as an extension of furlough, an employment-support programme, and relief from a UK property tax that is a heavy burden for many retailers. Such a move would be particularly welcomed by retailers after the treasury abolished tax-free shopping for overseas visitors, which dealt a crushing blow to West End retail.

A third of sales on Oxford Street in 2019 came from Chinese shoppers, data from tax-refund company Global Blue shows. French President Emmanuel Macron has already sought to lure more shoppers to Paris by slashing the value of goods on which VAT sales tax can be reclaimed, to €150 from €175.

For Oxford Street to make a comeback, authorities will need to become more flexible and open up to a new breed of occupiers. Until recently, Westminster Council showed little inclination to adapt, prompting Tesla to close its outlet on the street three years ago after Westminster refused an application to make changes to the building.

In future, the make-up of the street might include technology giants such as Netflix, Google or Snapchat wanting to open “experiential” stores to showcase their brands, said Sam Foyle, co-head of prime global retail team at property consultancy Savills. Samsung Electronics already has a store on Oxford Street, and Apple’s store on Regent Street is one of the company’s busiest in the world.

“Oxford Street looks poor now but there is a lot going on behind the scenes,” said Foyle.

Covent Garden has faced an onslaught of weak economic growth, a pandemic and an economic lockdown
Companies
2 months ago

UK businesses skipped more than £4bn in rent in 2020, which they say was not their fault — but where to from here?
World
2 months ago
Next Article