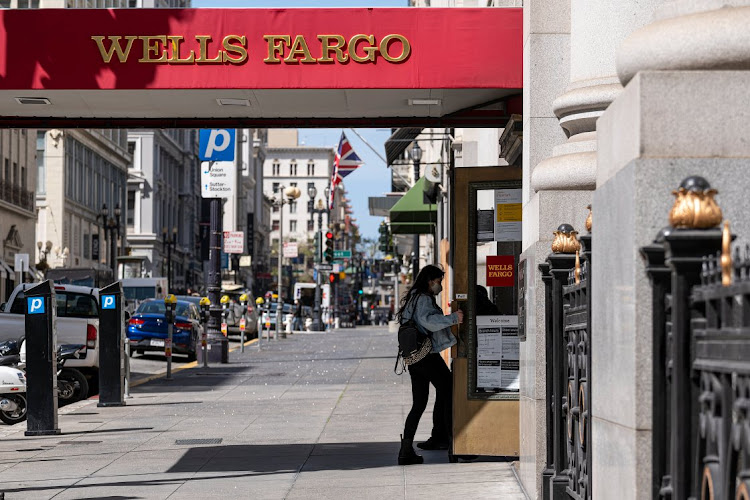 Shares of the company advanced 5.2% after the first-quarter earnings report and comments from Scharf, who said the company is anxious to raise its “quite low” dividend.

Scharf, who took over in late 2019, has focused on streamlining operations and pledged to eventually shave $10bn off annual expenses. The firm announced sales of its asset manager and corporate-trust unit in the first quarter, and said in January that its rail-leasing unit is on the chopping block too. Wells Fargo has said it has more than 250 expense initiatives in the works that will take three to four years.

“We’re in the midst of a multiyear transformation, and I’m confident that our operational and financial performance will continue to benefit from the progress we’re making,” Scharf said on a conference call with analysts.

US lenders are also benefiting from the government’s huge stimulus efforts and an economic rebound that’s kept the worst of the predicted pandemic fallout from materialising. That should continue to boost net interest income, one of the bank’s main sources of revenue, according to CFO Mike Santomassimo. He also said the bank expects additional loan-loss reserve releases if the economy continued on its current trajectory.

First-quarter net income at the San Francisco-based bank rose to $4.74bn, boosted by a larger-than-expected release of loan-loss reserves, according to a statement on Wednesday. Non-interest expenses were $14bn, up from a year earlier and a touch higher than analysts forecast, while net interest income was lower than expected.

The first-quarter results “reflected an improving US economy, continued focus on our strategic priorities, and ongoing support for our customers and our communities”, Scharf said in the statement. “Charge-offs are at historic lows and we are making changes to improve our operations and efficiency, but low interest rates and tepid loan demand continued to be a headwind for us in the quarter.”

JPMorgan Chase, which also reported first-quarter earnings Wednesday, was down 1.2%.

Wells Fargo remains under costly Federal Reserve-imposed restrictions that limit assets to their level at the end of 2017. In one of the first signs of success in the drive to escape the penalty, the company secured the Fed’s acceptance of a proposal it submitted in 2020.

The firm is working to complete the next steps needed to lift the punishment: adopting the plan and undergoing an independent review. Bloomberg reported in December that a number of top executives privately expect Wells Fargo won’t escape the asset cap before late in 2021, while key Fed officials see the process dragging into 2022 or beyond.

“Our work to build the appropriate risk and control environment remains our top priority,” Scharf said in the statement. “This is a multiyear effort and there is still much to do, but I am confident we are making progress, though it is not always a straight line.”

Scharf also elaborated on the firm’s growth opportunities, saying Wells Fargo is working on its credit-card offerings and going after middle-market investment banking “in a different way than we have previously.”

“We’re underpenetrated in credit card given our customer footprint, and we’re working on developing a significantly improved value proposition that we can introduce to the market,” Scharf said.

Largest US bank by assets releases $5.2bn in loan-loss reserves,  adding to windfall
Companies
9 months ago