Porsche may have to settle for as little as €60bn, one of the people said, noting that the owners would not accept anything less 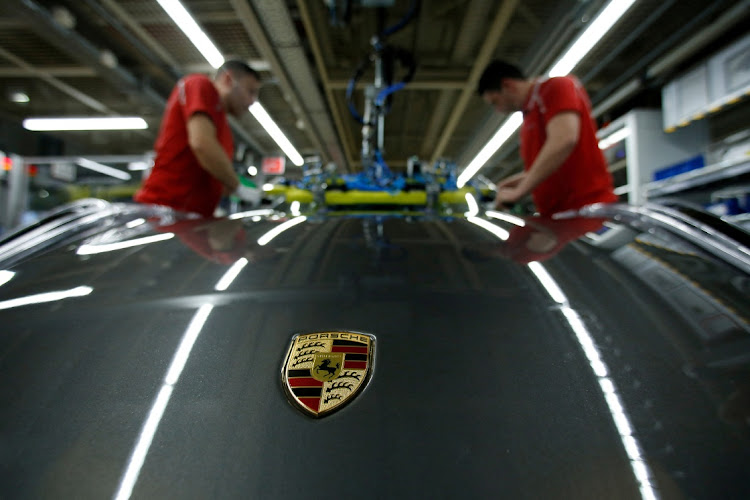 Employees of German car manufacturer Porsche install the windshield of a Porsche 911 at the Porsche factory in Stuttgart-Zuffenhausen, Germany. Picture: REUTERS/RALPH ORLOWSKI

London — Porsche may have to go public at a steep discount if it insists on going ahead as economic obstacles mount, two people involved in the landmark multibillion-euro listing said.

The prospect of a larger than customary discount would be a setback to the controlling families pushing the initial public offering to fund a costly makeover from petrol- to electric-driven sports cars.

Original expectations have been high for the luxury car brand owned by Europe’s biggest carmaker, Volkswagen. Some had valued Porsche at more than €80bn, according to bankers involved.

But the people involved said a bigger-than-usual markdown may now be necessary to secure what could be one of the world's largest stock-market debuts — in the face of war, threat of recession and energy shortages.

Porsche may have to settle for as little as €60bn, one of the people said, noting that the owners would not accept anything less.

The people shared their assessment, amid a wider debate about the price tag for one of Germany’s most prestigious brands unfolding weeks ahead of the expected IPO.

One of the people said owners of the carmaker have different views on how highly it should be valued. A third person involved in the preparations said investors had yet to agree on a valuation formula.

Behind the scenes, however, some investors are wavering.

In June, Bernstein Research put a wide range of possible valuations on Porsche, from €55bn to €100bn.

It set the “fair value” at about €75bn, based on a formula including earnings before interest and taxes (Ebit), calling Porsche "a great company but not Ferrari" because of the latter’s higher margins.

A top-20 Volkswagen shareholder told Reuters it was not keen on the IPO because only a small amount of stock will be sold, giving new shareholders little influence.

The shareholder, asking not to be named, said Porsche would be better off staying within the Volkswagen Group, while the IPO would not "create value" in the long term.

Earlier this week, Porsche CEO Oliver Blume and Meschke were upbeat in their presentations.

Business was robust during the pandemic, Blume said. "There is big need in the capital markets and a lot of money to invest."

Bankers running the deal intend to survey market conditions at the end of August, with a Porsche board decision and an intention to float (ITF) document potentially set for publication soon after, and a view to trading on the Frankfurt Stock Exchange at the turn of the third to fourth quarter, the people said.

A spokesperson for Porsche said there had been no "new decisions" on its IPO plans, while Volkswagen declined to comment.

The listing is happening as Germany’s carmakers seek to loosen the bond with the diesel and petrol motors that won global acclaim and shift towards quieter, cleaner battery models.

Porsche wants 80% of its car sales to be electric by 2030, roughly quadrupling the current level, while Volkswagen has also embarked on an ambitious shift towards electric vehicles, batteries and software. The listing is designed to fund that overhaul.

If the listing does not go ahead or gets through only at a discount, there is less to invest.

A listing would also shift the balance of power at Europe’s top carmaker, Volkswagen, which controls Porsche since a botched takeover attempt of VW more than a decade ago. At the time, the Porsche and Piech families became Volkswagen's most influential investors.

An IPO would win Porsche and its family owners greater control over the sportscar maker, the company has said.

However, the economic hurdles are steep.

Just $2.3bn has been raised on German equity capital markets this year, down 90% on a year earlier, according to Refinitiv data. Only 12.5% of Porsche stock will be in “free float”, and European carmakers’ valuations have plunged since the start of 2022.

Luxury carmakers have been particularly hard hit. Aston Martin’s market cap has lost 57% of its value since the beginning of 2022, while almost a third has been shaved off Ferrari's valuation.

One banker involved said Porsche might be compared to highly rated luxury brands, such as French luxury goods house LVMH.