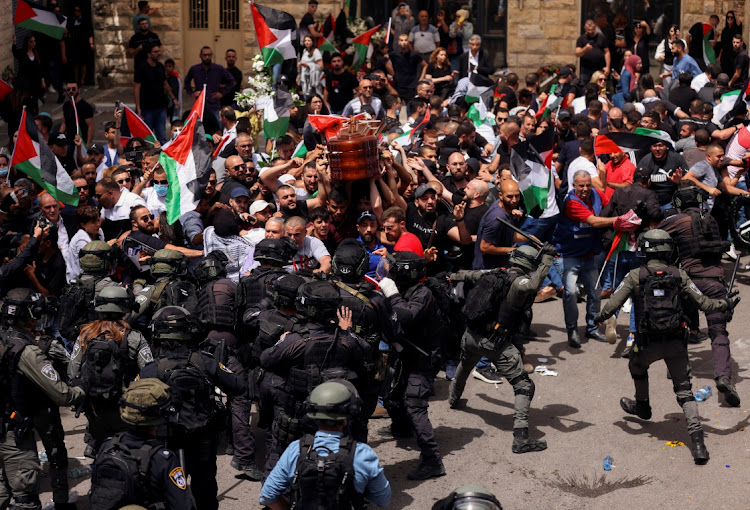 Family and friends carry the coffin of Al Jazeera reporter Shireen Abu Akleh, who was killed during an Israeli raid in Jenin in the occupied West Bank, as Israeli security forces beat and kicked pallbearers, during her funeral in Jerusalem on May 13 2022. Picture: REUTERS/AMMAR AWAD

Ramallah — The Palestinian Authority said on Saturday it would welcome international support in the inquiry into the death of an Al Jazeera journalist, while Israel said it would investigate an eruption of violence at her funeral.

The death of veteran reporter Shireen Abu Akleh sparked an outpouring of grief, and Israel police charged at a crowd of Palestinian mourners carrying her coffin through Jerusalem's Old City on Friday.  Some beat pallbearers with batons and kicked them, drawing international condemnation.

The violence, which lasted only minutes, added to Palestinian outrage about Abu Akleh's killing, which has threatened to fuel tensions that have escalated since March.

Palestinian authorities have described the death of Abu Akleh, who was covering an Israeli raid in the occupied West Bank, as an assassination by Israeli forces.

Israel initially suggested Palestinian fire might have been to blame, but officials have since said they could not rule out it was Israeli gunfire that killed her.

Abu Akleh, who had covered Palestinian affairs and the Middle East for more than two decades, was shot while reporting on an Israeli raid in the occupied West Bank on Wednesday.

The UN Security Council has strongly condemned the killing and called for an “immediate, thorough, transparent, and fair and impartial investigation”. Deputy UN spokesperson Farhan Haq said the scenes were “very shocking” and the EU said it was appalled.

The White House found the images disturbing, press secretary Jen Psaki told reporters, and US officials will remain in close contact with Israeli and Palestinian authorities in the aftermath of Akleh's funeral.

Hussein al Sheikh, a senior Palestinian Authority official, said on Twitter the authority would welcome the participation of all international bodies in its inquiry.

The authority has rejected an offer from Israel, which has voiced regret about Abu Akleh's death, to co-operate in the investigation.

Israel's police said on Saturday it had tried “to facilitate a calm and dignified funeral” and blamed “hundreds of rioters [who] tried to sabotage the ceremony and harm the police”.

“The Israel Police will be looking into the events that ensued during the funeral,” a statement said. Findings from its investigation will be presented in coming days, it added.

The UN said in a statement that human rights experts say that more than 40 Palestinian journalists have reportedly been killed since 2000, with hundreds injured or targeted for violence. It added that Palestinian female journalists also regularly experience violence in the course of their work just for being journalists.

At a hospital in Jerusalem, a Palestinian died on Saturday of wounds inflicted during clashes with Israeli security forces three weeks ago at the al-Aqsa mosque compound.

It was the first fatality from clashes at the sensitive holy site in several years.