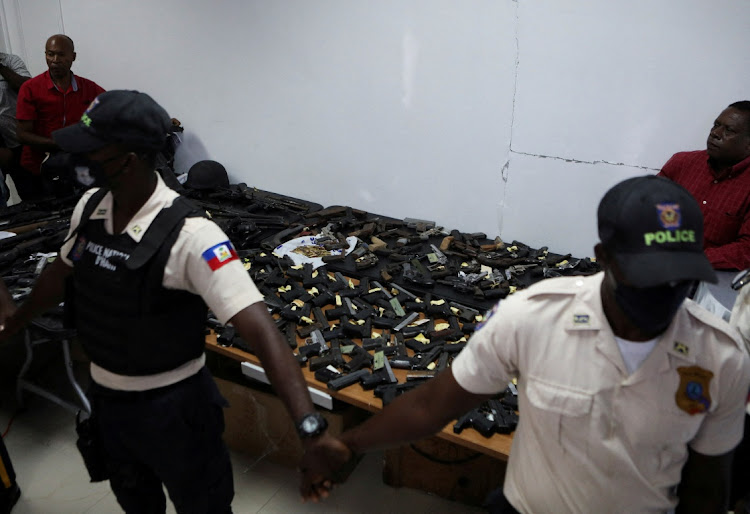 Weapons confiscated in police operations against increasingly powerful gangs are presented to the media, after at least 75 people have been killed in turf wars that broke out two weeks ago between gangs, according to the United Nations Integrated Office in Haiti, in Port-au-Prince, Haiti May 9 2022. Picture: REUTERS/RALPH TEDY EROL

Port-au-Prince — Haitian Jonas Joseph juggled running a busy hairdressing salon and a small bar in the capital Port-au-Prince for five years, allowing him to provide for his young family.

Then the gangsters took over.

“I had to close my business and leave. The most important thing is my safety and that of my family. I’m now living with my cousin, I can’t find work,” said Joseph, 32, a father of two. “There’s only one activity left here: it’s gang activity.”

Joseph is one of thousands of small business owners forced to shut up shop in the Caribbean nation in the past year as rising gang violence and lawlessness cripples the economy.

Mobs dealing in extortion rackets, drugs and arms smuggling, and kidnappings for ransom have grown in power since the assassination of Haitian president Jovenel Moise last July, creating a power vacuum that gangs have exploited.

Criminal groups have become de facto authorities in significant portions of the country, with gang-controlled slum neighbourhoods at the mercy of gun-toting bandits.

In downtown Port-au-Prince — usually a bustling market of clothes and food stalls — shop shutters are down and many street vendors have left after fearing for their lives.

“The downtown area has been converted into a kind of war zone. Heavily armed gunmen regularly take to the streets and innocent people are being killed or kidnapped every day,” said street vendor Jeannette Brutus. “The situation is unbearable.”

But when the armed gang members came several weeks ago asking Brutus to hand over a slice of her earnings, she left the area, and with it her only source of income.

“I had to flee the place. The gunmen would often come to ask me for money. Usually they’d force me at gunpoint to pay what I didn’t even have. I risked death every day, so I decided to stay away,” Brutus said.

She said she knew of several people who had been killed by gangsters for refusing to make extortion payments.

“The government has abandoned the population. We can’t rely on the police or government authorities to protect us,” Brutus said.

Haitian police say they have ramped up street patrols. One heavily armed policeman from a special forces unit deployed to the downtown area this week said despite the dangers, the police are committed to combating the gangs and keeping people safe.

“It’s very dangerous here. Our lives are at great risk because things can turn ugly any time,” said the policeman, who only gave his name as Joel.

“From one moment to the next, bandits can erupt and create chaos, that’s why we firmly stand here, well-armed to face them should they try to do harm to the population.”

At least 148 people have been killed between April 24 and early May during the latest round of gang clashes in and around Port-au-Prince, which is the hotspot of gang violence, according to Haiti’s National Human Rights Defense Network (RNDDH).

Gang members raped women and girls, hacked people to death with machetes, and burned others alive on tyre fires in the streets, the rights group said in a report, while some people were killed after their homes were set alight.

Kidnappings for ransom are also rife, with 1,200 people snatched last year, according to Haiti’s Center for Analysis and Research on Human Rights.

“People are forced to pay extortion money because gang members threaten to kidnap them or their loved ones if they fail to do so,” said Pierre Esperance, the head of RNDDH.

“The problem is that the government is almost totally absent in the areas where gangs operate.”

Haiti police chief, Frantz Elbe, has vowed to fight organised crime and hunt down “all bandits.”

“We’re planning to intervene in places where the population is unable to normally go about its business. We will recover our police precincts so that we may protect the population,” Elbe told a press conference on Tuesday.

He said several police operations in the past six months have led to the arrests of nearly 5,000 people on charges including kidnapping, murder and drug trafficking.

“We're aware of businessmen who are forced to flee the areas they work in because of the gangs,” he said.

“For those who want to go back and reopen their activities, we can’t provide them with any full guarantee when it comes to their safety ... we’re doing the best we can with the meagre means that we have.”

Gang violence comes on top of pandemic-related hardship and a worsening economy, with rising inflation pushing food prices higher and driving hundreds of thousands of Haitians deeper into poverty and hunger.

Together, they have prompted growing numbers of Haitians to leave the island on rickety boats in the hopes of reaching the US to seek safety and better opportunities. Entire neighbourhoods have been abandoned.

Roughly a third of Haiti’s population of nearly 12-million live in extreme poverty, barely surviving on less than $2.15 a day, while about 4-million struggle to eat two meals a day, said Haitian economist Etzer Emile.

Sitting at a street corner in the capital, shoe shiner Jean Marc lamented a decline in customers in recent weeks.

“It’s hard when people have to choose between buying something to eat or cleaning their shoes. Most people prefer to eat,” said Marc, a father of two.

Nearby, Morel Janvier, a street vendor in the downtown area who sells mobile phones and other electronic gadgets, said the security and economic situation are getting worse by the day.

Haiti’s economy is expected to grow by just 0.8% this year, after a three-year downturn that plunged the country into a long recession, said Emile.

“Gang violence has caused the country’s economic situation to worsen,” he said.

“When gangs force people to pay sums of money to let them pass with their goods, it means consumers pay more money for products.”

For business owner Joseph, his hair salon and bar will remain shut until security improves.

“It seems like some evil god has cast a spell on our country. Why do we always have to suffer such misfortunes?” he said.

SA should tighten its borders to fend off xenophobia, UN says