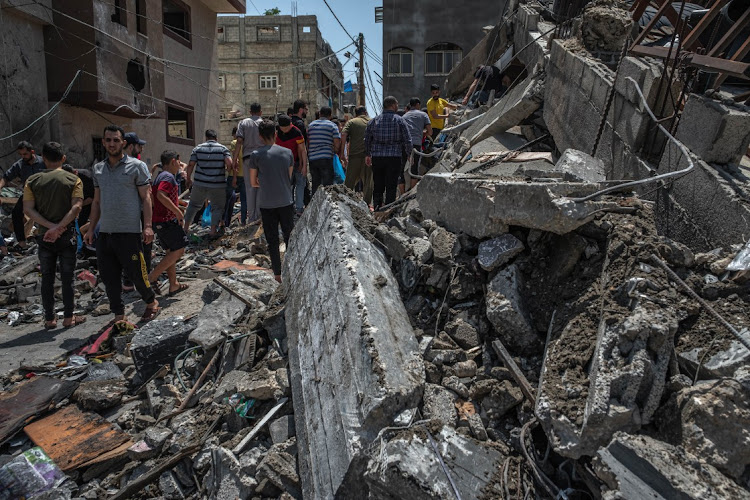 Israel and the Hamas group that rules Gaza agreed to end an 11-day conflict that has devastated large swathes of the Palestinian enclave and sowed chaos in Israel.

Israel’s security cabinet unanimously voted to approve an Egyptian proposal for an unconditional, bilateral truce, Prime Minister Benjamin Netanyahu’s office said in a text message. The ceasefire is to take effect at 2am on Friday, Hamas spokesperson Hazem Qassem said.

A total of 232 Palestinians and 12 people in Israel have been killed in the violence. Efforts to end the hostilities intensified after the US raised pressure on Israel on Wednesday to dial back its onslaught.

Throughout the fighting, militants pounded Israel with thousands of rockets that spread chaos in large parts of the country and sent people scurrying repeatedly for shelter. The violence was the most bruising since the enemies fought a 50-day war in 2014.

The truce alone will do nothing to address the root causes of the Israeli-Palestinian conflict, making future cycles of violence likely

Peacemaking between Israel and the internationally recognised Palestinian Authority broke down seven years ago, and Hamas and some other groups say armed resistance is needed to win back land and rights. Israel, along with Egypt, has blockaded Gaza since Hamas took control there in 2007, confining more than 2-million people to the tiny sliver of land.

While the Biden administration has underlined its support for a two-state solution to the Israeli-Palestinian conflict, it has signalled that it doesn’t plan to invest heavily in trying to resolve the conflict. And the wholehearted embrace of Israel by former president Donald Trump has left Palestinians wary of US mediation.

The hostilities erupted after weeks of clashes between Palestinians and Israeli security forces in East Jerusalem, the holy city at the heart of conflicting sovereignty claims. Israel was evicting Palestinian families from the area. As fighting escalated, it spilt over into deadly clashes inside Israel between Arab and Jewish citizens that were the fiercest in decades.

Though the violence has been quelled by a heavy security presence, underlying Arab grievances over discrimination and Jewish mistrust over allegiance still fester and will pose a challenge to Israel going forward.

Israel appeared intent on inflicting maximum damage in Gaza, launching waves of strikes against underground cross-border tunnels designed for infiltration, rocket stockpiles, militant command centres and a network of subterranean corridors used for combat transport, weapons storage and as hideouts. High-ranking Gaza military commanders and intelligence figures were a major target, and Israel says it has assassinated more than a dozen.

The devastation was greater than any wrought in the three previous wars Israel waged in the territory. While it refrained from a ground invasion, hundreds of aerial bombardments compounded by artillery and tank fire levelled or damaged hundreds of buildings and shattered roads. Power, water and sewerage systems were all disrupted, in part, Israel says, by Gaza rocket fire that fell short.

Some of the attacks took place at refugee camps, hospitals and schools, where Israel accuses Hamas of using human shields to try to protect its military operations. Palestinians say many of the victims were civilians, including dozens of children.

Israel, too, suffered uniquely intense rocket fire that terrorised millions of citizens and disrupted daily life. Dozens of houses were damaged as more than 4,000 rockets launched by Hamas eluded the Iron Dome missile defence system that mitigated the lethality and damage of the fire.

While ordinary Palestinians and Israelis have suffered, leaders on both sides emerge from the conflict in a stronger position.

The fighting and the communal turmoil it unleashed within Israel upended opposition efforts to form a government that would unseat Netanyahu after a March election — the fourth in two years — again produced no clear winner. One prospective partner pulled out of coalition talks entirely and an Arab faction suspended participation.

The rival camp’s aim is to form a government joining Israeli Jews and an Arab Muslim party for the first time in Israel’s 73-year history, overcoming the polarisation that’s been the hallmark of Netanyahu’s tenure.

The prime minister, who is on trial for alleged influence-peddling, has called suggestions he prolonged the conflict for his own political gain “preposterous”.

While the Israeli military dealt a body blow to Hamas’s military infrastructure, the group’s armed resistance to Israel has scored it points domestically, where it is seen as a more effectual fighter against Israel than the rival Palestinian Authority, based in the West Bank and headed by president Mahmoud Abbas. The fighting also gave Hamas bragging rights to have united Palestinians in Gaza, the West Bank and Israel in their struggle for statehood.

After 16 years in power, Abbas has brought the Palestinians no closer to that goal, and in May, he called off legislative elections in which Hamas stood to gain, if not win, polls forecast.

Israel’s ‘forever war’ in Gaza offers disconcerting clues as to what a long-running, non-ground troop based campaign can look like
Opinion
3 weeks ago
Next Article