President Volodymyr Zelensky says more than 1,000 people were inside when the missiles struck 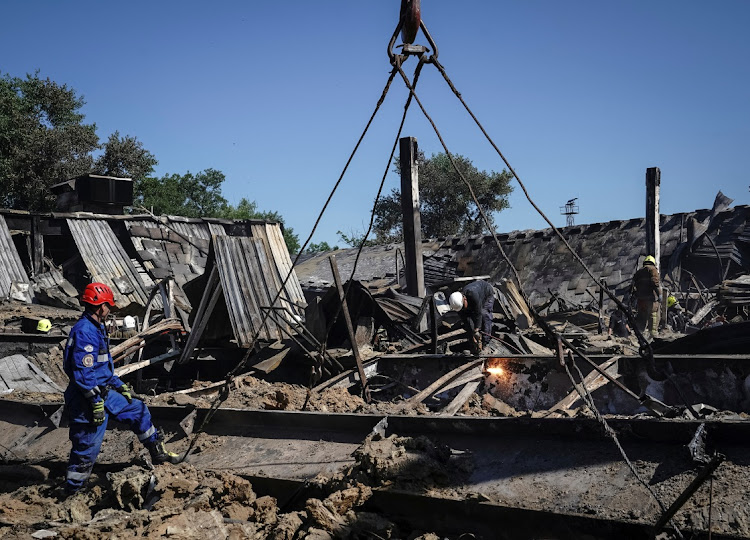 Rescuers work at a site of a shopping mall hit by a Russian missile strike, as Russia's attack on Ukraine continues, in Kremenchuk, in Poltava region, Ukraine June 28 2022. REUTERS/ANNA VOITENKO

London — Russia on Tuesday denied hitting a shopping mall in the Ukrainian city of Kremenchuk with missiles, saying that it had struck a nearby depot of US and European arms, triggering an explosion that ignited a fire in the mall.

Ukraine said at least 18 people were killed on Monday by an intentional Russian missile strike against the shopping centre. President Volodymyr Zelensky said more than 1,000 people were inside when the missiles struck.

Russia’s defence ministry rejected Ukraine’s account, saying it had hit a legitimate military target in the city, and the shopping centre was not in use.

Reuters was unable to independently verify the Russian account or Zelensky’s claim that Russia intentionally hit the shopping centre to target civilians.

“In Kremenchuk, Russian forces struck a weapons depot storing arms received from the US and Europe with high-precision air-based weapons,” Russia’s defence ministry said in a daily statement on the war. “The detonation of stored ammunition for Western weapons caused a fire in a non-functioning shopping centre located next to the depot,” it added.

The Group of Seven (G7) industrialised nations called the hit a Russian war crime, while Zelensky said it is “one of the most defiant terrorist attacks in European history”, accusing Russia of directly targeting civilians.

When asked about the attack on Kremenchuk, the Kremlin referred reporters to the defence ministry statement. Russia accuses Ukraine of carrying out attacks on civilians in Donbas.

Rescue efforts continued on Tuesday to recover survivors and bodies, with dozens reported injured and taken to hospital.

Ukraine has reported a sharp escalation in Russian attacks in recent days. On Sunday, a residential building in Kyiv was hit in the first attack on the capital since early June.

Ukraine said Russian missiles also hit the eastern cities of Kharkiv and Lysychansk on Monday in one of the bloodiest days for civilian casualties in weeks.

Speaking hours after the first casualties were reported from Kremenchuk on Monday, Russia’s deputy ambassador to the UN, Dmitry Polyanskiy, accused Ukraine of using the incident to gain sympathy ahead of a June 28-30 summit of the Nato military alliance and pointed to “striking discrepancies” in Kyiv’s account of the incident.

Russia has repeatedly denied targeting civilian areas during its four-month offensive against Ukraine. The UN says at least 4,700 civilians have been killed since Russia invaded on February 24.

President Vladimir Putin has repeatedly said that the main immediate reason for what he casts as a “special military operation” is to protect the Russian-speakers of Donbas from persecution and attack by Ukraine.

Ukraine and its Western backers say Russia is waging an unprovoked war against a sovereign state that is fighting for its existence. Kyiv says Russia’s claim of persecution of Russian-speakers is a baseless pretext for the invasion.

About 14,000 people were killed there between 2014 and 2022, when Russia invaded Ukraine, according to the UN high commissioner for human rights.

Nike is making a full exit from Russia three months after suspending its operations there, the US sportswear maker said this week as the pace of ...
Business
1 month ago
Next Article