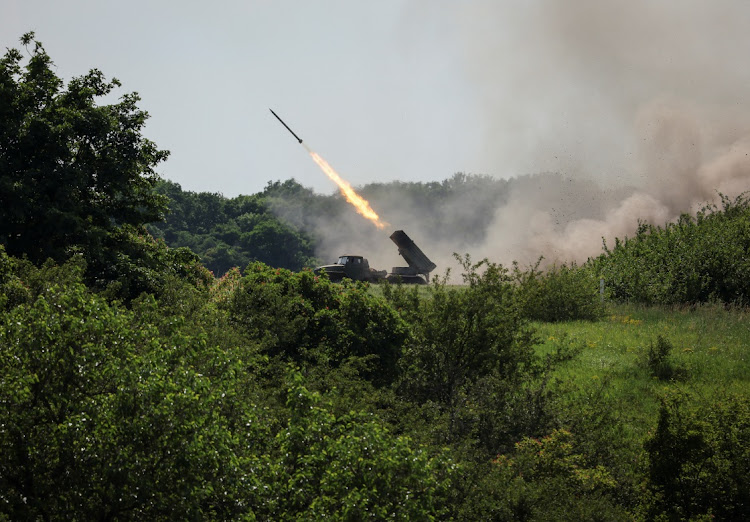 Addressing the Group of Seven summit in the Bavarian Alps via video link, Zelensky also asked for help to export grain from Ukraine and for more sanctions on Russia, a European official said.

As the leaders met, Russian forces were bombarding Lysychansk, the Kremlin’s immediate battlefield target after the fall of neighbouring Sievierodonetsk over the weekend.

Luhansk governor Serhiy Gaidai said the city was suffering “catastrophic” damage from the shelling and he urged civilians to urgently evacuate.

“The situation in the city is very difficult,” Gaidai wrote on the Telegram messaging app.

Before his address to G7 leaders meeting in the resort of Schloss Elmau, Zelensky had stressed the urgency of the need for more arms.

“Partners need to move faster if they are really partners, not observers. Delays with the weapons transfers to our state, any restrictions — this is actually an invitation for Russia to hit again and again,” he said in the latest of the daily messages with which he rallies his compatriots.

A senior US official said the G7 countries would commit to a new package of co-ordinated actions to raise pressure on Russia and will finalise plans for a price cap on Russian oil.

A European official said that as well as the air defence systems, Zelensky had asked for security guarantees in his address to the G7.

The leaders will make a long-term security commitment to provide Ukraine with financial, humanitarian, military and diplomatic support, for “as long as it takes”, including advanced weapons, the White House said.

The US is likely to announce this week the purchase of advanced medium to long range surface-to-air missile defence for Ukraine, a source familiar with the matter told Reuters.

President Joe Biden had earlier told allies “we have to stay together” against Russia in the face of its assault on Ukraine, now in its fifth month.

Sanctions have effectively cut Russia out of the global financial system but the war has created difficulties for countries way beyond Russia’s borders, with curtailed food and energy supplies hitting the global economy.

These also include Ukrainian grain exports, now trapped in ports, which normally feed millions of people across the Middle East, Africa and elsewhere.

But Russian President Vladimir Putin has shown no sign of changing course as his troops battled to pick off another Ukrainian city.

The General Staff of Ukraine’s Armed Forces said on Monday Russian forces were using artillery to try to cut off Lysychansk from the south. Russian war planes had also struck near the city, the general staff said in its daily update.

Tass news agency on Sunday quoted an official from Moscow-backed separatists as saying Russian forces had entered Lysychansk from five directions and were isolating Ukrainian defenders.

Reuters could not confirm the report and the general staff update made no mention of separatists entering the city.

“Lysychansk, it was a horror, the last week,” said Elena, an elderly woman from the city who was among dozens of evacuees who arrived in the Ukrainian-held town of Pokrovsk by bus from frontline areas.

“I already told my husband if I die, please bury me behind the house,” she said.

In a setback for Ukraine, Russian forces won full control of Sievierodonetsk, Lysychansk’s twin city on the eastern bank of the Siversky Donets River, over the weekend when Ukrainian troops pulled out after weeks of bombardments and street fighting.

The Donbas became a prime target for the Kremlin after Russian troops failed to take the capital Kyiv in the early stages of the war.

Russian forces also control a swathe of territory in the south, including the port city of Mariupol, which fell after weeks of siege warfare that left it in ruins.

Russian missiles also struck Kyiv for the first time in weeks on Sunday.

Russia invaded Ukraine on February 24 in what the Kremlin calls a “special military operation” to rid the country of far-right nationalists and ensure Russian security.

Kyiv and the West dismiss that as a baseless pretext for a war of aggression that has killed thousands, sent millions fleeing Ukraine, destroyed cities and driven up food and energy prices.

Western countries rallied around Kyiv when Russia invaded Ukraine in February, but that unity is now being tested as soaring inflation and energy shortages rebound on their own citizens.

At the summit, Biden emphasised the need for unity amid concern that there were diverging opinions in European capitals about how to handle the situation.

“Putin has been counting on it from the beginning that somehow the NATO and the G7 would splinter. But we haven’t and we’re not going to,” the US president said.