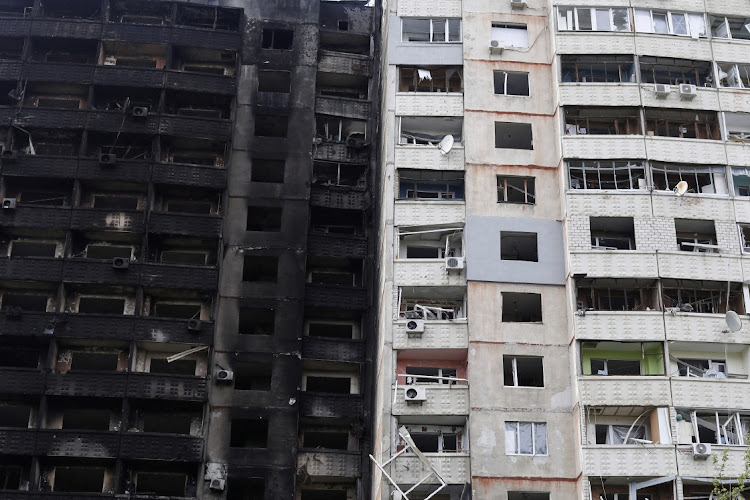 Damaged residential buildings are seen in Saltivka neighbourhood, amid Russia's attack on Ukraine, in Kharkiv, Ukraine, on May 10 2022. Picture: REUTERS/RICARDO MORAES

Kyiv —Ukrainian forces reported battlefield gains on Wednesday in a counterattack that could signal a shift in the momentum of the war, while Kyiv shut gas flows on a route through Russian-held territory, raising the spectre of an energy crisis in Europe.

In Vilhivka, a village east of Kharkiv held by Ukrainian forces, the thump of near constant artillery and swoosh of multiple rocket launchers could be heard from fighting at the front, now pushed substantially further east, where Ukraine has been trying to capture the banks of the Donets river and threaten Russian supply lines on the far side.

After days of advances, Ukrainian forces were within several kilometres of the Russian border in the Kharkiv region on Wednesday morning, a Ukrainian military source told Reuters.

East of Vilhivka, Ukrainian forces seemed to be in control of the village of Rubizhne, on the banks of the Donets, after what appear to the be the fastest advances since April when Ukraine pushed Russian forces back from Kyiv and the country’s north.

“It is burnt out, just like all Russian tanks,” a Ukrainian soldier told Reuters outside the village next to the ruins of a Russian tank. “The weapons are helping a lot, the anti-tank ones.”

President Volodymyr Zelensky’s office said Russian forces were “gradually being pushed out of Kharkiv”, though Kyiv has so far confirmed few details of the advance through the region, preferring to remain cautious.

Zelensky himself said the successes were putting the second largest city — under constant bombardment since the war’s early days — beyond the range of Russian artillery, but he cautioned Ukrainians against raising expectations too high yet.

“We should not create an atmosphere of excessive moral pressure, where victories are expected weekly and even daily,” he said in a video address.

The 92nd Mechanised Brigade said on Tuesday that it had recaptured four villages north of Kharkiv, pushing Russian forces closer to the border.

Ukrainian progress could be seen on the ground in Vilhivka, a severely damaged village recaptured by Ukrainian forces weeks ago but where few civilians had so far dared return.

With the Russians having now been pushed further east in recent days, more people were venturing back to comb through the wreckage of their homes.

Wednesday’s separate move by Ukraine to cut off Russian gas supplies through territory held by Russian-backed separatists was one of the first times gas shipments to Europe have been directly affected by the conflict.

Gas flows from Russia’s export monopoly Gazprom to Europe via Ukraine fell by a quarter after Kyiv said it was forced to halt all flows from the Sokhranovka transit point in southern Russia, because Russian-backed separatists were siphoning supplies.

Should the supply cutback persist, it would be the most direct impact so far on European energy markets of the war that the Kremlin calls a “special military operation”.

Apart from the east, Russia has seized a swathe of southern Ukraine, where Kyiv and its Western allies say they believe Moscow intends to organise a fake referendum on independence or annexation to make its occupation permanent.

The Kremlin said on Wednesday it was up to residents living in the Russian-occupied Kherson region to decide whether they wanted to join Russia, but any such decision must have a clear legal basis. Earlier, Tass news agency quoted an official in the Russian-controlled administration as saying the region planned to ask President Vladimir Putin to incorporate it into Russia.

Russian forces have also continued to bombard the Azovstal steelworks in the southern port of Mariupol.

The Azov Regiment holed up inside it said Russia was bombing the factory from the air and trying to storm it.

Europe must learn from past mistakes and make sure no side is humiliated when Russia and Ukraine negotiate for peace, French president says
World
2 weeks ago