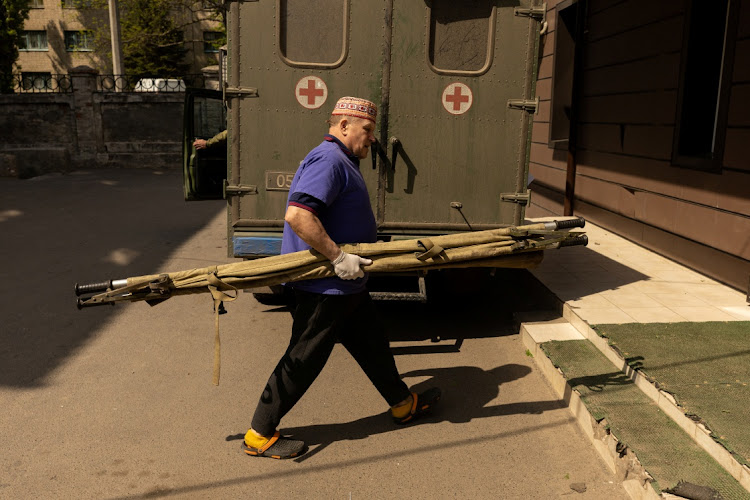 A nurse carries a stretcher past an ambulance that is carrying the body of a dead Ukrainian soldier, amid Russia’s invasion in Ukraine, outside the emergency room at a hospital in Bakhmut, Donetsk region, Ukraine, on May 5 2022. Picture: REUTERS/JORGE SILVA

Bakhmut — The hospital in the small Ukrainian town of Bakhmut was never intended to receive queues of ambulances bringing the wounded and traumatised from the front line of Europe’s biggest battlefield.

Nor did the volunteer paramedics expect, four months ago, to be shuttling back and forth to the front line of a brutal tank battle, within earshot of rockets and shelling.

“I haven’t seen so much human tragedy before. Absolutely unnecessary suffering,” said Elena Bulakhtina, a Russia-born Canadian medic who joined the Pirogov First Volunteer Mobile Hospital, a group of paramedics dedicated to providing medical care on the front line.

The hospital’s main job now is to “stabilise” the injured from the battle zone around the town of Popasna in the Luhansk region so that they can be moved on to bigger hospitals in western Ukraine, further from the main battle.

“Any Russian who can do something concrete to help Ukraine, not just sit on Facebook ... should do something,” she said.

Bulakhtina's Canadian passport means she can enter Ukraine — which she would be barred from doing as a Russian national.

Her boss, Svitlana Druzenko, said: “When the war had just begun, I wondered what casualties it would bring. And now I see that number of victims is just huge ... People are dying — and dying in all cities.” 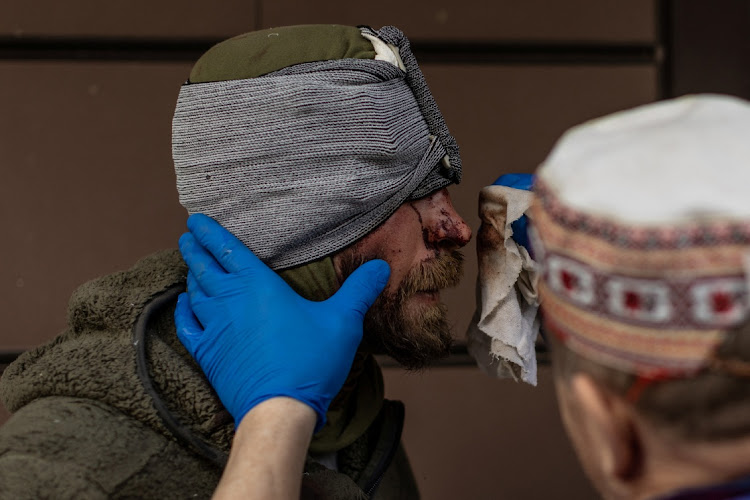 A nurse cleans blood from volunteer soldier Maksim, who was injured by shrapnel during combat in Popasna, amid Russia’s invasion in Ukraine, outside the emergency room at a hospital in Bakhmut, Donetsk region, Ukraine, on May 5 2022. Picture: REUTERS/JORGE SILVA

The sheer scale of a front line that runs for hundreds of kilometres has stretched Ukraine’s resources to the limit.

Some of the ambulances arriving at the hospital are second-hand German or Polish ones. A few metres from the emergency entrance, a wooden door used as a stretcher lies covered in dried blood.

“We’ve come from hell,” said Igor, an exhausted-looking, mud-covered soldier who joined the fighting a few days after the invasion started in February. He is among a group of soldiers diagnosed with shell-shock, or post-traumatic stress disorder, waiting at the hospital to be evacuated.

“They attacked us with everything — artillery, aeroplanes — there were shelling everywhere, day and night,” he said. “We were in the battle for almost six days. Popasna is completely destroyed.”

Russia sent tens of thousands of troops into Ukraine on February 24 in what it called “a special operation” to demilitarise and “denazify” its southern neighbour. Ukraine and its allies dismiss that as a baseless pretext for a war of conquest.

Alessandro, another member of the group of soldiers, takes advantage of the wait for a video chat with his granddaughter, who has managed to flee to Poland. “My family is safe there while we are going through this.”

One ambulance has to evacuate two combatants in a space that normally takes just one patient. One has a shrapnel injury to his spine. The doctors say his life is not at risk, but he may lose the use of his arms and legs.

About 70km northwest of Bakhmut, 20-year-old volunteer Aleksandra Pohranychna does not even have an ambulance.

She is the only paramedic serving her unit, and waits in the town of Sviatohirsk until soldiers take her to the front or bring the wounded to her.

Her father back in Lviv in western Ukraine gave her money to buy personal protection gear — but her mother has stopped talking to her.

It reads: “I have in my heart something that will never die.”

Europe must learn from past mistakes and make sure no side is humiliated when Russia and Ukraine negotiate for peace, French president says
World
1 week ago