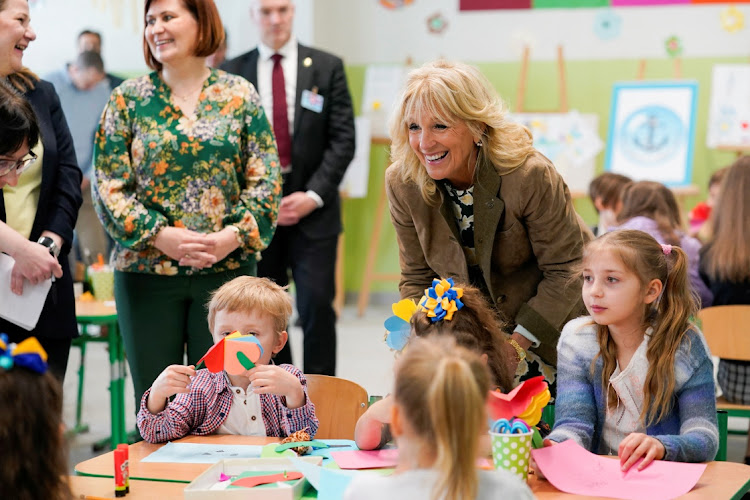 US First Lady Jill Biden meets Slovak and Ukrainian mothers and their children as the families participate in a Mother's Day activity in Kosice, Slovakia, May 8 2022. Picture: SUSAN WALSH/REUTERS

US first lady Jill Biden met Ukrainian refugees in eastern Slovakia on Sunday, the last full day of her tour of Romania and Slovakia to visit US servicemen deployed there and women and children who fled Russia’s invasion of Ukraine.

Biden spoke to families, volunteers and local authority workers at a refugee centre in the eastern Slovak city of Kosice, one of the main transit points for more than 400,000 Ukrainian refugees who have crossed the border to Slovakia.

“When the war started we understood that nowhere in Ukraine is safe,” Viktoria Kutocha, a teacher who fled the western city of Uzhhorod with her seven-year-old daughter, told Biden.

Biden, wife of US President Joe Biden, asked Kutocha how she explained the war to children. “It’s very difficult to explain. I only said there is a war and I cannot explain because I do not know myself,” said Kutocha.

“It’s senseless,” Biden responded, before embracing the mother and her child.

Biden, who teaches English and writing at a community college in Virginia, also visited a local school attended by refugee children.

“The hearts of the American people are with the mothers of Ukraine,” she said, wishing the women at the school a happy Mother’s Day.

One woman there said she felt children needed to have the war explained to them.

Most refugees who crossed into Slovakia have travelled onward to other countries, but more than 74,000 have received temporary protection status in the country of 5.5-million.

Later on Sunday, Biden made an unannounced trip to Ukraine, visiting a school that is serving as a temporary shelter and meeting Zelenska.

“I thought it was important to show the Ukrainian people that this war has to stop and this war has been brutal and that the people of the US stand with the people of Ukraine,” Biden said, according to a report by a Washington Post reporter shared with other media organisations.

The school is serving as a shelter for 163 displaced Ukrainians, including 47 children, the report said.

Biden gave flowers to Zelenska, who was making her first public appearance since the Russian invasion began on February 24, according to a US official. The two women hugged.

Zelenska said Biden was courageous for making the trip.

“We understand what it takes for the US first lady to come here during a war when the military actions are taking place every day, where the air sirens are happening every day, even today,” she said through an interpreter, according to the report.

Biden will leave the region on Monday after a four-day tour.

An oil ban leaves the world with less supply as the US and Europe face the fastest inflation in decades alongside wilting confidence because of the ...
News
2 weeks ago