Marches and violent clashes with police reported in Belgium, Austria and the Netherlands, where rioters pelted police with stones and fireworks 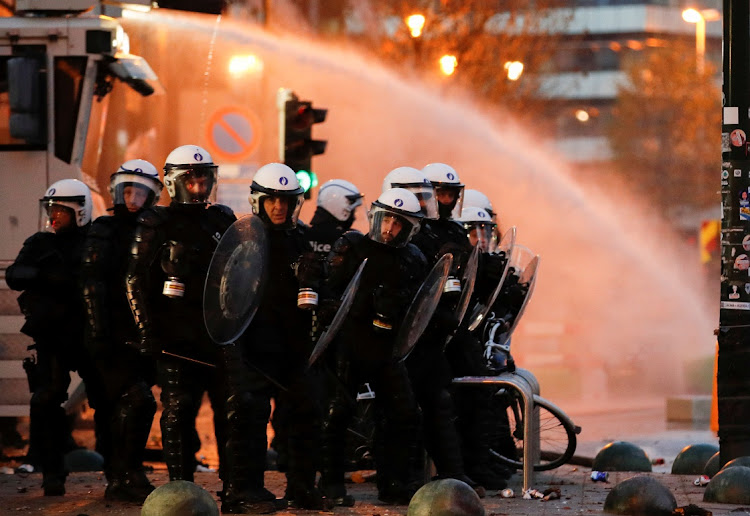 Brussels  — Protest against restrictions imposed by  governments in Europe in the fight against the Covid-19 pandemic spread to Brussels on Sunday, police said.

Unrest is on the rise in Europe, where governments are tightening restrictions amid a fourth wave and  increasingly targeting the unvaccinated. At the weekend, protesters took to the streets in Belgium, Austria and the Netherlands. Violence broke out in places, with protesters pelting police with stones and fireworks.

On Sunday,  about 35,000 people marched in Brussels. Confrontations between demonstrators and police saw protesters throwing smoke bombs and fireworks at police, the newspaper Le Soir reported.

Belgium had tightened its coronavirus restrictions on Wednesday, mandating wider use of masks and enforcing work from home, as cases rise in the country’s fourth Covid-19 wave. 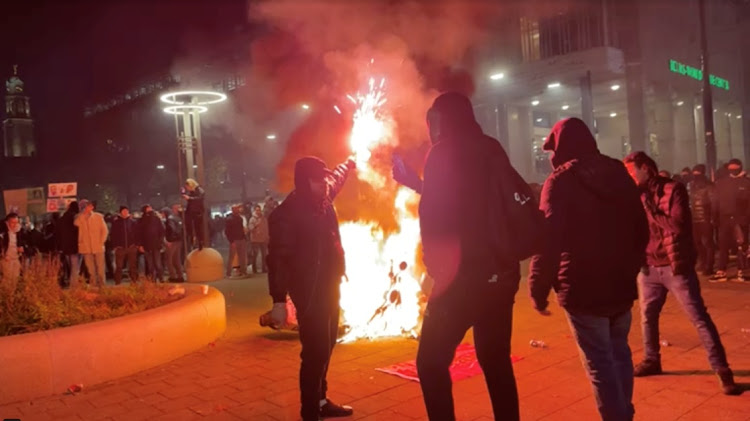 A man stands with a flare as protesters watch a motorcycle burning in Rotterdam, the Netherlands, November 20, 2021, in this screen grab obtained from a social media video. Picture: SVEN SIMCIC/REUTERS

In the Netherlands, five police officers were injured and at least 40 people detained across three provinces in protests that turned violent for a second night into Sunday.

Dutch authorities used water canon, dogs and mounted police to stop rioting youths who set fires and threw stones and fireworks in the worst disturbances since a full lockdown led to widespread disorder and more than 500 arrests in January.

Some of the most serious confrontations on Saturday night were in The Hague, where five officers were hurt, one of them seriously, a police statement said.

Several thousand protesters gathered in Vienna on Saturday after the Austrian government announced a vaccine mandate and a national lockdown to contain record coronavirus cases. Protesters, mostly unmasked, shouted and sang while waving flags and home-made signs. The far-right Freedom Party, which opposes vaccine directives, spearheaded the action to protest at  Austria’s moves.

German politicians were  debating making vaccinations compulsory for citizens in light of soaring infections and falling inoculation rates. Several members of Chancellor Angela Merkel’s conservative bloc said on Sunday that federal and state governments should introduce compulsory vaccinations soon as other efforts to push up Germany’s inoculation rate of 68% have failed.

Elsewhere, France deployed special police forces to its overseas territory of Guadeloupe after a third night of looting and rioting amid protests against Covid-19 measures. Gunmen had opened fire on police and firefighters, authorities said on Sunday. With Staff Writer

Europe’s largest economy is grappling with its worst outbreak, posting a record in its contagion rate on Tuesday
News
3 weeks ago
Next Article