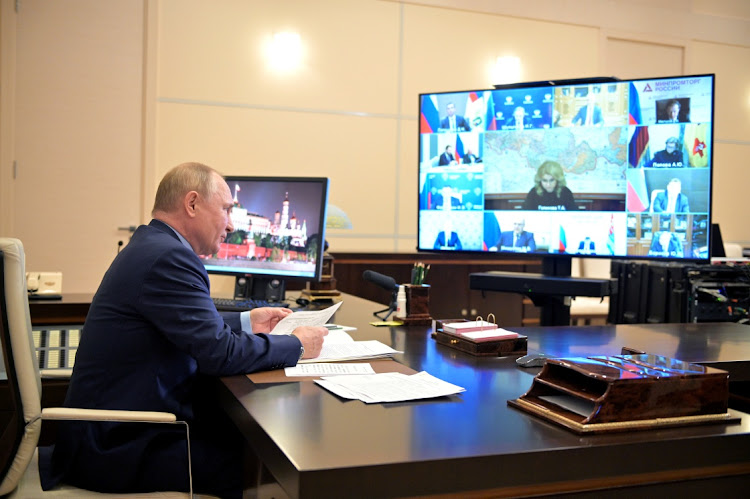 The Kremlin’s new stay-at-home order to curb surging cases of Covid-19 has raised questions about whether the Bank of Russia will deliver a big interest-rate increase at its meeting Friday.

“There is a new uncertainty with those non-working days,”  said Oleg Vyugin, a former senior central bank official. “I used to think they will raise by 50 basis points, but now, with the new circumstances, I began to have doubts. It could be 25 basis points as well.”

President Vladimir Putin on Wednesday approved a government plan to declare October 30 to November 7  as “nonworking days” nationally —  with some hard-hit regions starting a week earlier — as new cases and deaths reach records. The restrictions would be the most sweeping since at least May and could be extended further.

Putin also warned that the surging price of gas in Europe could lead to higher costs for farm products in Russia and called on the government to take steps to mitigate those effects.

With inflation running nearly double the central bank’s 4% target, many economists had expected a larger hike at Friday’s meeting. But governor Elvira Nabiullina has also said the economic recovery is already slowing down after the 250 basis points in increases the bank has already delivered in 2021. In a break with recent tradition, the central bank hasn’t given a clear signal to the market of the options it will consider.

“The central bank has to navigate between Scylla and Charybdis,” said Natalia Orlova, chief economist at Alfa-Bank in Moscow. “The purely economic arguments are more for 25 basis points.”

Economists now narrowly favour a 25 basis-point increase, with 22 forecasting that compared to 19 predicting a half-point rise and one expecting a hike of 75 basis points, according to a Bloomberg survey.

“New restrictions to contain the virus could weigh on demand but also stoke price pressure, whether through consumer stockpiling or disruption to supply. Fresh uncertainty could make the central bank more cautious, favouring a smaller rate hike than the half-point in our forecast,” said Bloomberg Economics analyst Scott Johnson.

Sova Capital economist Artem Zaigrin said: “A hard lockdown on a countrywide level ... is a significant risk that could have a meaningful impact on business activity and slow the central bank’s rate-hiking cycle.”

Arrest of Ilya Sachkov, accused of working with foreign intelligence services, sends chill through IT and business community
World
2 months ago
Next Article