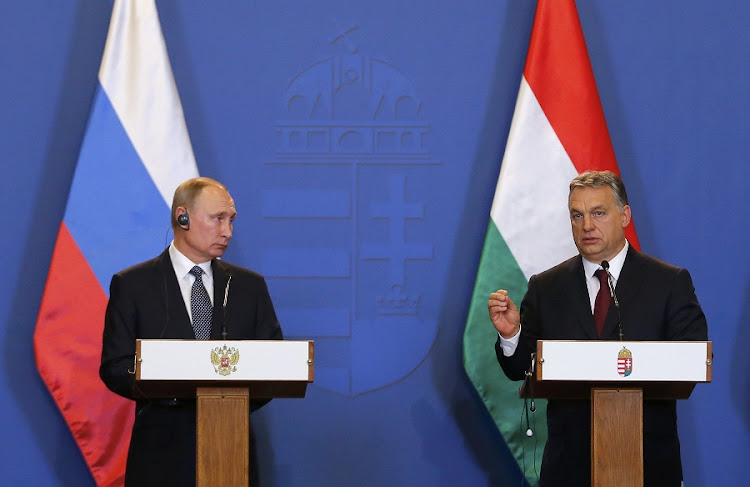 Europe is in a full-blown energy crisis, but two people seem to be enjoying it: Russian President Vladimir Putin and Hungarian Prime Minister Viktor Orban. They’d love to seize this opportunity of chaos and anxiety to foist their own designs on the EU on the sly. The EU must see through these ploys and resist.

The crisis has many causes, which makes it confusing and thus attractive to demagogues bent on spreading FUD — fear, uncertainty and doubt. For months, there’s been speculation that one factor behind higher gas prices may be the KGB-trained Putin’s tactic of piping less Russian gas than usual to Western Europe — though still enough to satisfy existing contracts — and thereby leaving stockpiles abnormally low as winter approaches.

Why might Putin want to do that? Nord Stream 2 is the obvious answer. It’s a pipeline backed by Russia’s state-owned gas monopoly, Gazprom, that connects Russia directly to Germany under the Baltic Sea. The link has been completed but isn’t in operation yet, because the EU has yet to give the necessary permits. It’s also been delayed by geopolitical concerns: the US, Poland, Ukraine and many other countries see it as a Russian strategy of circumventing Eastern Europe, perhaps with the intention of shutting off the gas flowing through existing pipelines there.

Lo, what a surprise when Putin this week suggested, ever so spontaneously and magnanimously, that Russia might help ease the EU’s energy problems. His minions helpfully added that the way to do that would be for the EU to give the green light right now to pumping gas through Nord Stream 2.

Orban is coming at the energy crisis from a different angle. He’s long been the EU’s internal bête noir, using Brussels as a bogeyman for his populist, nativist and illiberal propaganda at home. He’s also been obstructing the EU’s major policy efforts, including its so-called Green Deal, which is meant to make the EU carbon-neutral by 2050.

The Green Deal’s central policy instrument is the EU’s Emissions Trading System, which caps the carbon that various industrial sectors are allowed to emit and then lets companies buy or sell their permits. To reach the goal of carbon-neutrality, this system must be expanded to cover the whole economy, and the cap must decrease, pushing the carbon price ever higher.

Orban doesn’t like that, so this week he linked that European carbon price to the current energy crunch, in effect blaming Brussels for manufacturing the crisis. Let’s just scrap the Green Deal, he implied. He got immediate pushback, but he also knows that several other member states are open to his message.

Europe would make a disastrous mistake by indulging either Putin or Orban in their cynical games. The EU’s regulators are right to be concerned about Nord Stream 2, because it aims to confer on Gazprom (and thus Moscow) precisely the sort of market power that European laws are meant to prevent. Moreover, the geopolitical fears about Putin using the pipeline to blackmail Eastern Europe are real.

As for the Green Deal and its carbon price, it is the continent’s, and arguably the world’s, best shot at fighting climate change. It must be strengthened and accelerated, not curtailed or slowed, in the hope that other countries emulate it in due course. And yes, that means high and sometimes volatile energy prices will be with us for the foreseeable future.

My advice, admittedly, is of little help to Europe’s leaders as they grope for an appropriate response to the present crisis. Higher costs of heating, electricity and petrol will hit poor Europeans hardest. If nothing is done, the whole continent could face winter sequels to the “yellow-vest” protests that roiled France in 2018, when citizens rioted against higher fuel prices.

If necessary, let the EU’s governments give people cash to supplement their budgets — like the stimulus cheques some countries handed out during the pandemic. This could even become a permanent mechanism, as proponents of a universal basic income have long imagined it.

But the EU must avoid doing things that are rash and wrong just for the sake of doing something. Neither Putin nor Orban has Europe’s best interests at heart. An energy crisis is bad enough. No need to compound it with others.

Perversely, because of the big push towards green energy and away from dirty coal, existing coal assets have become that much more valuable
Opinion
10 months ago