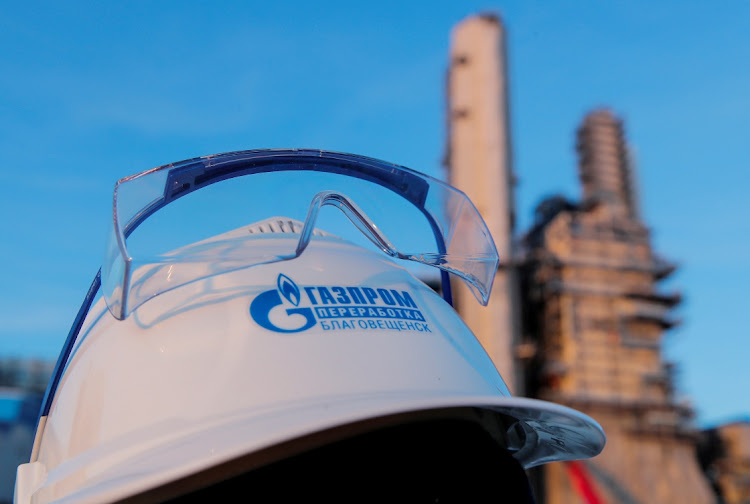 A worker in a branded helmet at the construction site of the Amur gas processing plant, part of Gazprom's Power of Siberia project. File photo: REUTERS/MAXIM SHEMETOV

Europe’s worst energy crisis in decades could drag deep into the cold months as Russia is unlikely to increase shipments until November at the earliest.

Gazprom is producing the most gas in more than a decade for this time of year, but the additional output is staying at home. Russia needs to replenish its storage sites that were severely depleted after a severe winter and has embarked on a stockpiling campaign due to continue through October. Only then will it be able to flow more to Europe, according to Czech investment bank WOOD & Co.

The constraints at home come as top customer Europe is facing a gas crunch, with prices breaking records. That’s prompted the International Energy Agency to call on Russia to do more to boost shipments, while a group of European lawmakers asked for an investigation into Gazprom’s role in the price rally. The US said the crisis raises concerns about market manipulation.

“The focus on the domestic market is strong,” with Gazprom keen to avoid destabilising Russian supply despite the prospect of record profits abroad, said Ildar Davletshin, an analyst at WOOD. “Gazprom does not have much additional spare capacity to raise production straight away.”

The limited Russian supply is starving Europe of the fuel it needs to fill its own inventories before winter. With the heating season starting in just a few weeks, consumers could get no relief from sky-high prices as intense competition with Asia for liquefied natural gas cargoes compounds the crisis.

Gazprom’s storage sites in Russia were just 16% full at the end of last winter, depleted well beyond the normal 35% to 40%, according to Bloomberg calculations using company data. The gas giant plans to finish filling its Russian storage sites by November 1, and “after this point, any excess volumes could be available for the European market,” Citigroup said in a note.

The producer said last week that it was putting 325-million m³ of gas a day into Russian inventories, almost the same volume as it sends daily to Western Europe. High domestic demand during a bitter winter left storage sites depleted, while summer heatwaves boosted gas use for power stations and several other major Russian producers curtailed supply.

“They have to fill up their own storage,” Didier Holleaux, deputy CEO of French customer Engie, said this week. He declined to comment on whether Engie had asked Gazprom for extra volumes.

The Russian company plans to pump more than 510-billion m³ of gas this year, and sees exports to Europe — including Turkey — at about 183-billion m³,  though analysts have suggested actual flows may be higher.

Gazprom also has to meet demand from customers other than Europe, with shipments to Turkey more than doubling this year. The company also sends gas to Asia from fields in East Siberia that can’t be used to supply Europe as they’re not linked up to the company’s westbound pipeline system.

Russia’s piped supplies to China in the first half tripled from a year earlier and the growth is set to continue, with Gazprom targeting flows of as much as 38-billion m³ a year to Asian consumers via pipeline.

Gazprom does have spare capacity to cover spikes in demand such as during severe cold snaps — almost 150-billion m³ on an annualised basis, CEO Alexey Miller said last week. Each year, that buffer is needed “for three or five or 10, maybe 12 days,” he said. It’s not necessarily available at all times or for a prolonged period.

The press service of Gazprom declined to comment on near-term output plans and on whether it’s possible to hit winter production levels sooner. The company’s size may make that difficult — with a likely time lag between a top-level decision on output or exports and its actual implementation, according to WOOD’s Davletshin.

Gazprom has said it’s meeting all contractual obligations abroad and aims to satisfy additional demand “whenever possible”. But a group of European lawmakers have called on the European Commission to probe the company’s role in the market’s blistering rally, saying they suspect it’s withholding some fuel to pressure the EU into accelerating approvals for Russia’s new Nord Stream 2 pipeline.

The IEA also said this week that Russia “could do more to increase gas availability to Europe”, while US Energy Secretary Jennifer Granholm said Europe and America had to be prepared to “stand up” when there are energy-producing nations who may be “manipulating supply to benefit themselves”.

Any potential relief from soaring prices in November will depend not only on Russia, but on winter temperatures in Europe and supplies from other producers such as Norway, whose hefty field-maintenance season is nearing an end. The availability of LNG cargoes will also be a factor.

Gazprom “cannot wave a magic wand and deliver extra gas to any place in Europe that requires it on short notice”, said Vitaly Yermakov, a senior research fellow at the Oxford Institute for Energy Studies. “No matter how hard Gazprom tries, it cannot single-handedly balance such a huge market as Europe.”

This is just one of the stages in the approval process, with environmental authorisation and other permits still required
National
10 months ago