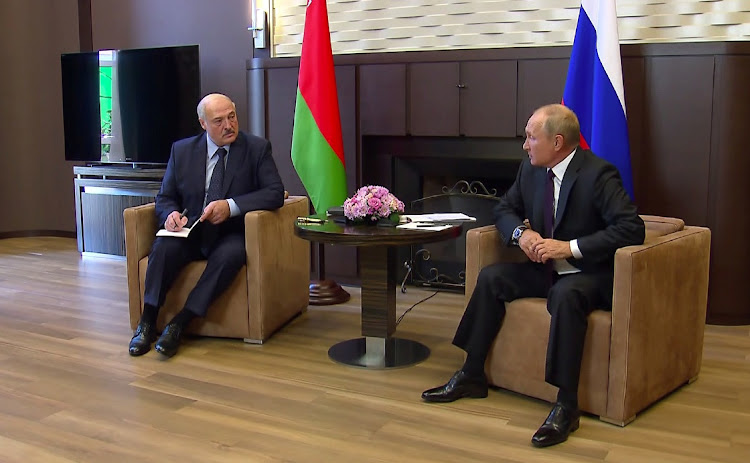 Ahead of a landmark summit with US President Joe Biden, Vladimir Putin is putting down a marker in Belarus over the limits of Western encroachment on Russia.

Putin was hosting Belarusian President Alexander Lukashenko for talks on Friday in Russia’s Sochi, a public embrace of an ally who’s accused by the EU of state-sponsored piracy over the forced landing of a Ryanair jet and arrest of a dissident journalist.

As the EU weighs escalating sanctions on Lukashenko’s regime and points the finger at Russia for its support of the former Soviet collective farm boss, the Kremlin sees an opportunity to bind Belarus even more tightly into its orbit.

“There is a growing assumption in both Europe and the US that what happened could not have been done by Belarus alone, that Russia had some role to play,” said Oksana Antonenko, a director at Control Risks consultancy in London. “This may overshadow the cautiously positive attitude we’ve seen recently coming out of both Washington and Moscow.”

The standoff is playing out ahead of Putin’s first presidential summit with Biden in Geneva on June 16, when they are expected to discuss tensions over the conflict in Ukraine, strategic armaments and cyber attacks. Russia accuses the West of seeking to undermine its security by inciting a pro-democracy “colour” revolution in Belarus that expands the influence of the EU and the North Atlantic Treaty Organization, emulating upheavals in Georgia and Ukraine.

Putin backed Lukashenko’s brutal crackdown on protests against last year’s disputed presidential elections that triggered EU, UK and US sanctions on Belarus. Russia also agreed to provide $1.5bn in loans and struck deals on oil and gas supplies for this year.

Still, the Kremlin has been trying to reduce the financial burden of keeping afloat Belarus’s inefficient state-dominated economy. Energy subsidies that reached 19% of Belarusian GDP in 2006 plunged to less than 1% of GDP in 2020.

While Russia is the single biggest investor in Belarus and its largest trading partner, Lukashenko has resisted pressure from Moscow in recent years for deeper political integration under a “Union State” agreement.

“There are efforts of the Russian government to swallow Belarus as an independent state,” Lithuanian President Gitanas Nauseda told Bloomberg TV Friday. “They’re quite successful at doing this.”

In power since 1994, Lukashenko has been adept in the past at playing off the EU and Russia against each other to retain his independence.

But his May 23 intervention against the Ryanair flight from Greece to Lithuania has infuriated the EU and leaves him little room to manoeuvre after Belarusian security services took journalist Raman Protasevich and his Russian girlfriend off the jet and into detention. They face up to 15 years in prison on accusations of inciting mass unrest.

It’s “hard to believe” Belarus would have acted this way “without any kind of co-ordination with Russia,” Nato secretary-general Jens Stoltenberg told Sky News Friday on board a new British aircraft carrier during the military alliance’s biggest exercises this year.

German foreign minister Heiko Maas said on Thursday the EU was ready for “an extensive and lengthy spiral of sanctions,” after it banned the Belarusian state airline from its airspace and urged European carriers to avoid flying over Belarus.

One target may be the Belarusian potash industry, a key source of foreign currency.

Belarus is counting on Russia’s support in the face of increasing western pressure, Prime Minister Roman Golovchenko told his Russian counterpart Mikhail Mishustin at talks in Minsk on Thursday.

The EU approved a €3bn support package Thursday for Belarus “once a democratic transition takes place,” European Commission President Ursula von der Leyen said in a letter to exiled opposition leader Sviatlana Tsikhanouskaya and her allies. “We continue to stand ready to engage in all possible ways to accompany a peaceful democratic transition in Belarus.”

“Lukashenko’s ability to play Russia off against other countries has now been cut to the bone,” which is positive for Moscow, said Andrey Kortunov, head of the Kremlin-founded Russian International Affairs Council. “But he will come more often to Russia to ask for money.”

Sanctions on Belarus “will have some impact” on Russia too because of links between companies in the two countries, said Ryhor Astapenia, director of the Belarus Initiative at Chatham House, a London-based think-tank.

Putin is stuck with Lukashenko because “the Kremlin has no reliable alternatives,” according to Artyom Shraibman, Minsk-based nonresident scholar at Moscow Carnegie Center.

“Russia might be interested to see Lukashenko gradually give up his power,” Shraibman said. “But it’s not obvious what it can do to help this happen.”

At least, whoever ordered this outrage did not have the aircraft blown up in mid-flight
News & Fox
2 weeks ago