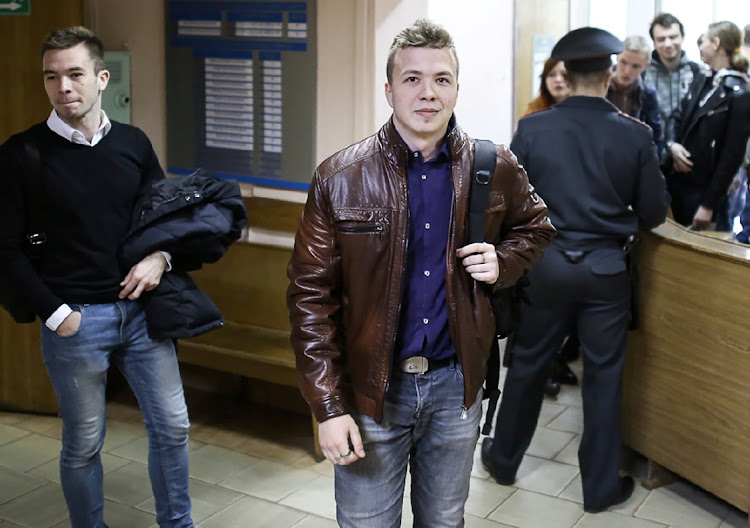 Moscow  — Belarusian President Alexander Lukashenko ordered a Ryanair flight carrying a key opposition blogger and headed for Lithuania to land in the Belarusian capital Minsk on Sunday and detained him on arrival, officials and rights activists said.

Law enforcers detained activist Roman Protasevich, put on a wanted list after 2020’s mass street protests after an election in which Lukashenko had claimed a landslide victory.

Protasevich is one of the founders of the opposition news service Nexta, a Telegram channel that has become one of the main sources of news about demonstrations in Belarus. It is hostile to Lukashenko and helps to co-ordinate protests.

The aircraft, flying over Belarus from Athens to Vilnius, had almost reached Lithuania when it changed direction and was escorted to Minsk amid reports that it had explosives on board, according to an online flight tracker and BelTA.

No explosives were found, BelTA said.

The Belarus department for organised crime control also reported that Protasevich had been detained but then deleted the statement from its Telegram channel.

Ryanair said in a statement nothing untoward had been found on the flight  and security checks were completed by local authorities on the passengers. The Lithuanian ministry of foreign affairs had no immediate comment.

Poland's prime minister called it state terrorism. “I condemn in the strongest terms the detention of Roman Protasevich by Belarusian authorities, after a Ryanair passenger aircraft was hijacked. This is a reprehensible act of state terrorism,” Prime Minister Mateusz Morawiecki said on Twitter.

In power since 1994, Lukashenko launched a violent crackdown on the 2020 street protests. About 35,000 people have been detained since August, human rights groups say. Dozens have received jail terms. Authorities say that more than 1,000 criminal cases have been opened.

A Lithuanian airport authority spokesperson told Reuters the plane, scheduled to land in Vilnius, was diverted to Minsk due to a conflict between the crew and a passenger.

Belarusian opposition politician Svetlana Tikhanouskaya, Lukashenko’s main rival at the past election, said Belarus authorities “placed at risk safety of passengers on board and all of the civil aviation for the sake of punishment of the man who was an editor of Belarus’s largest independent Telegram channel”.

The complex dynamics of the region, including Ukraine wanting to be part of Nato, mean a prolonged confrontation is likely
World
5 months ago

Response to foreign interference will be asymmetric, quick and harsh, says president
World
5 months ago

2020 was a bad year for freedom; let’s make the liberal case for a better future

The main culprits are conspiracy theorists, who always thrive in times of plague and abuse free speech to spread disinformation and lies
Opinion
8 months ago