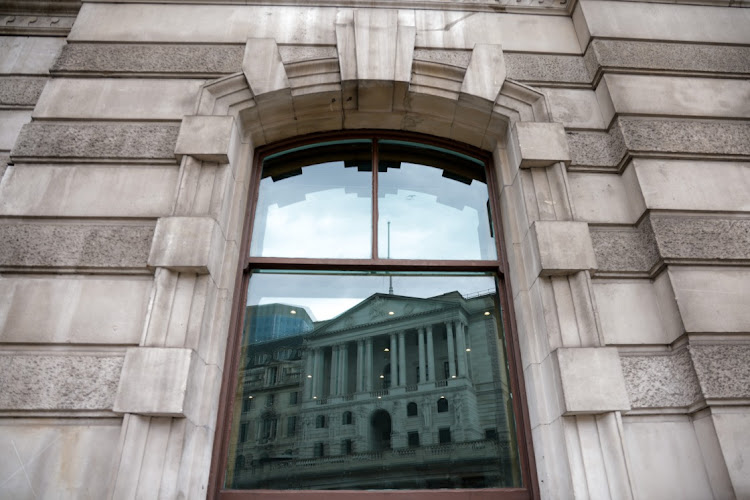 The Bank of England reflected in a window in London, Britain, May 6 2021. Picture: JASON ALDEN/BLOOMBERG

London  — The Bank of England (BOE) said on Thursday Britain's economy would grow by the most since World War 2 in 2021 and slowed the pace of its bond-purchasing programme, but stressed it was not reversing its stimulus.

Governor Andrew Bailey welcomed the prospect of a stronger recovery than previously forecast as the country races ahead with its coronavirus vaccinations, with much lower unemployment.

But he also said there was still a big gap compared with how big the economy would have been without the pandemic.

“Let's not get carried away,” Bailey said about the improved outlook. “It takes us back by the end of this year to the level of output that we had essentially at the end of 2019 pre-Covid.”

That would be the fastest annual growth since 1941 when Britain was rearming. But it comes after output plunged by 9.8% in 2020, the biggest drop in more than 300 years.

As well as the vaccines, the growth upgrade reflected a smaller-than-feared hit from a third coronavirus lockdown which began in January and the extension of higher public spending and tax cuts announced by finance minister Rishi Sunak in March.

The economy was set to return to its pre-pandemic size in the last quarter of 2021, three months earlier than previously thought, the BoE said.

With the economy on course for recovery, the BoE said it would reduce the amount of bonds it buys each week to £3.4bn, down from £4.4bn now.

“This operational decision should not be interpreted as a change in the stance of monetary policy,” it said.

So far most central banks in rich countries have stressed they are in no hurry to scale back their huge economic support.

But the Bank of Canada said in April it could start to raise rates by late 2022 and pared back its bond-buying.

“While the Bank of England is clearly more positive about the UK economy in the near-term, the monetary policy committee also has significant uncertainties about the longer-term outlook and are seemingly in no hurry to tighten monetary policy,” Howard Archer, an economist with forecasters EY Item Club, said.

The central bank kept its benchmark interest rate at an all-time low of 0.1% and the total size of its bond-buying programme unchanged at £895bn, as expected by economists polled by Reuters.

BoE chief economist Andy Haldane, who has warned of inflation risks, cast a lone vote to cut the bond-buying scheme by £50bn. Haldane is due to leave the bank in June.

Sterling was little changed against the US dollar and the euro.

The BoE said it now expected unemployment to rise only slightly to a peak of 5.4% in the third quarter of 2021, when Sunak's jobs protection programme is due to expire.

Due to this, and an expected short-term boost to investment from government tax incentives, the central bank lowered its estimate of long-term economic scarring to 1.25% from 1.75%.

The BoE said inflation was likely to slightly overshoot its 2% target later this year due to temporary factors mostly related to energy prices.

But it is keeping a closer eye on whether there could be longer-term supply bottlenecks after the pandemic and Brexit.

The BoE saw inflation fractionally below its 2% target in two and three years' time, based on expectations in financial markets for Bank Rate of 0.3% in two years' time and 0.6% by the second quarter of 2024.

Bailey said the BoE was not sending a signal about the likely path of interest rates.

Purpose-led, nimble regulations are required over process-heavy, rules-based ones
Opinion
3 months ago

The Bank of England says HSBC, Barclays and other major lenders have sufficient capital to absorb losses in the coming months
World
6 months ago
Next Article

UK’s tardiness in booting up robotics sector could bring pain

UK’s tardiness in booting up robotics sector could bring pain