For France’s huge wine industry, tasters and vintners losing their senses of smell and taste has them petitioning for early vaccines 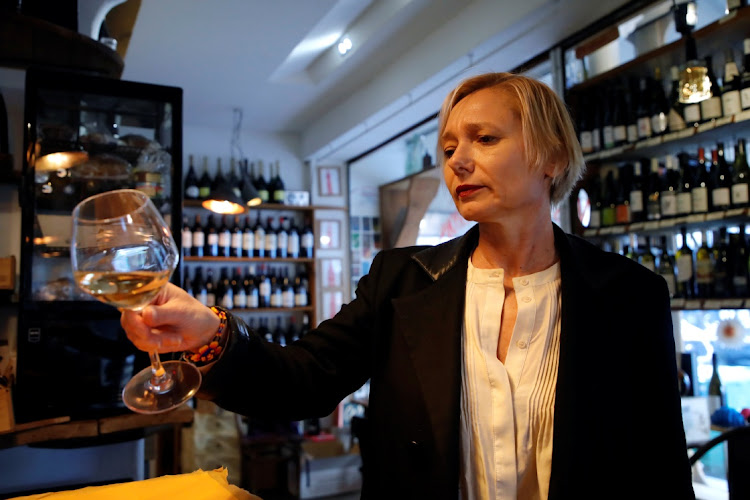 French oenologist Sophie Pallas, who lost her senses of taste and smell after been infected with Covid-19 in a shop in Paris, France, April 19 2021. Picture: REUTERS/SARAH MEYSSONNIER

Paris — The exotic fruits and fresh citrus notes leapt out of the Pyrenean white wine, but wine-taster Sophie Pallas said the delicate undertones of pineapple were harder to detect than they would have been before she fell ill with Covid-19.

Like so many infected with the coronavirus, Pallas lost her sense of taste and smell, a nightmare scenario for a master wine taster that has forced her to slowly retrain her nose and palate.

Pallas’s story highlights the pandemic’s risk not just for vintners, sommeliers and wine tasters in France’s multi-billion-euro wine industry but also for chefs, parfumiers, chocolate makers and others for whom finely tuned tastebuds or noses are vital tools of the trade.

“It was like being in a black hole. It was a terrifying feeling, a total loss of my bearings,” Pallas recalled of being deprived of her senses. Wine, she said, “stopped generating any feeling, any emotion, any pleasure, because all I could detect was the alcohol and the acidity.”

France’s wine industry is worried. Oenologists such as Pallas are experts with training in science who advise winemakers through the distillation, blending and bottling phases of production.

A survey of more than 2,600 industry professionals by the International Union of Oenologists showed that among those who had caught Covid-19 more than a third said the disease had affected their ability to do their work. Some student wine tasters had dropped out of courses after falling ill with the virus, the union said.

Union boss Didier Fages said the body had written to President Emmanuel Macron and prime minister Jean Castex to ask that wine tasters be moved to the front of the queue for vaccine shots to safeguard livelihoods.

Asked what it meant for a wine taster to be robbed of their sense of taste or smell, Fages responded: “It’s like asking a musician to play without his instrument.”

As she recovered, Pallas would raid her kitchen morning and evening and deeply inhale the scent of spices, vanilla pods, coffee beans — whatever she could lay her hands on — to retrain her nose. While she now easily identifies the dominant flavours in a wine, Pallas said she still struggles with the more subtle, complex notes.

It is a process of re-education that is all too familiar to champagne-maker Charles Philipponnat, who doctors put into an induced coma for a week as Covid-19 ravaged his body in October and who awoke to find he had partially lost his senses.

As he convalesced during the autumn, the 58-year-old whose finest vintages can sell for some €600 a bottle found the aromas of dark fruits and berries were simple to detect, but not those of mandarins and ripe citrus fruits.

Early spring marked the start of the assemblage, the delicate blending of fermented and reserve wines to create the base for a champagne-maker’s next cuvée. Philipponnat guessed that he had recovered 90% of his capacity to taste and smell, saying, “It will have taken me six months to rediscover my reflexes.”

MICHAEL FRIDJHON: Nonalcoholic wine is hardly worth the squeeze

MICHAEL FRIDJHON: Wine blends thrive on the respect they are given

MICHAEL FRIDJHON: Pandemic-induced crisis in Cape wine industry has been years in the making

Loss of more than 2,000 growers and full extent of uncontracted stock cannot be blamed fully on the lockdowns
Opinion
10 months ago

Vinpro wants to guard against the industry being turned ‘on and off’ by the government, MD Rico Basson says
National
11 months ago
Next Article