There is mistrust of shots made in China and Russia compared to the West, with mandatory vaccination starting to be talked about 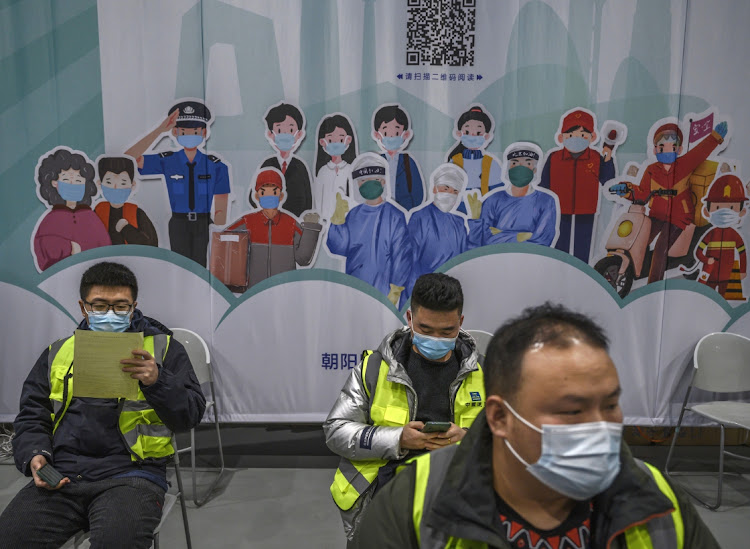 Chinese workers sit in an observation area after receiving a Covid-19 vaccine shot at a mass vaccination centre for Chaoyang District on January 15 2021 in Beijing, China. Picture: GETTY IMAGES/KEVIN FRAYER

London — People across the world are generally likely to say yes to getting a Covid-19 vaccine, but would be more distrustful of shots made in China or Russia than those developed in Germany or the US, an international poll showed on Friday.

The survey, conducted by the polling company YouGov and shared exclusively with Reuters, found Britons and Danes were the most willing to take the Covid-19 vaccine when it becomes available to them, while the French and Poles were more likely to be hesitant.

The poll was based on questions put to almost 19,000 people.

It also found that willingness to take the Covid-19 vaccine has been improving in many countries in recent weeks, just as shots developed by companies in the US, Russia, China, Germany and Britain were starting to be delivered and administered in countries across Europe, North America and Asia.

In Britain, 73% of people said they would get vaccinated, while in Denmark the number was 70%.

In the US, however, just less than half of those surveyed said they would be willing to get a Covid-19 vaccine, a figure that has remained broadly stable since July.

More than a third of people surveyed in Poland and almost half in France — 37% and 48%, respectively — said they would say no to a Covid-19 shot if offered.

Confidence among populations about vaccines will be a key factor in governments’ efforts to curb the rate of infections in the year-long SARS-CoV-2 coronavirus pandemic, which has infected more than 92-million people worldwide and killed at least 1.98-million.

A study published by vaccine confidence researchers in November found that conspiracy theories and misinformation fuels mistrust and could push Covid-19 shot uptake rates below levels needed to protect communities against the disease.

Friday’s YouGov poll found that, while sizeable minorities in many countries said they would not take the Covid-19 vaccine now, most gave their reason as preferring to wait and see if the vaccines were safe, and few were driven by entrenched “anti-vaxxer” views.

In France, for example, the proportion of the population saying they’d refuse the vaccine because they were “opposed to vaccines in general” was highest at 9%, but still far lower than the percentage who would reject a Covid-19 vaccine specifically.

With Covid-19 vaccine production and delivery beginning to ramp up, the YouGov poll also surveyed attitudes to compulsory Covid-19 vaccination — a policy under discussion by some governments to try to get as many people as possible immunised.

Such a move was most popular in India at 77%, Indonesia at 71% and Mexico at 65%. Britons were split, with 40% supportive and 42% opposed; Americans tended to oppose the idea, at 46%, compared with only 29% who would back mandatory vaccinations.

A global survey shows trust in traditional media is higher than social media, and that people expect business to step in when governments fail them
World
6 months ago

Along with mRNA vaccines, driverless and electric vehicles also had a year of great advances
Opinion
6 months ago
Next Article