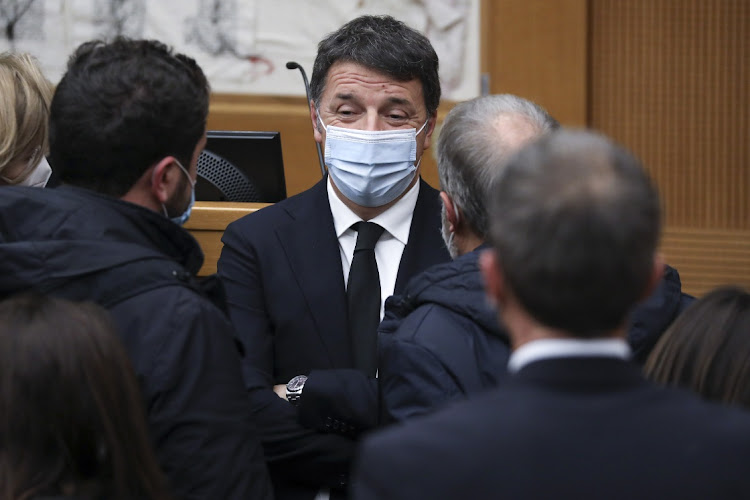 Rome — Italy’s government led by Prime Minister Giuseppe Conte risks collapsing in the middle of the Covid-19 pandemic after a junior coalition partner pulled out on Wednesday.

Former premier Matteo Renzi said his Italy Viva party is quitting the coalition after attacking Conte for failing to do enough to tackle the country’s problems. Though the party is tiny, Conte relies on it to maintain his majority in parliament.

Renzi’s decision sparks a government crisis which could last days or even weeks, and has no clear solution in sight.

After accepting the ministers’ resignation, Conte could step down himself. That would likely trigger a new round of talks among parties and lead to another Conte government, a new premier or a technocratic administration. Snap elections, though a risk, appear unlikely for now.

Pulling out at a such a crucial moment for the country amounts to “an act of courage”, Renzi said at a news conference in Rome. Conte’s government has not done enough to resolve problems from education to infrastructure, as well as the Covid-19 pandemic, the former premier said.

“We are not playing,” Renzi said, addressing critics who’ve accused his party of political posturing during weeks of build-up to the current crisis. “Democracy is not a reality show.”

Investors have reacted to the heightened uncertainty. German bund futures rose after the announcement, while Italy Treasury bond futures fell. The cost of borrowing for the Italian government has risen modestly in recent days on concerns of political instability.

The timing of the crisis for Conte could hardly be worse, with Italy battling a worsening pandemic and a recession. A cabinet meeting late on Wednesday was due to discuss new Covid-19-related restrictions, while on Thursday Conte is set to sign off on a plan to widen the country’s deficit by about €24bn.

Renzi said that his party is still willing to back plans for more deficit spending and any measures necessary to tackle the pandemic. He did not rule out a new government led by Conte but said Italy Alive won’t support any coalition including Matteo Salvini’s League, an anti-migrant, anti-EU opposition party.

If Conte opts to resign, he could be given a mandate by Mattarella to try to forge a new alliance.

Alternatively, the premier could seek a parliamentary vote of confidence. But if he fails to win over enough centrist and unaffiliated legislators to replace Renzi’s Italy Alive, the government would become a caretaker administration with limited powers.

The existing coalition parties — including Italy Viva — could also try to revive their alliance under a different premier, such as former European Central Bank president Mario Draghi. They will probably explore a range of options to avoid a new election, as surveys show the Salvini-led centre-right would likely win if the country is forced into a snap vote.

“The impact of Renzi’s move on Italy’s fragile economy will depend on what will happen next,” said Lorenzo Pregliasco, a political analyst at YouTrend. “A snap vote, the worst scenario for investors, remains unlikely at this stage.”

Renzi had been dialling up the pressure on Conte since late 2020, slamming the prime minister’s plans for managing and spending EU rescue funds. Renzi says the plan has been improved after his demands, but he’s been insisting on further conditions, including that Italy tap a European Stability Mechanism credit line for health spending.

“The real issue is, should we spend more money on health with the ESM?” Renzi said after his announcement on Wednesday.

Switzerland had shied away from more severe lockdowns, but officials now fear that hospitals could be pushed beyond their limits
World
1 year ago

Alexei Navalny to fly to back Russia, after being poisoned in August

‘Russia is my country, Moscow is my city and I miss it,’ he wrote on Instagram
World
1 year ago