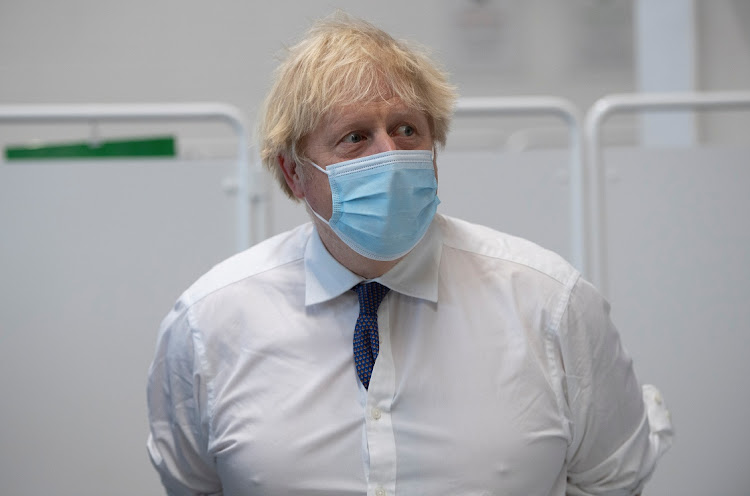 London — Prime Minister Boris Johnson says Britain is in “a race against time” to roll out Covid-19 vaccines as deaths hit record highs and hospitals run out of oxygen, with his top medical adviser saying the pandemic’s worst weeks were imminent.

A new, more transmissible variant of the disease is surging through the population, with one in 20 people in parts of London infected, threatening to overwhelm the health service with hospitals overloaded with patients.

The death toll in the UK has been soaring and stands in excess of 81,000 — the world's fifth-highest toll — while more than 3-million people have tested positive.

In a bid to get on top of the pandemic and to try to restore some degree of normality by the spring, Britain is rushing out its largest vaccination programme, with shots to be offered to about 15-million people by the middle of next month.

“It’s a race against time, because we can all see the threat that our NHS [National Health Service] faces, the pressure it’s under, the demand in intensive care units, the pressure on ventilated beds, even the shortage of oxygen in some places,” Johnson said on a visit to a vaccination centre in Bristol, in southwest England.

“This is a very perilous moment. The worst thing now for us is to allow success in rolling out a vaccine programme to breed any kind of complacency about the state of the pandemic.”

The government’s chief medical adviser Chris Whitty had earlier warned the situation was set to deteriorate. “The next few weeks are going to be the worst weeks of this pandemic in terms of numbers into the NHS,” he told BBC TV.

“Anybody who is not shocked by the number of people in hospital who are seriously ill at the moment and who are dying over the course of this pandemic, I think, has not understood this at all. This is an appalling situation,” he said.

During the peak of the first outbreak in April, about 18,000 people were in hospital but now there are 30,000, Whitty said, describing it as “the most dangerous time we've really had in terms of numbers”.

Johnson’s government is pinning its hopes on a mass vaccination programme after Britain became the first country to approve vaccines developed by Oxford-AstraZeneca and by Pfizer/BioNTech, and approved Moderna’s shot on Friday.

Its plan, announced on Monday, envisages 2-million shots being delivered at about 2,700 centres a week in England by the end of January, with the aim of immunising tens of millions of people by the spring and all adults offered a vaccine by the autumn.

Johnson said 2-million people had already been given the vaccine — more than any other European country — but admitted that inoculating 15-million people in the four highest risk levels, including those over 70 and front-line health workers, by a February 15 target was “a huge ask”.

“We believe it’s achievable, we’re going to throw absolutely everything at it, to get it done,” he said.

Opposition Labour leader Keir Starmer, who has repeatedly accused Johnson of being too slow to respond to the pandemic, said the prime minister's indecision had cost lives and worsened the economic impact “We shouldn’t be facing the slowest recovery and we shouldn’t be suffering the tragedy of so many deaths every day from this virus,” he said.

Ministers and health chiefs have pleaded with people to respect lockdown measures and stay at home, amid fears some people are not adhering to the rules strictly enough, along with concern that the virus is being spread in supermarkets.

“Where we have to tighten them, we will,” Johnson said of the rules.

Limited curbs will be imposed from Friday until February 7 after Tokyo recorded 2,447 cases of the coronavirus in one day
World
8 months ago
Next Article