Air quality in Indian capital improves substantially in October thanks to late monsoon, but the reprieve could prove temporary 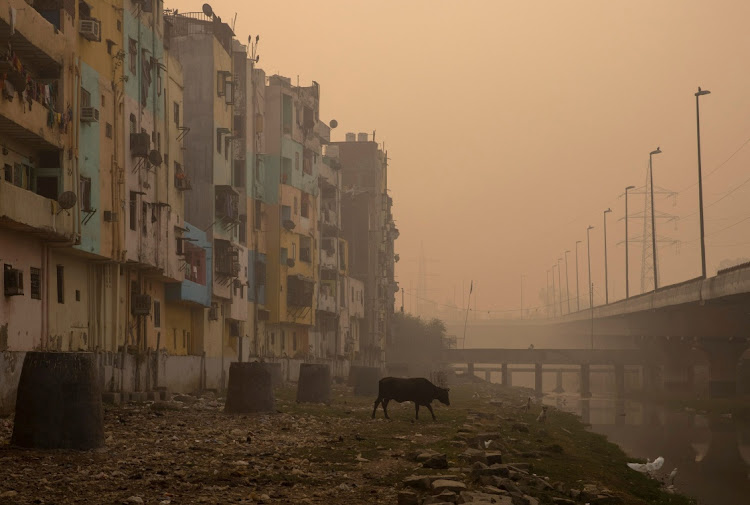 A residential area is shrouded in smog in New Delhi, India, on November 9 2020. Picture: REUTERS/DANISH SIDDIQUI

New Delhi — Favourable weather conditions led to a rare easing of pollution in India’s capital New Delhi, with residents last month breathing the cleanest air in at least four years. But authorities are warning that air quality is set to drop sharply in November.

A delayed end to the monsoon, intermittent rains and a sharp pickup in wind speeds ensured that the concentration of hazardous, small airborne particles known as PM2.5 in a cubic metre of air averaged 72 in October when air quality typically takes a turn for the worse.

That was sharply down from an average concentration of 126 recorded in October 2020 — 25 times over the World Health Organisation’s safe limit — according to data compiled by the state-run Central Pollution Control Board.

But a confluence of factors, including falling temperatures, a drop-off in winter wind speeds and farmers preparing to burn farm waste of the previous rice crop to ready their fields for planting the wheat crop, is likely to turn the air hazardous.

“Because of frequent rains, most farmers didn’t get to burn crop stubble, and now they have an even shorter window to dispose of crop waste,” said Anumita Roychowdhury, an executive director at the Centre for Science and Environment think-tank.

“As rains ebb, more and more farmers will rush to burn rice stubble, and that will happen when broader weather patterns will allow pollutants to hang in the air, resulting in a thick smog,” Roychowdhury said.

Poor air quality over the capital is a reminder of the challenges India faces in reducing pollution as world leaders are meeting at the UN COP26 summit in Scotland to agree on strategies to fight global warming.

Adding to the concerns, the Diwali festival of lights falls on Thursday when Indians off firecrackers as part of an ancient Hindu tradition. Delhi has banned the sale of firecrackers, but authorities rarely get to enforce such curbs.

Crop waste burning accounts for about a quarter of air pollution in October and November.

Air pollution inside houses contributed to more than one-million deaths in 2010, making it the second-biggest health risk factor in India
World
1 year ago