Air pollution inside houses contributed to more than one-million deaths in 2010, making it the second-biggest health risk factor in India 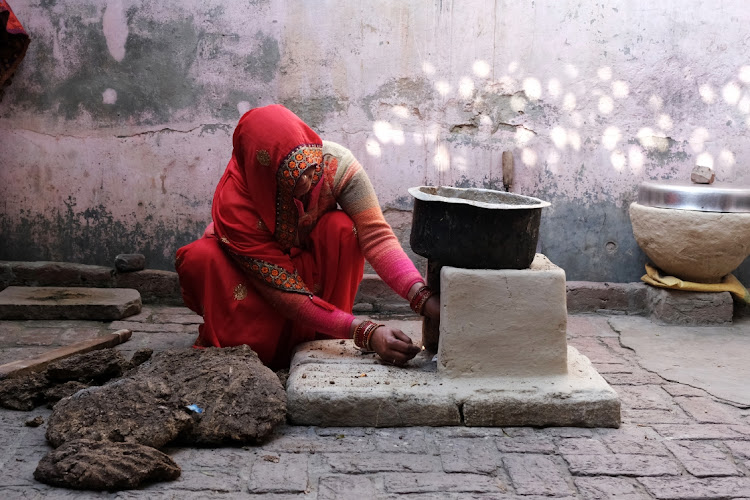 New Delhi/Mumbai — Five years ago, Indian Prime Minister Narendra Modi’s government offered Indian women a chance to dramatically improve their lives with cooking fuel subsidies, in what became one of his administration’s most celebrated campaigns.

Now, hamstrung by a widening fiscal deficit, New Delhi has been slowly reducing the size of those handouts — a shift that risks upsetting women voters and potentially exposing millions to heavier levels of pollution.

In Allauddinnagar, a village in India’s Uttar Pradesh state, Laxmi Kishore, a homemaker, is worried. Cooking food for her family used to be an ordeal that involved using cheap fuels like cow dung, crops and wood, which burn with a sooty flame and left her teary eyed and choking. When Modi’s programme made liquefied petroleum gas cylinders affordable to her some years ago, she breathed more easily.

Now Kishore is preparing to return to her earthen stove and the smoggier fuels her ancestors used because the subsidy that landed in her account each time she refilled a cylinder has stopped arriving. Her husband lost his job as a cashier in a highway restaurant during 2020’s Covid-19 lockdown, making a cooking cylinder unaffordable to them without the handout.

“I’m dreading a return to my earlier pain,” she said. “It will mean less sleep and suffering in the smoke again.”

Provisions for the LPG cooking fuel subsidies were halved in the federal budget for the fiscal year ending March 2022 to 124.8-billion rupees ($1.7bn) from 255-billion rupees a year earlier. A spokesperson at India’s oil ministry didn’t respond to a request for comment.

The government continues to modulate the “effective price” for subsidised domestic LPG, oil minister Dharmendra Pradhan said in a written response to questions from parliament. “The subsidy on the product increases/decreases with the increase/decrease in the product price in international market and decision of government on subsidy,” he added.

The programme, launched in 2016 by the Modi government, offered cash rebates for purchasing an LPG connection and a loan for the first canister of the fuel and stove. More than 80-million women from extremely poor households had received such LPG connections by January 1 2021. The government announced plans in the latest federal budget to extend the benefit to another 10-million households, mostly located in the remote forests and hilly areas.

To help the poor struggling with lockdowns, in 2020 the government also offered free LPG refills of three cylinders. India’s LPG consumption in 2020 surpassed petrol for the first time ever over a calendar year, government data shows.

But the free supplies were a one-off move and the finance director of Indian Oil Corp, the largest retailer of the cylinders, said in February that the government had stopped subsidising the fuel for consumers in 2020 except in the most remote areas.

Meanwhile, prices of LPG have surged across the country. The cost of a typical LPG cylinder sold by Indian Oil in Delhi has increased 40% since November to 819 rupees. Some opposition parties are focusing on the issue of high LPG prices for regional elections against Modi’s Bharatiya Janata Party.

Providing cooking gas has been one of the biggest successes of Modi’s flagship welfare programmes, which also included building toilets and houses for the poor.

“The elephant in the room is the price rise,” said Arati Jerath, a New Delhi-based author and political analyst. “The LPG programme started as a very popular scheme, but has been petering out because of the price increase. Modi will have to come up with a new emotive issue as the government is running out of money to indulge in populism measures.”

LPG is crucial for reducing domestic pollution in India. The country has the highest instances of premature deaths in the world due to emissions from burning fossil fuels, including coal and oil products, according to research done by Harvard University in collaboration with other academic institutions.

“Withdrawal of subsidy and increase in prices is likely to affect LPG consumption, particularly in rural areas where alternatives such as firewood, agricultural residue, dung cakes are readily available,” according to Ashok Sreenivas, a senior fellow at Prayas, an Indian advocacy group that works in energy policy.

An increase in the use of alternative solid fuels will “definitely impact the health” of rural women and children as these release particulate matters that can cause illnesses including lung cancer, heart ailments and even stroke, he said.

India faces issues other than price in getting poorer populations to adopt cleaner fuel. Availability is also a problem in far flung areas that are hard to reach, Prayas said in a December report. India’s oil ministry has said beneficiaries of the programme availed of less than two refills of the three free ones offered over nine months in 2020.

Air pollution inside houses, primarily due to burning solid fuels like wood, dried dung and biomass, contributed to more than one-million deaths in 2010, making it the second-biggest health risk factor in India, according to a 2015 report by Steering Committee on Air Pollution and Health Related Issues.

The International Energy Agency in a special report in February said that despite the recent success in expanding coverage of LPG in rural areas, 660-million Indians haven’t fully switched to modern, clean cooking fuels. Higher costs and fewer subsidies might only make it harder to draw new users. Vehicular exhaust, industrial emissions and other factors have already made India home to 14 of the 20 most polluted cities in the world.

The task of encouraging the poor to use the cleaner fuel becomes even more challenging with millions losing their jobs during the Covid-19 pandemic. Poor households are more sensitive to higher fuel prices as they can easily shift to cheaper alternatives for which they need to pay just a few cents every day, rather than spending as much as $11 per cylinder upfront.

“Prices are rising and the government has stopped compensating us,” said Kaushal Kishore, Laxmi’s husband. “I can’t afford LPG any further and this is my last cylinder till I find myself a job.”

India’s ‘cash-for-clunkers’ plan needs to offer a real incentive if it is to ...

India’s ‘cash-for-clunkers’ plan needs to offer a real incentive if it is to ...