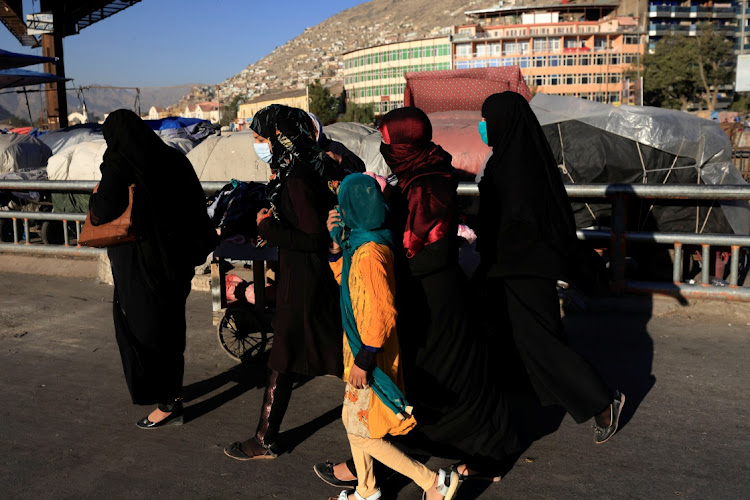 London/Islamabad — Marzia has dedicated the past decade to treating some of Kabul’s poorest women, but the midwife has packed up her stethoscope along with precious photos, ahead of leaving Afghanistan with her husband and son.

The health worker is part of a brain drain of professional women — entrepreneurs, lawyers, scientists, journalists and more — that many predict will set the country back decades.

“I am not leaving happily, but with a broken heart,” she said. “So many educated and professional women like me are leaving because of threats to our lives. But this will be devastating for the country in the long term,” said Marzia, who asked not to use her full name.

Tens of thousands of people fled Afghanistan in a mass evacuation arranged by the US and partner countries after the Taliban took control on August 15. Others have left with help from international organisations, or under their own steam, fearing danger in the new Taliban era.

Marzia, 34, said the exodus would hurt the country’s economy as well as decimate the aspirations of younger generations.

When the Taliban were last in power from 1996-2001, they barred women from work and imposed harsh restrictions on their daily lives, flogging or stoning those who broke the rules. Education for girls was also banned.

Since then, there has been a huge international effort to boost women’s education, empowerment and economic opportunities.

“The brain drain is a huge concern,” said Manizha Wafeq, president of the Afghanistan Women Chamber of Commerce and Industry (AWCCI).

“We all invested so much in creating a great pool of professionals to support the country — in politics, the economy, engineering, the environment — everything.”

There are an estimated 57,000 women-led businesses in Afghanistan, from handicraft traders to dried fruit exporters. They employ about 130,000 people, and provide work for thousands of women making handicrafts at home.

Wafeq said women had made inroads into traditionally male sectors such as IT and media services. Even running a cafe is considered man’s work given it is often taboo for women to interact with men outside the home.

The loss of women exemplars will hit girls especially hard.

“We had created a lot of role models for the next generation,” Wafeq said. “They were seeing so-and-so has started a travel agency, a construction company, an IT company, and saying ‘I can do it too’. If these women leave, we’re losing hope.”

The Taliban say women will be allowed to work in accordance with Islamic law, but have not clarified exactly what this means.

Many women, including female civil servants, have already lost their jobs; others have been told to stay home. The AWCCI has asked the Taliban to let women-led businesses resume operations, and is awaiting a meeting with officials.

“Many women don’t want to leave. They’ve given all their lives to build these businesses,” Wafeq said.

Zahra Rezaie, 34, who runs a carpet business providing work for 200 weavers, is among those who have fled. Now in Albania and hoping to get to the US, Rezaie said she had decided to leave partly because she lived alone, “a big taboo for the Taliban”.

“I was so scared,” said Rezaie, who still runs her business from abroad.

Before the Taliban takeover, one in five urban women worked. Women accounted for about a quarter of civil servants and MPs, and tens of thousands were studying at universities.

Economists say broadening women’s opportunities helps lift their families, communities and countries out of poverty too. Experts fear the exodus of professionals could also cut women’s future access to healthcare and education.

The Taliban say men should not teach girls or women and many men do not let male doctors treat their wives and daughters.

Afghanistan has more than halved maternal and child mortality rates in the last 20 years, but the World Bank says a collapsing health service could see this now rise by a third.

Rahimi, who worked for an organisation providing victims with legal support and trauma counselling, was on her way to the airport with family when the Taliban took Kabul. “I thought I’d be killed on the spot,” said Rahimi, now rebuilding her life in Canada.

Rights activists, lawyers and judges have also fled or gone into hiding, fearing reprisals from Taliban supporters. Female judges have received death threats after the Taliban released some men they jailed. Others are at risk after ruling against men in domestic violence, divorce and custody cases.

Rahimi said women would no longer get justice in court as the Taliban did not accept a woman had the right to judge men. “Society will go back to past centuries,” she said.

“When I think about all we’ve done in the last 20 years to build our country — it’s now a big zero.”