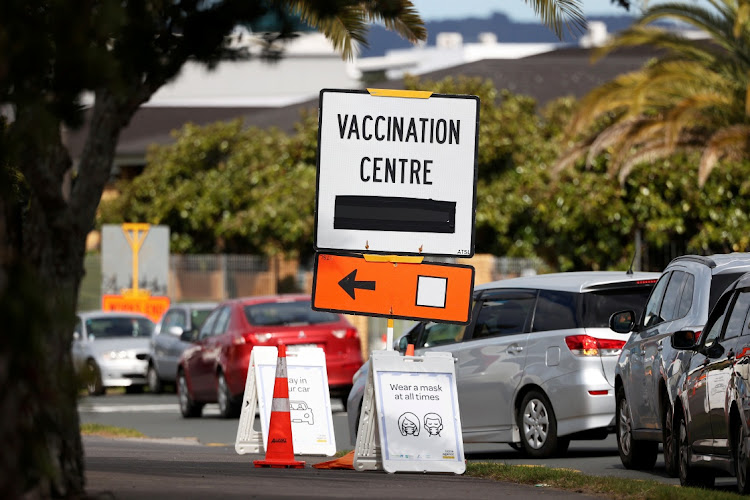 A vaccination centre sign directs the public during a lockdown to curb the spread of a COVID-19 outbreak in Auckland, New Zealand on August 26 2021. Picture: REUTERS/FIONA GOODALL

Once the envy of the world for its handling of the pandemic, New Zealand is now preparing its health system for an influx of Covid-19 patients as it pivots away from its elimination strategy.

Health ministry modelling forecasts more than 5,000 cases a week in the Auckland and Northland regions in 2022, even assuming 90% of the eligible population is vaccinated, health minister Andrew Little said on Thursday. The figure does not include the rest of the country, where modelling is still being conducted.

“That’s the worst-case scenario, but even at that level the vast bulk of people who would get infected would recover at home, or somewhere else in the community, because the majority will be vaccinated and won’t suffer as badly as those who are unvaccinated,” Little said in an interview with Radio New Zealand.

New Zealand’s health system has not yet been tested by surging Covid-19 cases, but ministers now concede a lockdown in largest city Auckland won’t beat the infectious Delta strain and are preparing to ease restrictions as vaccination rates rise. Daily new case numbers are worsening, with 71 infections reported on Thursday, the most since early September.

For most of 2020 and much of 2021, while many countries hunkered down as the virus tore through populations, New Zealanders were able to enjoy life largely unencumbered by restrictions after community transmission was successfully eliminated. Concerts were held, rugby games continued, bars and restaurants were open, children attended school and apart from the border being closed, life was seemingly normal.

But the Delta variant put paid to all that. In August, a single positive case resulted in the entire country being put into the strictest level of lockdown. More than eight weeks later, Auckland is still locked down, but Delta continues to circulate. The virus has recently seeped out into the neighbouring regions Northland and Waikato, resulting in further lockdowns.

With only about 60% of the eligible population fully vaccinated, the government is rushing to inoculate as many people as possible before the outbreak spreads further.

Little’s plan marks a move away from isolating all Covid-19 patients in government quarantine facilities or hospitals. The minister said he’s confident hospitals will have the capacity to cope with acute cases.

“In terms of capacity to respond for additional patients, I’m confident that it is there and the planning is there to make sure we manage that carefully,” he told a news conference.

Little did not put a date on when the plan would be introduced, saying it depends on vaccination rates.

New Zealand’s slow vaccine rollout has seen it slide down Bloomberg’s Covid Resilience Ranking. For a long time it held the top spot; now it is 38th, one place ahead of Bangladesh.