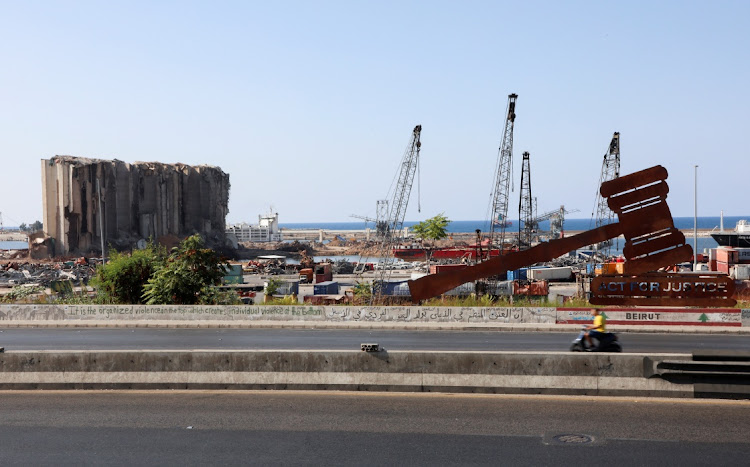 A person rides a motorbike near the site of the 2020 port blast in Beirut, Lebanon, on September 27 2021. REUTERS/MOHAMED AZAKIR

Beirut — A probe into the catastrophic explosion at Beirut port was frozen on Monday when a former minister wanted for questioning as a suspect filed a case questioning the lead investigator’s neutrality, a judicial source said.

The August 4 2020 Beirut port blast killed more than 200 people, injured thousands and destroyed swathes of the city. It was caused by a large quantity of explosive chemicals stored at a warehouse unsafely for years.

The judicial probe into the explosion, one of the biggest non-nuclear blasts ever recorded, has made no progress, angering many Lebanese. They include families of the victims, who are furious that no senior officials have been held to account.

Judge Tarek Bitar was appointed lead investigator after the removal of his predecessor in February on similar grounds.

Bitar was notified on Monday of the case against him filed by former interior minister and MP Nohad Machnouk, the judicial source told Reuters. “Now the sessions will be cancelled and Bitar will stop looking at the file until the court of cassation decides either to accept the case or reject it,” the source said.

There was no immediate comment from Bitar, who is not permitted to speak to the media.

The probe has faced political pushback from powerful parties that have alleged bias in the investigation.

The court of cassation issued a decision in February that removed the first judge, Fadi Sawan, from the case after a request from two former ministers he had charged, Ali Hassan Khalil and Ghazi Zeaiter.

Bitar issued requests in July to question former prime minister Hassan Diab and other top officials charged by his predecessor with negligence over the blast. All have denied wrongdoing.

On September 16 he issued an arrest warrant for former public works minister Youssef Finianos after he failed to show up for questioning, the first against a top official in the case.