A third dose is associated with at least a 10-fold reduction in the risk of falling seriously ill, researchers say 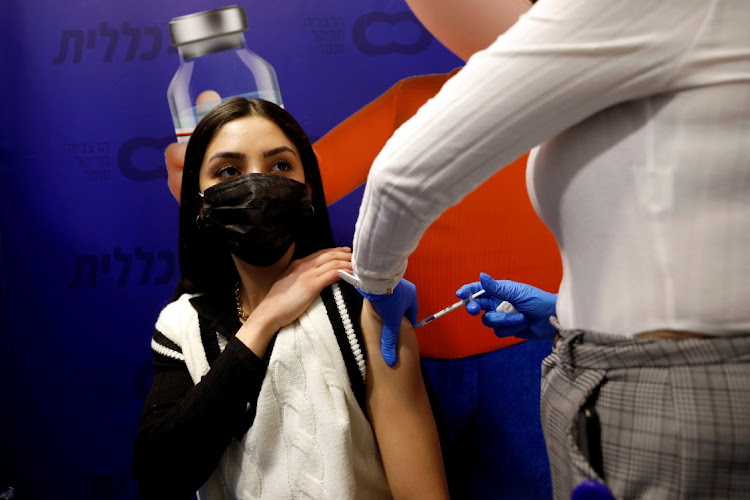 A woman receives a vaccination against the coronavirus disease at a temporary Clalit healthcare maintenance organisation centre in Herzliya, Israel, in this February 3 2021 file photo. Picture: REUTERS/AMIR COHEN

A third Covid-19 vaccination shot appears to significantly curb a Delta-led surge in cases and prevent severe illness, according to a study in Israel, the first country to offer boosters to seniors.

Twelve days or more after a booster dose of vaccine made by Pfizer and its partner BioNTech, the risk of a confirmed Sars-CoV-2 infection decreased 11.4-fold relative to people given only two jabs, researchers from Israel’s ministry of health and key scientific institutes found. A third dose was associated with at least a 10-fold reduction in the risk of falling seriously ill, according to the research released Friday.

The more-infectious Delta variant has fuelled a resurgence of Covid-19 cases and hospitalisation in many countries, including Israel, prompting plans to administer extra doses to those already immunised. Israeli authorities approved a Pfizer-BioNTech booster jab for vulnerable citizens on July 12 and began offering it on July 30 to all people 60 or older who had been immunised for at least five months.

“The results of such a policy are of importance for countries that seek strategies to mitigate the pandemic,” said Yinon M Bar-On from the Weizmann Institute of Science and colleagues in the paper. “Our findings give clear indications of the effectiveness of a booster dose even against the currently dominant Delta variant.”

The analysis is based on medical findings from the health ministry database extracted on August 24. The researchers chose 12 days as the time it took the booster to curb confirmed infections.

The data may be subject to biases and confounding, the scientists said. Even still, a more conservative sensitivity analysis suggested a third dose yields about a fivefold improvement in protection against confirmed infection.

The case for administering additional vaccine doses is controversial, since it is seen reducing supplies needed to immunise people in low- and middle-income countries, where vaccination rates remain stubbornly low.

US public health advisers will meet on Monday to discuss boosters, with the White House eager to start a nationwide rollout by September 20. The rush is in response to waning antibody levels in the face of Delta, the most-infectious coronavirus variant to emerge so far.

Israel has been progressively lowering the age of eligibility for a third dose. The health ministry on Sunday said it is expanding its drive to all residents 12 and older.

The nation’s swift vaccination campaign led to more than half of its people being fully vaccinated against Covid-19 by end-March, driving the incidence of cases to less than two cases per million per day by June from about 900 cases in mid-January, the study showed.

Cases in Israel have climbed in recent months as the Delta variant became the dominant cause of Covid-19 there.

The EU has said it wants to back the development of vaccine production hubs in at least three African countries, including Senegal and SA.
Business
2 weeks ago

People who had earlier Covid-19 less likely to get Delta than those vaccinated ...

People who had earlier Covid-19 less likely to get Delta than those vaccinated ...