Bangladeshi farmers have suffered losses of $39m according to group, with scientists looking at heat-tolerant varieties as food insecurity grows 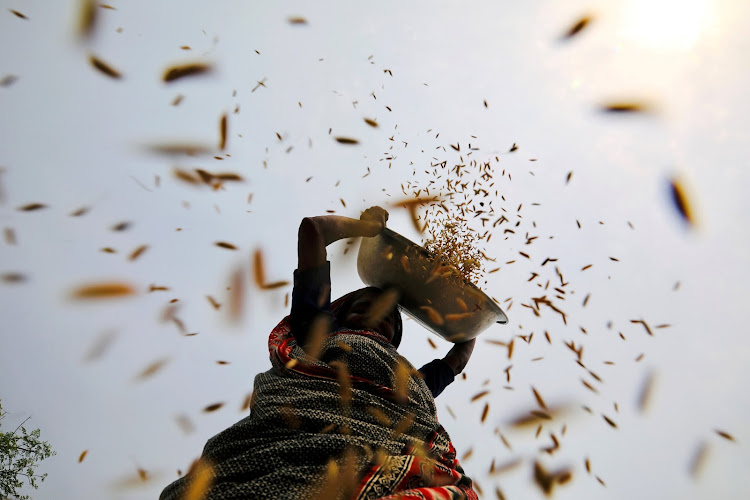 A woman processes paddy rice she harvested from a field on the outskirts of Dhaka, Bangladesh. Picture: MOHAMMAD PONIR HOSSAIN

Bangladesh — Standing in his paddy field in northeast Bangladesh, Shafiqul Islam Talukder holds a handful of empty stalks — all chaff, with no rice grains.

Two days of sudden, intensely hot air that swept across the country in April disrupted the rice’s growth, destroying the crop his family was supposed to survive the year on, the farmer from Kishoreganj district said.

“The same thing happened to the adjacent field of mine. My dream crop is finished,” he said with tears in his eyes. “I can’t think of how to support the family for a whole year. I invested my savings and planted 5ha of high-yielding rice. Now it’s all over.”

The heat stress — caused by a mix of high temperatures, low rainfall and low humidity — ruined thousands of hectares of crops in Bangladesh’s main rice-growing region this spring, with climate experts warning the phenomenon could threaten food supplies.

More than 36 districts were affected when temperatures reached as high as 36°C for two consecutive days in early April, according to the government’s Bangladesh Rice Research Institute (BRRI).

The average maximum temperature for April in Bangladesh is about 33°C, according to the country’s meteorological department.

While other crops were affected — including maize, peanuts and bananas — department of agricultural extension figures shared with the Thomson Reuters Foundation show the bulk of the damaged plants were rice.

According to the data, more than 68,000ha of rice were either partially or completely destroyed over the two days, affecting more than 300,000 farmers and resulting in losses of an estimated 3.3-billion taka ($39m).

Bangladesh already faces increasingly extreme weather — including droughts, floods and storms — but April saw the most destructive bout of heat shock since the BRRI started keeping records in 2012.

Heat stress is a fairly new problem for Bangladeshi farmers, said Nazmul Bari, an entomology expert at the rice institute. “There was no notable heat shock before [2012],” he said, adding that the first recorded incident affected crops in only four districts.

The heat experienced this April was the worst “attack” yet, Bari said. “The temperature was rising day by day [and] there was not much rain. So the humidity in the air was very low. That is the big reason for this massive heat shock.”

“Temperature is very crucial for pollination and high temperatures during this stage may cause sterility,” he said.

At an annual rice festival in Ballabhpur haor, a wetland area, there were no smiles on the farmers’ faces this year, only talk of crop devastation.

“I have never seen such hot air in my 60 years,” said Helal Mia, a farmer from Ballabhpur village who lost 4ha of rice to heat stress. “I have borrowed money for paddy cultivation. How can I repay the loan now? How can I support my wife and children all year round? I can’t see anything but darkness before my eyes.”

Climate experts warn that if Bangladesh continues to experience bouts of heat stress, the country may face food shortages.

About a quarter of the nation’s approximately 160-million people are already considered food insecure, meaning they have inadequate or uncertain access to nutritious and safe food, according to the UN’s World Food Programme.

“We have to pay more attention to heat shock,” said Saleemul Huq, director of the International Centre for Climate Change and Development based in the capital Dhaka.

Huq predicted that if the incidence of heat stress persists, it could result in an overall 20% decline in rice production this year.

Huq and other agricultural experts say that, along with making sure rice crops are sufficiently watered, the best way to minimise the effects of heat stress is to encourage farmers to plant more heat-tolerant rice varieties.

Sazzadur Rahman, principal scientific officer of the BRRI’s plant physiology division, said the institute is developing new varieties that can stand up to heat and early results look good.

“It yields well, it yields fast. The rice lines we developed will be able to tolerate up to 38°C of daytime temperature,” he said. “Heat shock could affect our food security, but we are trying to prevent this disaster.”

Rodents have swarmed schools, homes and hospitals in New South Wales and Queensland
World
3 weeks ago

This year the virus, which is not harmful to humans, has wiped out at least 20% of the breeding herd in northern China
World
2 months ago

Air pollution inside houses contributed to more than one-million deaths in 2010, making it the second-biggest health risk factor in India
World
3 months ago
Next Article