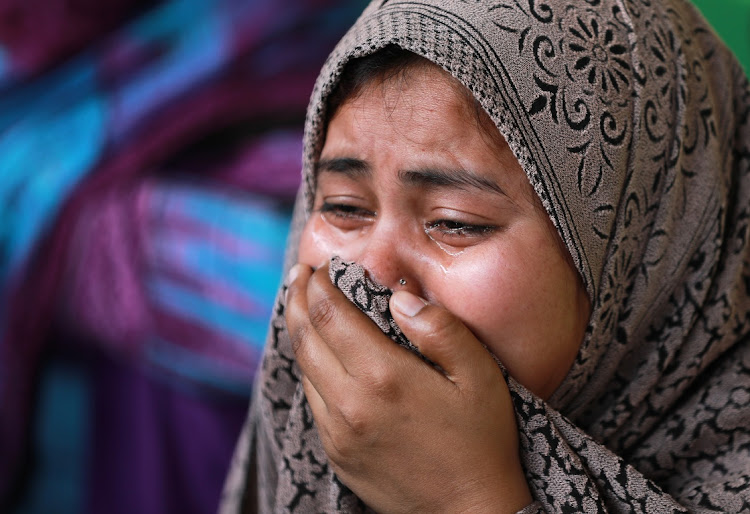 Rukhsar, a Muslim woman who fled her home along with her family after Hindu-Muslim clashes triggered by a new citizenship law, reacts as she takes shelter in a relief camp in New Delhi, India, on March 3 2020. Picture: REUTERS/ANUSHREE FADNAVIS

The Hindu-Muslim clashes in the city’s northeast — the worst communal riots in Delhi for several decades — killed more than 40 people and injured hundreds. Thousands have been displaced after their homes were torched.

Many of those uprooted were Muslims, while there were Hindus among the dead and injured.

The capital city of more than 20-million people is likely to now see greater segmentation along religious lines as has happened in other Indian cities, such as Mumbai and Ahmedabad, said Miloon Kothari, a housing and human rights expert.

“We generally see greater ghettoisation in a city after a riot because of fear and insecurity, with city authorities themselves sometimes reorganising neighbourhoods that entrench that segregation,” he told the Thomson Reuters Foundation.

“Apartheid cities are being created due to political, planning and gentrification processes that divide communities further, impoverish the poor, and makes it easier to target vulnerable communities again.”

Displacements caused by flooding, beautification of cities, and major sporting events such as the 2010 Commonwealth Games in Delhi and the 2016 Rio Olympics also led to ghettoisation of the poor, said Kothari, a former UN special rapporteur for adequate housing.

Delhi has long drawn migrants from neighbouring states, who often live in informal settlements because of high rents.

Like in other Indian cities, Delhi’s informal rules and deep-rooted biases also discriminate against religious minorities and even unmarried people, or those with certain food preferences or professions.

Deadly communal clashes in Mumbai in 1992-1993 and in the western city of Ahmedabad in 2002 led to Muslims being pushed out of mixed neighbourhoods to the fringes of the city, said Darshani Mahadevia, a professor at Ahmedabad University.

“The Muslim poor especially ... choose to live in all-Muslim neighbourhoods because they feel insecure,” she said on the sidelines of a land conference in Delhi.

“Segregation keeps the communal pot boiling for political reasons also,” she said, citing a law in the western state of Gujarat that restricts Muslims and Hindus from selling property to each other in areas deemed as sensitive.

The choice between living in a “ghetto or mixed neighbourhood” was a difficult one for many Muslims, writer and journalist Ghazala Wahab said on Twitter.

#Ghetto or Mixed Neighbourhoods. A Thread.

I was born in a Muslim area. However, as soon as my father could afford, he built a house in 'Hindu' area, which was better & more developed. To begin wth, it had sewer line. So now we could have attached bathroom wth flush toilets 1/10

Then they forewarned us tht r house would b attacked. And it was. One evening a mob, armed with stones and fire torches collected outside r gate shouting slogans. Then they started throwing stones, breaking most of the windows, vandalising our cars 5/10

Families often had to weigh the risk of their home being torched against a better life, said Wahab, whose own family moved to a more modern “Hindu” area from a ghetto — where conditions had since worsened.