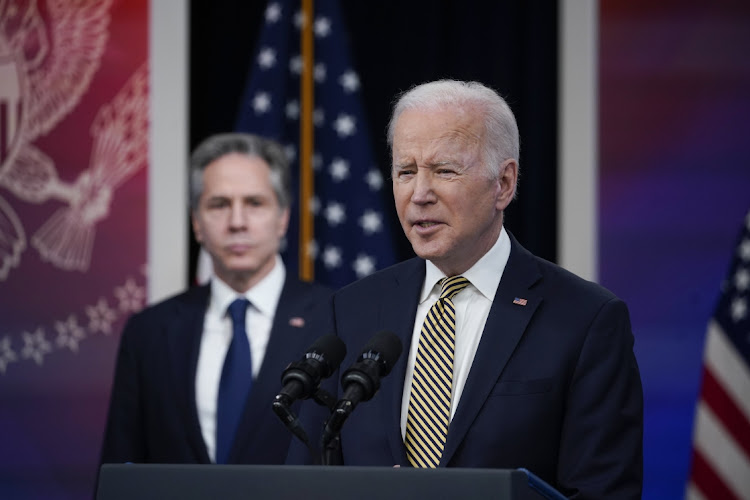 Washington —  US President Joe Biden announced an additional $800m in security assistance to Ukraine on Wednesday, even as his position on a no-fly zone did not change after Ukrainian President Volodymyr Zelensky’s urgent appeal to the US Congress for military help to fend off a Russian invasion.

Addressing Zelensky's remarks in his speech, Biden said the US has offered Ukraine $1bn in security aid, adding America will continue to give Ukraine weapons to fight and defend themselves, offer humanitarian relief and support Ukraine’s economy with additional financial assistance.

“This new package on its own is going to provide unprecedented assistance to Ukraine, and includes 800 anti-aircraft systems,” Biden said, to stop Russian planes and helicopters attacking Ukrainians.

He called Putin a "war criminal".

“More will be coming as we source additional stocks of equipment that ...we are ready to transfer,” he said.

The new funds will come from a spending bill Biden signed into law that includes $13.6bn in new aid to Ukraine.

In his address to Congress, Zelensky compared the attacks in Ukraine to the Japanese attack on Pearl Harbor that pulled the US into World War 2, and begged legislators, and Biden directly, for more help.

“This is a terror that Europe has not seen for 80 years, and we are asking for our life, for an answer to this terror from the whole world. Is this a lot to ask for? To create a no-fly zone over Ukraine to save people?” Zelensky asked through an interpreter.

“If this is too much to ask, we offer an alternative,” he said. “You know what kind of defence systems we need,” adding that he knows the US has them.

Biden has referred to the creation of a no-fly zone over Ukraine as “World War 3” , and the Pentagon has refused requests to send fighter jets to Ukraine.

Earlier on Wednesday, Russia and Ukraine both emphasised newfound scope for compromise as peace talks were set to resume three weeks into a Russian assault that has so far failed to topple the Ukrainian government.

On Tuesday, the White House said Biden will travel to Brussels for a March 24 Nato summit on Russia’s invasion of Ukraine, which Moscow terms a “special military operation” to disarm and “denazify” its neighbour.

Biden has ratcheted up sanctions imposed on Russia in recent days. He has called for a suspension of Russia's trading status that affords its exported products lower tariffs in the international arena and announced a ban on Russian oil and other energy imports.

Meanwhile, in a speech to government ministers broadcast on Wednesday, Russian President Vladimir Putin said his country   would achieve its goals in Ukraine and would not submit to what he called a Western attempt to achieve global dominance and dismember Russia.

Putin also said Russia was ready to discuss neutral status for Ukraine, three weeks into a war that has killed thousands of people and forced millions of Ukrainians to flee their homes.

''The capacity for them to stay in Poland is becoming limited.” More than 1.5-million refugees have arrived in Poland since the Russian invasion of Ukraine. What happens to them next?

The deputy president says SA’s close ties with Russia do not mean the ANC government is blind to the conflict, but that it will not take sides
National
4 months ago