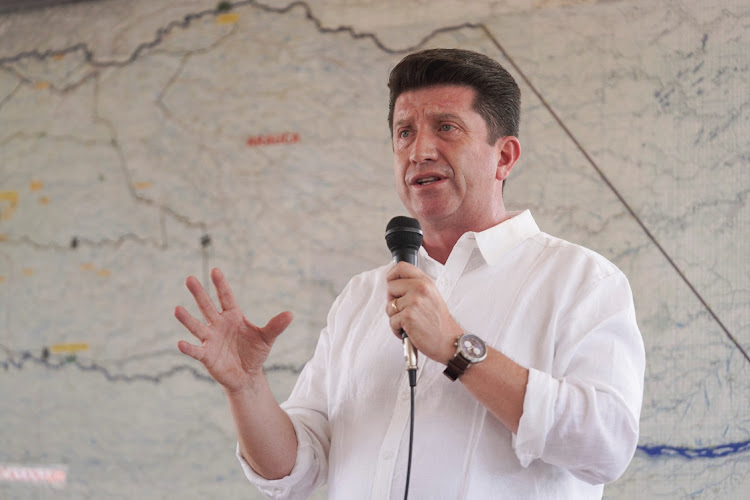 Colombia's Defense Minister Diego Molano speaks during a start of a special operation to increase security and combat criminal groups at the border between Colombia and Venezuela, at a military base in Arauca on February 12, 2022. Picture: REUTERS/NATHALIA ANGARITA

Bogota — Holding a mugshot poster reading “Most Wanted for Deforestation” and offering a $75,000 reward for information, Colombia’s defence minister Diego Molano earlier this month blamed criminal groups for the country’s worst forest fires in a decade.

So far, six of the 17 suspects shown on the poster have been arrested and charged with committing environmental crimes after turning themselves in, according to the government.

Colombia has recorded more than 300 forest fires since mid-December that have razed at least 86,000ha, including Amazon rainforest — double the forest loss recorded during last year’s fires.

The government blames the smouldering fires, concentrated in Colombia’s central and southern provinces, on dissidents from the now-demobilised Revolutionary Armed Forces of Colombia (FARC), thousands of whose rebels have returned to arms after rejecting the 2016 peace deal signed with the government.

He said FARC dissidents involved in cocaine production also had burnt trees to clear space for cattle ranching, to help them then launder drug trafficking profits.

Colombia is the world’s top producer of cocaine, with about 200,000ha of coca plants, including in its national parks and protected forest areas.

The arrest of the suspected FARC dissidents follows passage of an environmental crimes law last August. It carries prison sentences of up to 15 years as part of the government’s efforts to stem deforestation by punishing those responsible.

Since the law came into effect, 84 people have been arrested for environmental crimes that include illegal logging and gold mining, and one person has been indicted for deforesting 84ha in the Amazon, according to the government.

In Colombia’s hard-hit southern Guaviare province, mostly man-made fires, fuelled by hotter and drier conditions that cause them to burn over larger areas and at hotter temperatures, have destroyed about 15,000ha.

Huge fires that peaked in early February have since ebbed in Guaviare but have now flared up again in central Meta province in newly deforested areas, according to advocacy group Amazon Conservation.

“These are not random fires but are tightly linked to recent deforestation,” said Matt Finer, a senior research specialist with the group.

“The fires are like a big smoking indicator of the current deforestation problem in Colombia,” said Finer, who is also director of the Monitoring of the Andean Amazon Project, which uses satellite imagery and its own monitoring app.

He said that “by far the main thing to be done to prevent future major fires” is to halt the general deforestation push in Colombia which “is driving the whole process”.

According to the environment ministry, Colombia’s Amazon in January had the most “hot spots” seen in a decade.

Those can represent both fires and climbing temperatures during the dry season, which typically lasts from December to February and is peak burning season as illegal loggers and forest-clearing crews take advantage of dry weather.

Molano said about 400 soldiers have been deployed to patrol the national park and try to catch the remaining suspects thought to have started the fires, as well as to destroy roads and bridges illegally built in the jungle.

“Either they surrender or we capture them. They have nowhere to hide,” Molano said on social media.

The troops are part of the government’ anti-deforestation initiative dubbed “Operation Artemisa”, launched in 2019 to protect national parks, step-up operations against illegal armed groups and plant tens of millions of trees.

Preservation of the Amazon

The preservation of the Amazon, the world's largest rainforest, is vital to curbing climate change because of the vast amount of carbon dioxide absorbed by its trees.

But across the Amazon, the battle to stem rising deforestation is being lost. Despite government initiatives, deforestation in Colombia rose 8% to 171,685ha in 2020 compared with 2019.

Areas with the highest rates of deforestation are those also showing an increase in agriculture and cattle ranching.

In neighbouring Brazil, recent government figures show similar trends. The country, home to the largest share of the Amazon, last month recorded the highest deforestation for January, with 430km² of rainforest lost, five times what was lost in January 2021.

High global prices for beef, soya beans and other commodities often produced on cleared forest land are one driver of the losses, analysts said.

While the Colombian government blames the latest forest fires on FARC dissidents, other illegal armed groups and other contributing factors also are driving fires, experts said.

This month, 230 local and foreign environmentalists, lawyers and academics signed an open letter to Colombia President Ivan Duque saying measures to deal with forest fires must be “preventive and not reactive.”

The fires, worsened by 40 days without rain, have so far lacked a “timely and effective state response,” they wrote.

They said it was also “unacceptable” that volunteer firefighters in protected areas lacked adequate equipment to douse flames.

Angela Maldonado, head of Entropika Foundation, an Amazon rainforest conservation non-profit based in Colombia’s Amazonian city of Leticia, said criminal gangs were behind much of the clearing of forest.

With little or no state presence in remote forest areas, criminal gangs and those involved in palm oil and coca production and cattle ranching are in “complete control”, she said.

“The biggest problem Colombia has in protecting its biodiversity and to prevent deforestation is corruption,” said Maldonado, a scientist and one of the signatories of the letter.

Political graft means permits are awarded to build roads in protected areas, a blind eye is turned to unauthorised clearing of land for cattle rearing, and state development and forest protection funds are misspent or don’t reach affected areas, she said.

Manuel Rodriguez Becerra, a former Colombian environment minister, noted that both the previous and current governments made “big commitments” to stem deforestation, including a pledge by the Duque government to reach zero deforestation by 2030.

But forest losses in Colombia, and across the Amazon basin, continue to rise, Rodriguez said.

Behind deforestation is a “complex mixture” of groups that include illegal gold miners, politicians and FARC dissidents, he said.

Consecutive governments have shown “very good intentions” but they have not been able to deliver on their pledges, in part because government presence is weak in remote areas, especially in former FARC guerrilla strongholds concentrated in the country’s south and rural border areas, he added.

“Those particular regions are in a sense no-man’s-land,” said Rodriguez, a professor at Bogota’s Los Andes University.

The peace deal that led to the Farc’s demobilisation has seen once no-go conflict areas in remote swathes of rainforest open up for business and draw growing interest from criminal gangs, who have pushed deeper into tropical forests.

To stem fires and forest losses, a “permanent presence” of the state is needed in such areas, he said, allowing the military to deal with fires and deforestation on the spot.

“Without that necessary condition, I am very sceptical”, he said of government efforts to stem deforestation.

Changing the situation would require billions of dollars in investment, he said, in everything from helicopters to forest monitors as well as judicial, health and education services.

But “that money doesn’t exist ... after this pandemic the deficit is enormous,” he  said.

He highlighted high rates of deforestation in Guaviare province, where once-pristine rainforest has been cleared in recent years to build illegal roads backed by the region’s politicians.

In 2019, Colombia’s attorney-general’s office charged two mayors from the towns of Calamar and Miraflores in Guaviare province with allowing a 138km road to be built connecting the towns through a protected forest area without environmental permits.

When it comes to Guaviare deforestation, “we cannot say they are [FARC] dissidents. No, they are the elite of that region,” Rodriguez said.

Colombia to extradite Otoniel to the US

The man Colombia describes as the world’s most dangerous drug trafficker was captured during an operation at the weekend and will be extradited to ...
World
9 months ago

The preservation of the Amazon, the world's largest rainforest, is vital to curbing climate change because of the vast amount of greenhouse gas ...
Business
5 months ago

Villagers, mostly women, are being shut out of areas that for generations have been the sources of their livelihoods
World
6 months ago
Next Article