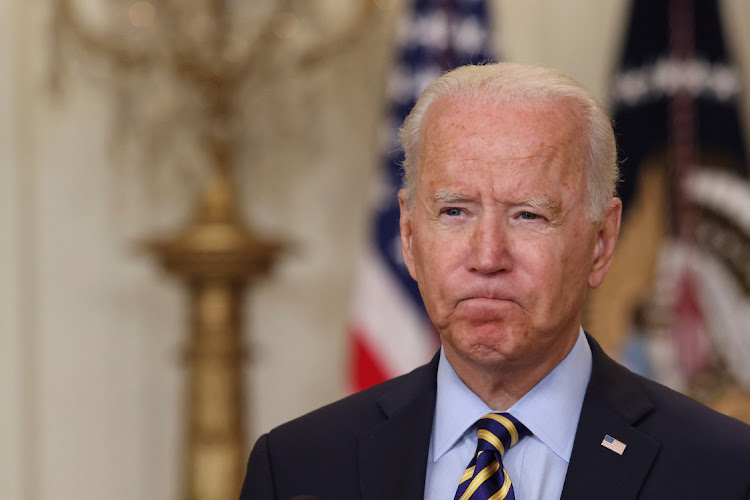 US President Joe Biden gestures as he delivers remarks on the administration's continued drawdown efforts in Afghanistan, at the White House in Washington, the US, July 8 2021. Picture: REUTERS/EVELYN HOCKSTEIN

Washington — US President Joe Biden said the American military mission in Afghanistan will conclude by August 31, arguing that the US achieved its goals and that it was not there to build a nation.

“I want to be clear: the US military mission in Afghanistan continues through the end of August,” Biden said in a speech at the White House on Thursday. He said the US will continue “to speak out for the rights of women and girls” even as the Taliban makes quick gains amid the American drawdown.

Biden reflected on America’s longest war, which will end just shy of its 20-year anniversary after the deaths of 2,448 US service members and nearly 21,000 wounded. He said the US invasion had succeeded at bringing to justice Osama bin Laden, the perpetrator of the September 11 2001 terrorist attacks, but that “there’s no mission accomplished” — an allusion to former president George W Bush’s premature declaration of victory in the Iraq war.

“I will not send another generation of Americans to war in Afghanistan with no reasonable expectation of achieving a different outcome,” Biden said. “The US cannot afford to remain tethered to policies created in response to the world as it was 20 years ago.”

Biden also said the US would continue to provide civilian and humanitarian aid, and help the Afghan defence forces maintain their air force. But, he added, countries in the region should “step up their efforts”.

He insisted it is not inevitable that the Taliban will retake control of the country, noting that the Afghan government has a far larger army and an air force.

But he said the country is “highly unlikely” to be ruled by a single, “unified” government.

“The only way there’s going to be peace and security in Afghanistan is if they work out a modus vivendi with the Taliban, and they make a judgment as to how they can make peace,” he said.

Biden and Vice-President Kamala Harris were briefed earlier on Thursday on the progress of the troop withdrawal. The president said that his military advisers had recommended withdrawing US troops swiftly, once he announced the decision. He said that as a result, there had so far been no US casualties since the announcement.

Administration officials had previously discussed temporarily relocating about 9,000 Afghans who could be at high risk for helping US forces to three central Asian nations for processing.

Biden said that so far, the US has approved 2,500 special immigrant visas for Afghans who have aided American forces, but that less than half of those eligible have exercised their right to do so. Relocation flights are set to begin in July, Biden said.

The president originally pledged to withdraw US combat troops entirely from the country by September, save for a contingent to protect its diplomats, a time line that the Pentagon recently said would be completed by late August.

But the US withdrawal — after nearly $1-trillion in spending — has only underscored the continuing turmoil in a country referred to as the “graveyard of empires”.

With the US pullout under way, tens of thousands of Afghan families are fleeing regions in the country’s north to escape the advance of Taliban militants who are clashing with Afghan security forces.

“It’s a 20-year war that has not been won militarily,” White House press secretary Jen Psaki said earlier on Thursday.

As the US handed over Bagram Air Base, its biggest facility, to President Ashraf Ghani’s government last week, the Taliban managed to take over most of Kunduz province and are now pushing towards the capital, Kunduz city.

The insurgent group known for its harsh treatment of women and adherence to a strict version of Islam now controls about half of Afghanistan’s 400 districts, 130 of which it’s taken since April.

The Afghanistan ministry of defence said this week it’s developing a plan to retake fallen regions. Despite Biden’s confidence, many military and regional experts believe a Taliban takeover is inevitable.

The US and Russia in Afghanistan: the more things seem different, the more they stay the same

Afghanistan has not been worth holding on to for both Mikhail Gorbachev and Joe Biden, given its hefty human and financial cost
Opinion
3 weeks ago