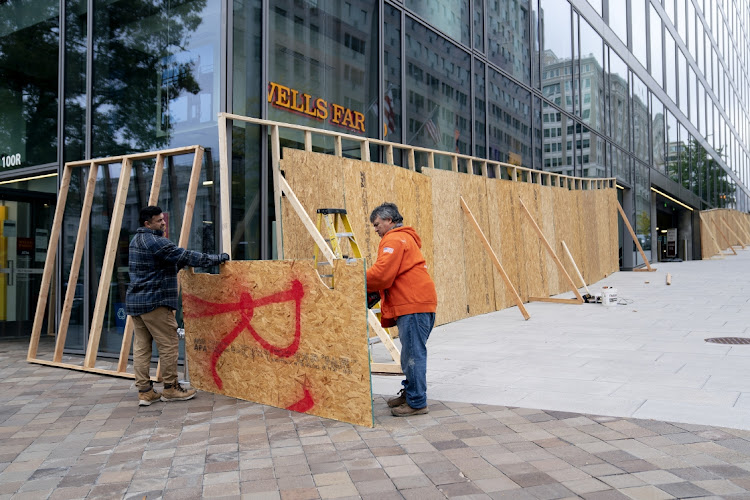 Workers prepare to board the windows of a Wells Fargo bank branch in Washington, DC on Wednesday October 28 2020. Picture: BLOOMBERG/STEFANI REYNOLDS

New York — With businesses closed and coronavirus infections rising, former Californian hotel worker Walter Almendarez said he had no choice but to dig into his savings and go to a food bank for the first time in his life to feed his family.

Meanwhile in Treme in New Orleans, the oldest Black neighbourhood in America, restaurateur Wayne Baquet, 73, has closed Lil’ Dizzy’s Cafe, seeing customer numbers plummet and deciding it was not worth risking his health to stay open.

Seven months after Covid-19 hit, only half of the jobs lost during the crisis have been recovered, leaving 12.6-million Americans jobless — compared with 5.8-million in February, as the nation heads into the November 3 presidential election.

The pandemic has exposed a reality that US workers have long confronted — labour laws are failing to protect people in a system with low union membership and growing workplace safety concerns — and low-wage workers, disproportionately women and Black, are largely bearing the costs.

“American workers have very few protections when compared to most other advanced democracies, and the pandemic has made that very, very clear with often tragic consequences,” said David Madland, a senior fellow at the Center for American Progress, a policy institute where he researches labour and economic policy.

“Unfortunately the Trump administration, especially in their response to the Covid pandemic, exacerbated those long-standing problems,” he said, noting the failure to impose national safety standards to protect workers against the virus.

With balloting under way, labour campaigners have actively encouraged workers to vote, now that they have seen that stopgap measures to confront Covid-19 have fallen short and government aid to help with job losses is exhausted.

“Little did I realise that this is a journey,” said Cassandra Brooks, who runs Little Believer's childcare centres outside Raleigh, North Carolina, where enrolment plunged as people kept their children home.

“This isn’t going to let up any time soon,” she said.

While US states have reopened to business, some with more hesitation and safeguards than others, Covid-19 cases are rising, with the US recording the most cases and deaths globally with 225,000 lives lost and 8.7-million cases.

First-time claims remain well above their 665,000 peak during the 2007-2009 Great Recession, though below a record 6.9-million in March, with certain groups harder hit.

Many of those without jobs are joining the growing US army of gig workers, independent contractors who perform on-demand services such as driving and delivering groceries.

But for many, it is the uncertainty that is making life hard. No-one knows for sure when there will be a vaccine widely shared enough to return to work and travel safely.

That translates to uncertainty about jobs like gig work, said Tyrita Franklin-Corbett, who was furloughed from her job as an auditor at a public accounting firm in May.

The single mother of a 12-year-old son from Upper Marlboro, Maryland, is a “shopper” for the online grocery pickup and delivery service Instacart but said the app-based work has wild swings in earnings and no health insurance or sick pay.

“It’s a gig, not a career,” she said. “I don’t think it’s a feasible way to make a living, especially if you have children.”

Uber and Lyft driver Mohammadzai calls on his faith as ride-hailing services take a steep hit.

“What can we do? We have to stay cool and pray and wish this pandemic to end,” he said while waiting for a fare.

Schools around the country have grappled with whether to bring children back on site or keep them learning remotely, and often are doing a combination of both.

“I’ve come to learn that there will always be some level of uncertainty,” said Josh Tinsley, a high school English teacher and board member of the Transylvania County Association of Educators, a teachers’ organisation in western North Carolina.

The district reopened schools with in-person teaching with social distancing, staggered attendance and a slate of health precautions.

“I don’t necessarily fear for myself, and it’s not that I don’t believe I won’t get it, but in regards to students I have real concern about the impact on them and the impact on their families,” the high schoolteacher said.

Almendarez lost his hotel job at Hollywood’s Chateau Marmont, a celebrity haunt where he worked for 23 years, and has been using savings, cutting costs and going to food banks.

He became an advocate for “right of recall” and “right of retention” laws that would require owners to hire back former staff and not replace them with less experienced, cheaper staff.

One such law was passed by the California legislature but was vetoed by the governor, who deemed it onerous on employers.

California has taken other steps to safeguard workers hit by the economic fallout of Covid-19, including passing a measure making it easier for workers infected on the job to get benefits and forcing businesses to report infections at work sites.

But a California voter initiative on the November ballot would, if passed, overturn a law that took effect this year reclassifying app-based workers as employees entitled to benefits like unemployment insurance and minimum wage.

Uber, Lyft and DoorDash spent more than $100m on a campaign to overturn the law, AB5, the first of its kind in the nation, saying people need and want flexible, independent work.

Madland, however, said the shift towards more contract work was making increasing numbers of workers vulnerable.

“The weak standards that we have, they don’t apply to many workers, gig workers, farmworkers, domestic workers,” he said.

The left-leaning Economic Policy Institute said workplace democracy and ability of working people to unionise was key to protect their rights.

“As union membership has declined, policies that serve working people have lost out to policies supporting corporate interests,” the institute said in a report this month.

For many workers, it’s love and faith keeping them going, along with masks, gloves and other protective personal equipment, amid concerns over weakened worker protections.

More than 1,700 health-care workers have died from Covid-19 in the US, according to figures released in September by the National Nurses United which accused state and federal governments of failing to adequately protect workers.

“It’s only the residents that make us feel appreciated,” said Laura Gee, 65, one of tens of thousands of certified nursing assistants who care for elderly patients in Florida.

“I’m there for my residents and that’s how I keep going,” said Gee, who works at the Rosewood Health and Rehabilitation Center on the outskirts of Orlando.

“I’m not there to please the administration, the nurses, or the head honchos. I’m there to take care of my residents, to make sure they’re clean and happy and to give them love.”

The US-Mexico-Canada trade agreement will be voted on in the US Senate in early 2020: here’s who’s getting what, and who is not
World
1 year ago

Up to 80,000 jobs to be lost as electric vehicles charge ahead