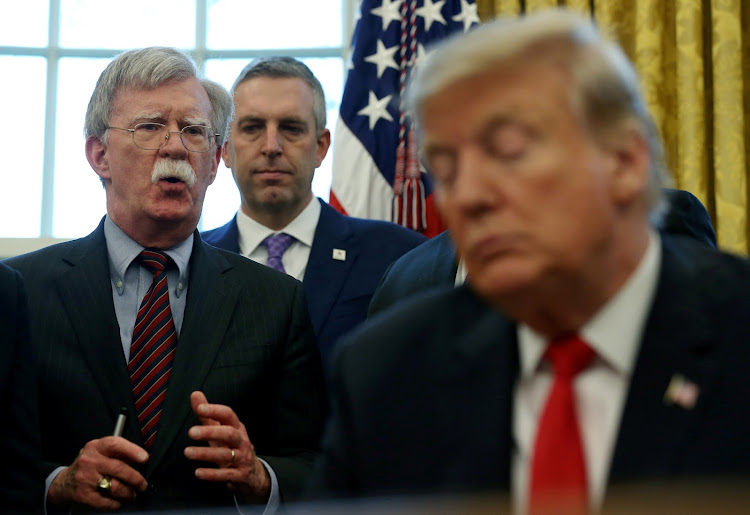 New York/Washington — Former US national security advisor John Bolton’s pending memoir is living up to its publisher’s hype as “the book President Donald Trump doesn’t want you to read”.

Trump’s justice department is heading to court in a last-ditch attempt to block the publication of The Room Where It Happened: A White House Memoir, due to be released on June 23, even as excerpts that have already appeared in the media paint a damning picture of Trump as an incurious president driven by his political self-interest.

US district judge Royce Lamberth in Washington is scheduled to hear arguments on the government’s emergency motion for a temporary restraining order and a preliminary injunction to prevent Bolton from publishing the memoir on the grounds that it contains classified information.

“It is difficult to conceive of speech that is closer to the core of the First Amendment than speech concerning presidential actions in office, including actions at the heart of the president’s impeachment,” Bolton said in a filing, urging the judge to throw out the lawsuit. “It is difficult to conceive of a greater attack on the First Amendment than the suppression of that speech in the service of a re-election campaign.”

Legal experts say that a prior-restraint order will be difficult to secure because the supreme court rejected a similar attempt by the Nixon administration in 1971 to prevent the publication of the Pentagon Papers.

That decision “eviscerates their argument for an injunction”, said Mark Zaid, a lawyer in Washington who has helped authors navigate the pre-publication review process for former government employees who have had access to classified materials.

The government’s argument may also have been undermined by the president’s claims on Twitter that the “book is made up of lies & fake stories”. If the president is correct, the government has no case, because false material can’t be classified, said Norm Eisen, a former Obama administration lawyer who served as House Democrats’ counsel during Trump’s impeachment.

How can they be irreparably harmed with publication if the book is already in the hands of journalists who are already writing reviews and articles about it?

In a filing on Wednesday, the government argued that the injunction should instruct Bolton’s publisher “to take any and all available steps to retrieve and destroy any copies of the book that may be in the possession of any third party”.

Simon & Schuster, the publisher, said in a statement on Wednesday that the request is a “frivolous, politically motivated exercise in futility”. The book is the number one best-seller in Amazon’s Kindle store. More than 200,000 copies have already been shipped to book stores big and small across the US, Bolton said in his filing.

The Washington Post, New York Times and the Wall Street Journal have already published accounts from the memoir. Bloomberg News also obtained a copy of the book in which Bolton says the president encouraged Beijing to build internment camps to house more than 1-million Uighur Muslims. Trump also urged China’s President Xi Jinping to buy agricultural products to help him win the votes of farmers hurt by tariffs on their goods, according to Bolton.

“How can they be irreparably harmed with publication if the book is already in the hands of journalists who are already writing reviews and articles about it?” asked Theodore Boutrous, a First Amendment expert at the law firm Gibson, Dunn & Crutcher. “It doesn’t make any sense.”

Trump and the justice department have their priorities all wrong, said House judiciary committee chair Jerrold Nadler, a Democrat from New York.

“In the middle of a global pandemic and near-universal recognition of the urgent need for greater racial justice and equality in our country, President Trump and attorney-general [William] Barr have instead prioritised a misguided, bad-faith, last-minute lawsuit to prevent Mr Bolton from publishing a book, the facts of which are already known to most American citizens,” Nadler said in a statement on Thursday.

“While thousands of Americans are marching in the streets to demand their civil rights, the Trump administration has once again weaponised the department of justice to serve the president’s petty, personal, political interests.”

In declarations attached to the government’s injunction request, several high-ranking officials wrote that the current version of the book contains classified information that would damage national security if published. Paul Nakasone, the director of the national security agency, wrote that publication could result in “exceptionally grave damage”.

Bolton claims he “diligently and conscientiously attempted to avoid including anything in the book that would reveal classified information”.

According to his filing, an initial review of the manuscript by Ellen Knight, the national security council’s senior director for records, access and information security management, lasted four months and resulted in “a host of revisions” and a finding that no classified information was at risk.

“At that moment, ambassador Bolton fulfilled any obligation he had under the express terms of his non-disclosure agreement with the government,” according to the filing.

That’s when the administration began stalling to keep the book from being published until after the election, Bolton claims, withholding a standard letter that would have affirmed he had the green light to publish.

“When it became obvious that the pre-publication review process had been abused in an effort to suppress ambassador Bolton’s speech, ambassador Bolton and his publisher, Simon & Schuster, set the book for release.”