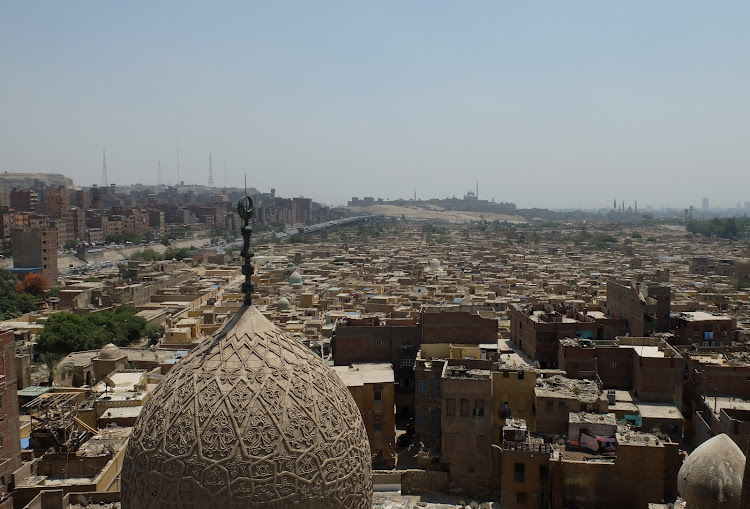 Cairo — In a room overlooking an ancient tomb in Old Cairo, 64-year-old Hossnia El Sayed worries for her future. The basic, stone room is both her home and place of work, and it may not be long for this world.

An Egyptian government official has told the Cairo-born single mother that the tomb she lives alongside will soon be demolished: part of a major bridge project that is already decimating swathes of the fast-growing capital.

“I live here with my daughter. It is like death for us because this is our home and here we have friends and relatives,” she said.

Be it homes, incomes, graves or history — locals say the project will kill irreplaceable parts of Cairo and many say the government is not playing fair when it comes to recompense.

“Even if we were relocated to another place, it will not be the same,” said El Sayed, whose room doubles up as a kiosk from where she sells snacks.

Government officials said people shouldn’t be living in tombs and that it would offer better replacement housing.

El Sayed said the snack shop she runs earns her about 1500 Egyptian pounds ($95) a month, but she fears that will vanish once the nearby tomb and her rent-free home are demolished.

Nor is she the only one worrying. Thousands of people who live or work by the tombs say they are victims, targeted for their prime downtown location and Cairo’s rush to modernise and accommodate its population boom.

In 2020, authorities removed dozens of old burial sites, the tombs of historical figures among them, from the Qarafat or City of the Dead area that was established hundreds of years ago.

Last November, the government announced its intention to remove another 2,700 cemeteries in the area.

The City of the Dead lies inside Historic Cairo, a heritage area subject to its own particular rules when it comes to tearing down buildings or putting up new ones.

Created as a burial site in the 7th century, it has slowly morphed into one of the country's largest slums, home to more than 1.5-million people, according to the latest official data.

As more Egyptians migrated to the capital in search of work and opportunity, they carved out makeshift homes between the low tombs and soaring domes, squeezing family between ancient walls engraved by long-dead calligraphers.

The government says it will ensure those uprooted get alternative housing but has given no details; for their part, residents say they stand to lose precious jobs as well as homes.

Amr Abdel Hady, whose Central Agency for Construction is co-running the project, said the 17km bridge aims to reduce traffic and save time and fuel for motorists.

“It is part of the state strategy to improve its infrastructure and make it easier and faster for people who will travel to the new administrative capital,” he added.

The new zone, being built on the outskirts of Cairo, aims to accommodate 6.5-million residents and ease traffic.

No specific figures are available about the number of people displaced, nor can officials assuage local fears; business owners say they have been offered no compensation to move.

“If I was relocated, I do not know if I would be able to have the same business,” El Sayed said.

Mohamed Abdel Aziz, a 62-year-old craftsman employed by a tile workshop in the City of the Dead, shares her worry.

“The owner told us that the government will demolish this part as well,” said Abdel Aziz, who earns 150 Egyptian pounds a day.

“I have been working in this workshop for 30 years now. For me, it is like home and my only source of income,” he added.

There is much more than money at stake — some families have even been told to move the remains of their loved ones.

“When I buried the body of my father four years ago, it was the toughest situation I faced in my life. But what was tougher was transporting not his body but his bones this time,” said a 28-year-old filmmaker, who did not want to be identified.

Offered no choice, he dug up his family plot and moved 13 relatives to a new site in the 15th of May neighbourhood on the city’s southern outskirts, 23km away.

The cost was his to bear — transport alone amounted to 5,000 Egyptian pounds — and the new burial site was no match.

“Our [old] grave had trees and was wide. It was full of life. But the new one was very narrow and in the middle of the desert,” he said.

While the government paid for the grave — Galal’s family now occupies a 30-metre plot — the Cairo governor’s spokesperson wasn’t available to discuss the move’s emotional toll.

History, too, is at risk of destruction. Heritage experts have come together to raise awareness about the social and economic effects of the destruction and to try to salvage some landmarks.

Tariq Al Murri, a founder of the 27-member group, said the new bridge project would spell death for a region brimming with life, whatever hardships many of its residents endure.

“It is of course inhumane to have people living in the cemeteries but constructing a bridge in the middle of the cemeteries would environmentally and economically harm the historic tombs and would change the entire spirit of this historic place,” he said.

The government says none of the tombs being demolished are listed as ancient buildings, though archaeologists say some belonged to former ministers and top officials as well as famous writers, poets and intellectuals.

Al Murri urged the government to preserve such historic sites — many of them are more than a century old — and use them to foster tourism.

“The City of the Dead can be a great source of hard currency for the Egyptian economy,” he said, citing historic graveyards from Paris to Melbourne that draw millions of visitors.

“Demolishing parts of this historical place is a great loss and a missed opportunity for more tourism revenues and tourist inflows,” he added.