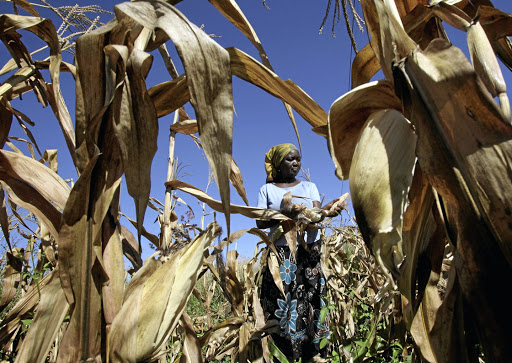 Bulawayo — For 18 years, Thokozile Ncube has been planting her crops in manure-filled holes covered with straw — and every year, she grows enough to feed her family, as other farmers in Zimbabwe’s drought-prone Matobo district watch their crops shrivel.

The traditional planting method helps crops survive droughts by keeping them hydrated for longer than tilling and watering an entire field, said the mother of eight from Gwangazile village, 40km south of Bulawayo.

“Whenever the rain comes, that’s when you do the planting and your crops will remain green, even during a dry spell, until the next rainfall comes,” said Ncube. “I don’t have to worry about buying food [and] I don’t have to sell my livestock to buy food, like some people do during drought.”

As erratic rains and worsening dry spells make it harder to rely on rain to water crops, a government programme aims to get more Zimbabwean farmers to revive the technique known as “potholing”, which fell out of fashion decades ago.

“Some methods using potholes were used by our ancestors to conserve water during droughts [and] now, in the wake of climate change, [they] are being promoted at a larger scale,” said Lawrence Mashungu, a government climate change expert.

Potholing is a form of conservation agriculture, an approach based on three key principles: minimal soil disturbance; crop rotation or inter-cropping — growing two or more crops together; and permanent soil cover using mulch, straw or other crops.

Instead of ploughing and sowing a large area, the pfumvudza method involves planting crops in small holes that trap rainwater, explained Rutendo Nhongonhema, the government’s chief agronomist. “The soil is continuously covered, so the moisture is conserved,” she told the Thomson Reuters Foundation.

The planet’s soils contain more carbon than its atmosphere and vegetation combined, and the tilling involved in many conventional farming methods releases that trapped carbon back into the atmosphere, resulting in climate-heating emissions.

With potholing, farmers only disturb the soil exactly where crops are being planted, releasing less carbon, said climate official Mashungu. “Our low-emission development strategy for Zimbabwe specifically mentions conservation agriculture as a measure that the country must implement to achieve a green economy,” he said.

In August, Zimbabwe’s government started piloting the potholing programme as part of a scheme that aims to reach 1.8-million households by the end of the 2020/2021 farming season with seeds, fertiliser and training.

Farmers started planting with the method this month, agreeing to use it on three small plots, each measuring about 0.06ha, two dedicated to cereal crops and the third for oil seed or pulse crops, such as sunflower, sesame and soybean.

The holes are laid out in 52 rows, one for each week of the year, said agronomist Nhongonhema. If done to the expected standard, a household should be able to harvest enough maize grain from each row to feed a family of six for a week, she added.

Winston Babbage, vice-president of the Zimbabwe Commercial Farmers Union, said potholing is “a good farming concept” and has the potential to improve yields for all types of farmers around the country, from subsistence to commercial.

Finding ways to grow food using less water is a major concern for farmers in Zimbabwe, where unpredictable rains have increasingly plagued the agricultural sector, exacerbating the impacts of an ongoing economic crisis.

According to a crop report published by the Global Agricultural Monitoring initiative in February, the 2019 October to December rainy season was one of the driest on record. That “severely impacted crop prospects”, due to farmers losing crops or deciding not to plant them at all, it said.

In the 2018/2019 season, farming households produced about a third less maize than the year before, according to a report by the Zimbabwe Vulnerability Assessment Committee, a government-led advisory group. It attributed that shortfall to a combination of erratic and insufficient rainfall, the struggling economy and lack of access to agricultural resources.

“The pfumvudza concept is key in allowing [small-scale] farmers to secure their livelihoods,” said Innocent Katsande, who co-ordinates knowledge management for the development organisation Practical Action. It helps farmers “strengthen their resilience towards the harsh conditions they find themselves in”, he said.

Practical Action launched its own conservation agriculture project two years ago in three eastern districts — Mutare, Makoni and Mutasa — and trained more than 79,000 farmers to use potholing by the time it ended in September, Katsande said.

For some, the benefits of the method are not worth the work it takes to prepare a plot with precise, evenly spaced holes.

Sikhathele Moyo, a farmer in Esigodini, outside Bulawayo, said he had only used potholing once, during a drought in 1992. “I remember digging holes when it was hot and this has affected my back until now,” said Moyo, who is not part of either programme.

But Shuviso Vangisai, a farmer and mother of three in Makoni district, said she has reaped rewards from her hard labour. Using the training she received through Practical Action’s project, she was able to produce a good yield this season — three tonnes of maize — for the first time in three years.

“The unpredictable weather has been devastating to my family and many others in the village,” she said, adding that she plans to train more than 100 other farmers in the method. “I am now planning on farming all year round — I have seen how drought-based farming can pay off.”

The country faces a triple threat of climate change, monetary woes and a new economic crisis caused by the lockdown
World
2 years ago

Africa’s legal cannabis industry could generate more than $7.1bn a year by 2023 if more of its markets open up
World
1 year ago

Emmerson ‘Crocodile’ Mnangagwa is worse for Zimbabwe than Mugabe

Emmerson ‘Crocodile’ Mnangagwa is worse for Zimbabwe than Mugabe