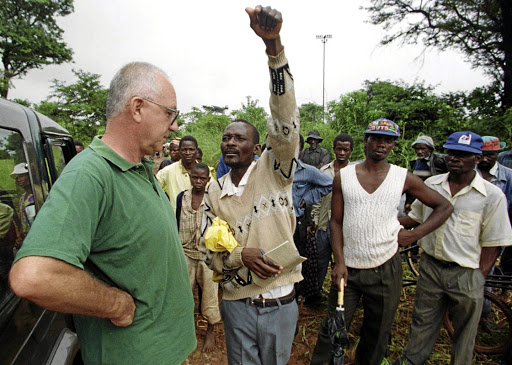 A group of war veterans in Zimbabwe indicates where his followers will settle on Rockwell Farm, owned by farmer Andreo Malus, in March 2000. Picture: HOWARD BURDITT

Zimbabwe may attempt to sell its first international bond to settle a two-decade dispute over the seizure of white-owned commercial farms, even as investor confidence dives.

The debt sale was announced on Wednesday as a possible way to fund a $3.5bn (almost R59bn) settlement with the more than 4,000 farmers who lost their land in often-violent seizures that began in 2000. The takeover slashed exports and soured relations with multilateral lenders and the west, tipping the country into an economic and political crisis that persists until today.

The Southern African nation’s economy is in free-fall. Inflation is running at more than 700%, there are shortages of everything from fuel to food and the failure to repay about $8bn of foreign debt has seen Zimbabwe denied assistance by organisations such as the International Monetary Fund.

Resolving the land dispute is seen as a key step to ending US and EU sanctions and restoring relations with international lenders. It’s unclear, though, how Zimbabwe will lure investors given its economic isolation, which includes targeted sanctions by the US.

“Zimbabwe is very serious about honouring its commitments,” finance minister Mthuli Ncube said in an interview on Wednesday.

“This milestone will show Zimbabwe is keen to move on.”

The land was mostly taken over by black subsistence farmers whose ancestors were dispossessed during colonial times. The compensation, a third of what was initially sought, is purely for improvements carried out by farmers such as dams and roads, rather than the land itself.

Ncube said the country is seeking “guarantees from financiers, even sovereign partners to improve the credit risk profile” of the bonds to boost the confidence of potential investors.

The repayment of the debt, which could have a tenure of 30 years, may be guaranteed by income from commodity exports, the minister said. Zimbabwe mines gold, platinum and diamonds.

Investors may still need some convincing given the deteriorating domestic economic conditions and the coronavirus-inspired global slowdown.

“What type of investor would want to take on that level of risk given the debilitated state of the economy?” NKC African Economics analyst Jee-A van der Linde said.

“This $3.5bn deal could not have come at a worse time, and conditions are unlikely to improve meaningfully over the next 12 months.”

The government’s plan is to raise at least half the money within a year and, in addition to bonds, it may sell municipal land around the nation’s biggest cities to raise funds, Ncube said.

Zimbabwe, which won independence from the UK in 1980 after a bitter civil war, was one of the world’s biggest tobacco exporters before the land seizure, and also shipped crops ranging from paprika and roses, to maize. In recent years it has experienced recurrent food shortages.

Harare government halted trading on Zimbabwe's stock market in June, saying it was being used to undermine the Zimbabwe dollar
World
10 months ago

As the country endures food and fuel shortages, as well as hyperinflation, it is not clear how the $3.5bn agreed to will be funded
World
10 months ago
Next Article