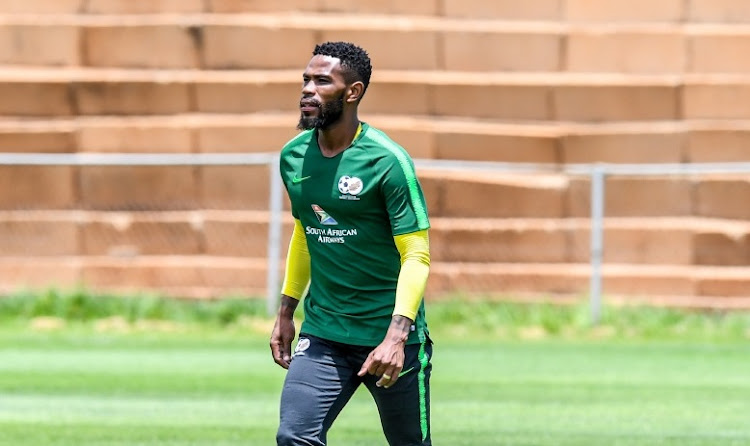 The hugely experienced 32-year-old‚ who led SA to the quarterfinals of the 2019 Africa Cup of Nations in Egypt‚ reunites with new SuperSport coach Gavin Hunt. Hunt and Hlatshwayo won the 2016/2017 Premiership title together at Wits.

Hlatshwayo’s indifferent form at Pirates saw him “amicably part ways” with the Soweto club in June after a difficult two years.

“SuperSport United is delighted to announce the arrival of former Pirates and Bafana captain Thulani Hlatshwayo on a one-year deal with an option to renew‚” Matsatsantsa said.

“Hlatshwayo reunites with head coach Gavin Hunt after a wonderful spell at Wits between 2014 and 2020‚ winning the league title and Telkom Knockout trophy. Hlatshwayo comes to the club with a wealth of experience having played over 300 domestic games and captained Bafana‚ with just over 30 caps under his belt.”

Hunt — who has returned to SuperSport‚ where he won three league titles in succession from 2008 to 2010 — will hope to rehabilitate Hlatshwayo to his best form. The tough defender lost confidence and became notoriously error-prone at Pirates.

“The signing of Tyson is a wonderful addition for the club and he comes with a lot of experience‚” Hunt said.

“He was the Bafana captain and my captain at Wits‚ we won trophies together and he’s definitely ready to get working and to get going again. It’s a huge opportunity for him and for us at the club.”

Hlatshwayo‚ who played just 14 games in all competitions for Pirates in 2021-2022‚ said he would work hard for a starting place at SuperSport.

“SuperSport United is a team that is known to win trophies and I hope I can share my experience‚ which means I have to equally work hard‚” the player said.

“There is competition in the team‚ which is good for the energy around the players and keeping the togetherness‚ and I will make sure I earn my right to play.”

Hlatshwayo was a product of Ajax Cape Town’s youth programme and began his professional career there.

Lentjies, a former player for the Chilli Boys, took over the coaching reins on an interim basis in November 2021 after the club suspended former coach Gavin Hunt and sacked him a month later. The team were in position 14 in the Premiership and Lentjies was in charge for 20 games.

The interim mentor did not change anything as the club finished the season in the same position in which he found it. Explaining its decision to put Lentjies on special leave, the club, notorious for chopping and changing coaches, said it is deliberating on the head coach vacancy.

“Since the departure of coach Gavin Hunt, the club has not permanently filled the vacancy,” Chippa said in a statement. “While pondering the way forward on the head coaching position and holding interviews and allowing the process to take place in the fairest manner, the club has taken a decision to place Kurt Lentjies, who naturally has an interest in the matter, on special leave.

“The club will issue a statement on its decision on the way forward.”

It is reported that Ernst Middendorp is one of the candidates to make a return to Chippa United as the head coach. He is without a job after he parted ways with Maritzburg United at the end of the season.