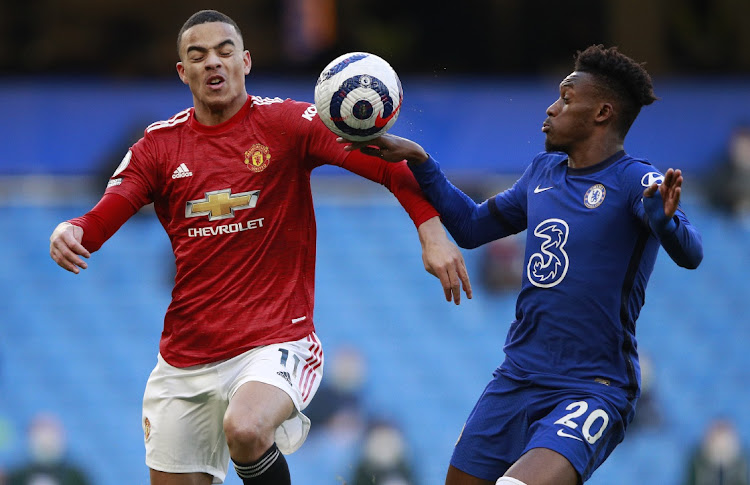 The ball hits the hand of Callum Hudson-Odoi of Chelsea as he is is challenged by Mason Greenwood of Manchester United which was reviewed by VAR during the Premier League match between Chelsea and Manchester United at Stamford Bridge on February 28, 2021 in London, England. Picture: GETTY IMAGES/POOL/IAN WALTON

London — Manchester United’s goalless draw with Chelsea at the weekend is a worrying trend for manager Ole Gunnar Solskjaer while Liverpool boss Jurgen Klopp sees his side snap a four-game losing run.

Man United still falling short against big guns: On the face of it a 0-0 draw away to Chelsea was not a bad result for Manchester United but their record against the big guns this season is lamentable and a key reason why they are nowhere near challenging Manchester City for the title.

United also drew 0-0 at home to Chelsea as they did against Manchester City while they picked up one point from two games against Arsenal, were thrashed 6-1 at home by Tottenham and drew 0-0 away at Liverpool.

While they have accumulated points against the rest, United are not punching their weight in the matches that define great sides and manager Ole Gunnar Solskjaer knows it.

“We have another good clean sheet but the next step for this team is to win these games,” said Solskjaer, whose side face runaway leaders Manchester City next week.

Liverpool back to winning ways — for now:  Liverpool snapped their four-game losing streak with a comfortable 2-0 win over Sheffield United, but they will need to be more clinical in front of goal if they are to beat Chelsea and rise above them in the table on Thursday.

Blades keeper Aaron Ramsdale shut up shop in the first half as Liverpool created plenty of chances but misfired, and it took a Curtis Jones strike and an own goal from Kean Bryan, who deflected a Roberto Firmino shot into the net, to see them home.

Firmino in particular looked short of confidence, and though Sadio Mane did have the ball in the net it was ruled out for offside. Still fielding a makeshift defence, they will need as many goals as they can get if they are to get the better of Chelsea and start climbing towards the European places.

Long season taking its toll on Leicester: Mounting injuries could derail high-flying Leicester City in their bid to secure a top-four finish in the Premier League and Champions League football next season after they suffered a double blow in their 3-1 home defeat by Arsenal.

In addition to getting beaten by the Gunners, the Foxes also lost Harvey Barnes for what could be six weeks with a knee injury. Top scorer Jamie Vardy finished the match with an apparent calf strain but manager Brendan Rodgers said he expected him to be fit for Wednesday’s visit to Burnley.

Leicester faltered towards the end of last season, costing them a place in the top four, and there are some worrying signs that it could be happening again.

West Ham lose, but show top-four credentials:  West Ham, predictably, became Manchester City’s 20th successive victims in all competitions but their performance in a 2-1 defeat showed why they should not be dismissed as top-four contenders.

Michail Antonio grabbed an equaliser at the Etihad and West Ham, rather than parking the bus, showed ambition to take all three points before John Stones won it for City. They remain in fourth spot and with the spirit and unity David Moyes’s team is showing, West Ham fans are in for an exciting couple of months.

“So a big compliment to West Ham — after 26 games they are in the Champions League positions and that is because of a lot of work,” City boss Pep Guardiola said.

Newcastle gain a point, but at a cost: Struggling Newcastle United grabbed a point against midtable Wolverhampton Wanderers, but with Miguel Almiron, Allan Saint-Maximin and Emil Krafth all limping off due to injury, it may prove very expensive.

Krafth hasn’t been at his best lately but Almiron, who hit the post before going off at the break, and Saint-Maximin, who proved a handful throughout, will be indispensable as Steve Bruce’s side enter a run of games that will have a major influence on whether or not they can avoid the drop.